Creating Something Out of Nothing: Mr. Bastani’s Trojan Horse 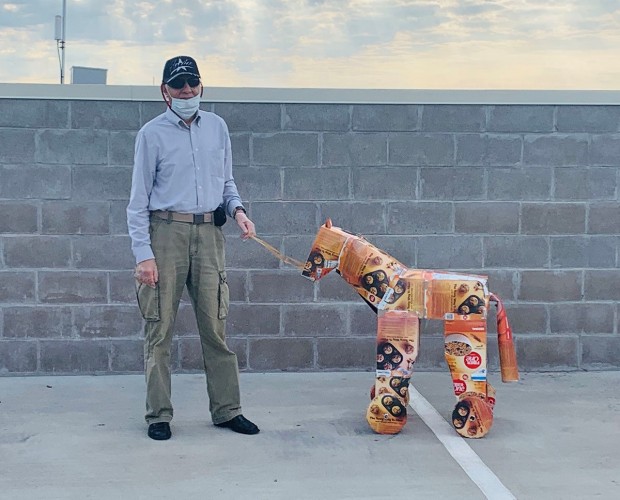 Hormoz Bastani has travelled to 110 countries. He’s climbed the Andes Mountains; he’s soaked up sun in the French Polynesian Islands; he’s worked as a resident architect in Angola. Even so, the 76-year-old retired architect, now mostly consigned to his fourth-floor apartment in West University, does not need travel to unleash his creativity.

Over the past few weeks, as we’ve all spent an increasing number of hours in our homes, Hormoz has been busy. He’s spent much of his time salvaging scraps that many of us would throw away, combining them to create children’s toys. Most notably, he used nothing more than empty cereal boxes and scotch tape to build a three-foot-tall model Trojan Horse – with wheels.

“Instead of throwing [the cereal boxes] away or trying to recycle them, I thought I could probably make something out of them for children,” says Hormoz, who speaks deliberately and with precision. 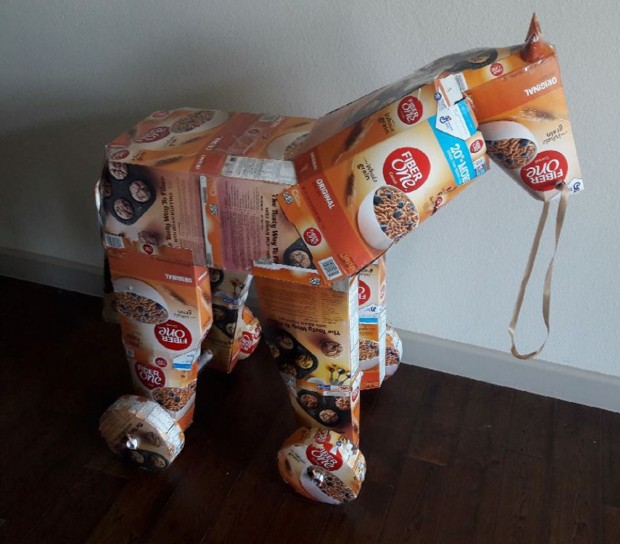 Hormoz says he consumes about one box of cereal a week, and he has been saving the boxes for months. In addition, he saves the direct mail advertisements he receives. Instead of throwing those away, he has made other toys, like a model airplane and Polynesian boats.

For now, the toys remain dispersed across Hormoz’ apartment. But he looks forward to the end of coronavirus, when he can share the toys with his neighbors’ children.

“My feeling is that the kids will enjoy it,” Hormoz says, envisioning young children pulling the Trojan Horse around the complex’s swimming pool. “It’s not something you can go to the store and buy.”

Hormoz says he was motivated to “upcycle” because he has seen the importance of environmental preservation through his travels. Working in third-world countries, Hormoz has witnessed communities trying to develop too quickly without enough regard for the environment.

In Angola, Africa, he recounted, the country quickly became prosperous through offshore drilling and began importing packaged goods from the U.S. and Europe. 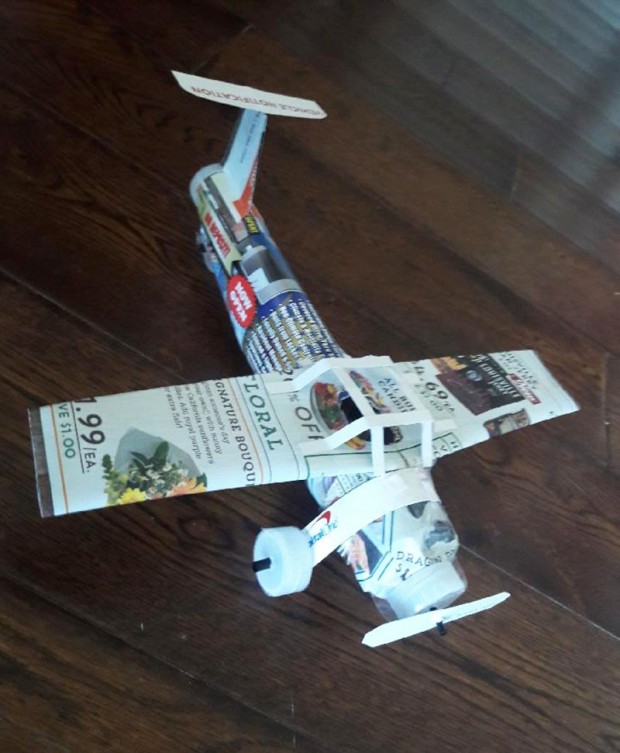 In addition to the Trojan Horse, Hormoz has created other children’s toys like this model airplane. (Photo: Hormoz Bastani)

“A lot of those goods came in packages – like Coca Cola cans or plastic bags,” he said. “The infrastructure was not ready to receive that, so what happened was that people would get it and throw the garbage away in the streets.”

Hormoz worked with the community in Angola to try to encourage them to pick up aluminum cans and set up a designated recycling space.

Back home in Houston, Hormoz translates those learnings by taking personal responsibility for his own consumption. He does his part to mitigate environmental damage by reusing disposable materials, like cereal boxes and cardboard.

Now that Hormoz has completed his Trojan Horse project, he is working on something more complicated:  modeling a wind turbine. When Hormoz traveled to South America, he was inspired to help rural communities leverage their primary resource – wind – to generate heat and electricity. For several years, he has been working on modeling a wind turbine that he hopes to one day take to countries that could benefit from it.

“Right now, we’re all confined. I’m just using what I’ve gathered and the knowledge I have to build something out of nothing.”

Editor’s note: Read more about residents who upcycle in this Going Green story by Tracy L. Barnett and Upcycled Art by Pooja Salhotra.