A New Kind of Ramadan Experience

As far back as Tehmina Masud can remember, the Islamic holy month of Ramadan has been associated with the mosque, where, each night, she would gather with fellow congregants to pray.

Standing shoulder-to-shoulder with others in Houston’s Muslim community, Tehmina found peace praying before an Imam (a Muslim spiritual leader), who would recite passages from the Muslim holy book, the Quran.

This year, Tehmina’s Ramadan looks different, as it does for the roughly 1.8 billion Muslims around the world forced to modify their rituals due to the coronavirus pandemic.

Locally, the Islamic Society of Greater Houston has adapted by offering daily virtual Quran recitations as well as talks by spiritual leaders throughout the day. The call to prayer, typically done communally, is also being broadcast.

“We are all kind of grieving a little bit because we won’t get that connection we want in the community,” said Shazia Ashraf, the operations director for ISGH, which serves all Muslims in Houston. “Most of us find solace in a spiritual sanctuary. That’s what the mosque is for.”

Yet, Shazia says the Islamic faith teaches Muslims to trust God’s will and to look at challenges as opportunities for growth. Social distancing, she says, offers Muslims an opportunity to find new ways to practice spirituality.

Ramadan began on the evening of April 23, and it will continue until May 23. Muslims believe that it was during this month, the ninth month of the Islamic lunar calendar, that the Quran was initially revealed to the Prophet Muhammad years ago. Fasting from sunrise to sunset each day is one of the five pillars of Islam. Other activities associated with the holy month include increased prayer, spiritual reflection and charitable giving.

For Tehmina, a Memorial resident and mother of three daughters, having a dedicated space to pray, even while mosques in Houston remain closed, was of paramount importance. She converted her home office into a prayer room, rearranging the furniture and putting prayer rugs on the carpet.

“We’re trying to recreate the atmosphere,” she said.

Though Tehmina misses the mosque, a silver lining is that she gets to observe Ramadan with her family. Her two older daughters, Samara and Annum, live outside of Houston, but they came home due to coronavirus. The family prays together and congregates in the kitchen each evening to cook.

Other Buzz-area Muslim families have similarly appreciated the chance to observe Ramadan as a family.

Since the stay-home work order was put in place, Abid Yousuf, a supply chain consultant, has been working from his home in Bellaire. His wife Maria, a teacher, is also working from home while his three kids Ali, 16, Humza, 12, and Emaan, 9, take classes from home.

In years’ past, Abid’s younger kids have not been able to observe all aspects of Ramadan. They usually would not go to the mosque for the nightly prayer because of their schedules. Now, they all sit on the couch together and watch a virtual sermon about a different segment of the Quran each evening.

“The kids will ask questions about what’s meant by this or that,” said Abid. “I feel like they are absorbing more and are more engaged. It’s been interesting to see.”

Overall, Abid said, the extra time has meant more time to reflect on what Ramadan means.

“Ramadan is not just about giving up food and drink; it’s about knowing the reason behind it,” Abid said. “We are definitely spending more time thinking about why we are asked to fast.”

Facilitating reflection, families have also found a new kind of simplicity in this year’s Ramadan. Typically, a central aspect of the month is the daily breaking of the fast, or iftar. Families typically take turns hosting elaborate meals for their friends and family, offering a chance to socialize and break bread together.

Because that is no longer possible, the focus has shifted away from socializing and towards introspection.

“I think sometimes the message [of Ramadan] gets lost,” said Ruckshanda Majid, a Bellaire resident. “It can be about who you’re calling or what you’re wearing and the superficial aspects of having a gathering, but certainly being at home and able to focus on each other and our well-being and delving in a little deeper has been a good thing.”

Ruckshanda, a doctor who has been on the frontlines treating patients with Covid-19, and her husband Shiraz Younas, also a doctor, are using the current situation to teach their children about gratitude.

“The spirit of Ramadan is being kind and keeping your control,” said Shiraz. “Going through Ramadan during the current times helps the kids realize they should be grateful – their parents still have jobs, they can still go online for classes . . .  Part of going through Ramadan is being thankful for what we have and appreciating the things we take for granted every day.” 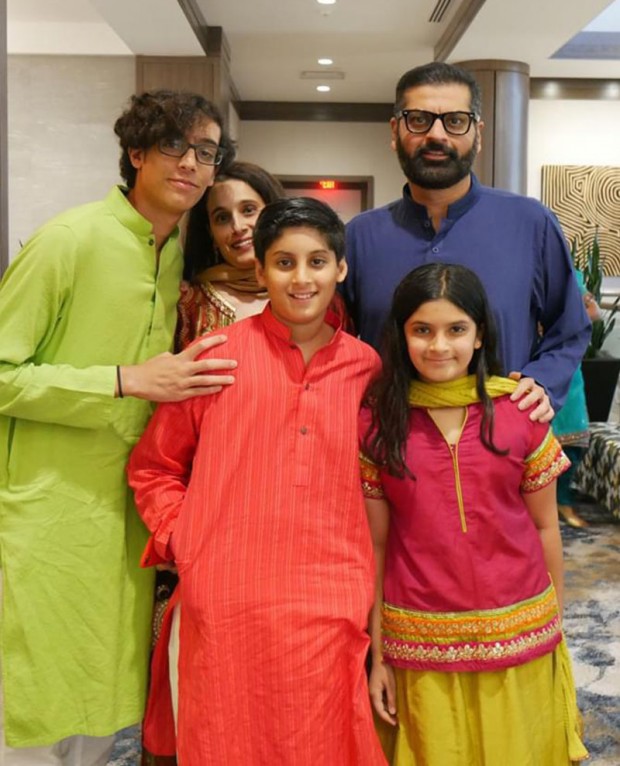 The Yousuf family – dad Abid, mom Maria and kids Ali, Humza and Emaan – at an Iftar dinner in 2019. This year, the family is spending more time cooking with one another as a family. 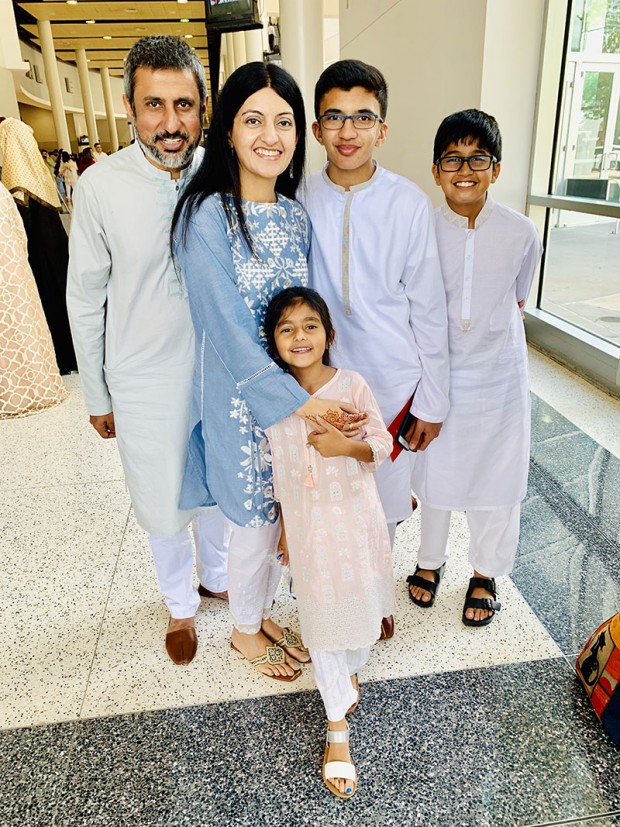 Shiraz Younas and Rukshanda Majid, along with their three kids, Hammad, Usman and Zoya, are adapting to observing Ramadan during coronavirus. Here, they are pictured at a Ramadan prayer gathering in 2019. 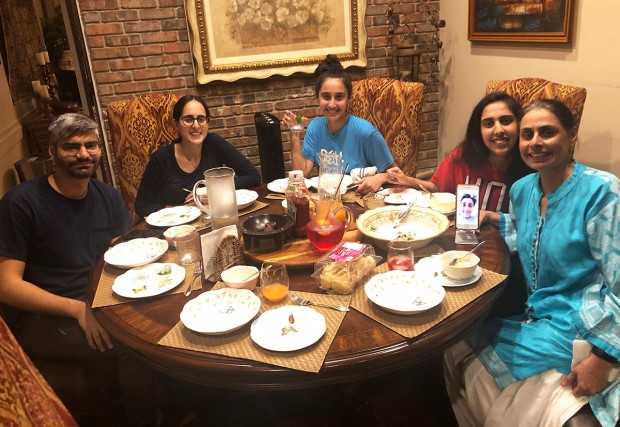 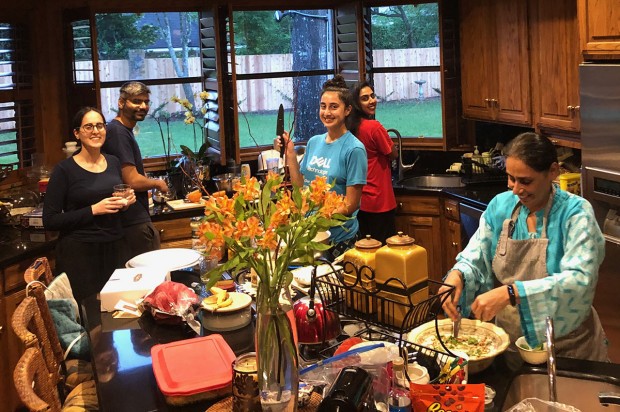 Tehmina Masud’s family cooks together in preparation for Iftar, the breaking of the fast. 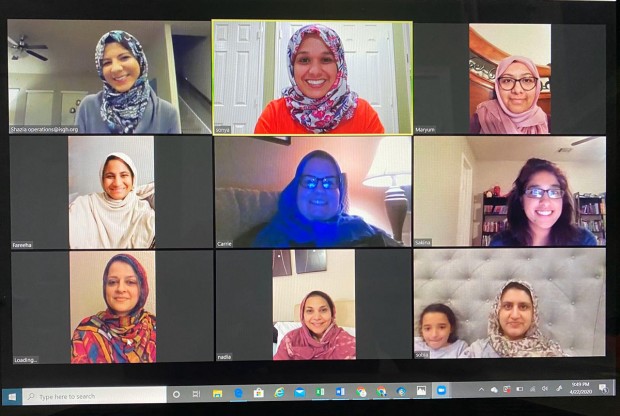 Unable to gather with her friends in person, Shazia Ashraf (at top left) had a virtual gathering with friends to check in on them during Ramadan.