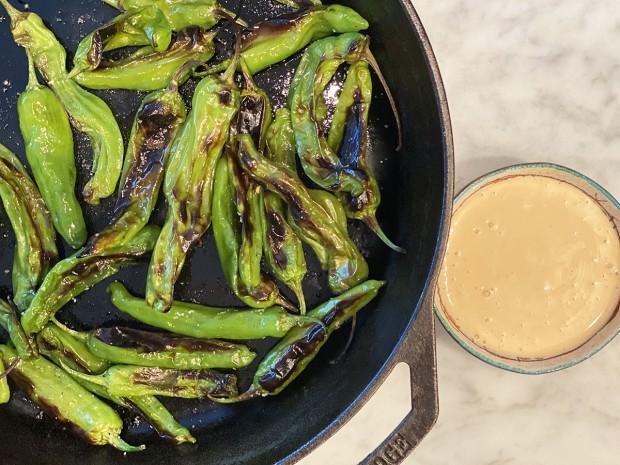 There are snacks, and then there are fun snacks. Shishito Peppers happen to top the list of the fun snacks.

That’s because eating them is a little bit like playing roulette: most of the peppers are mild, peppery and a little bit sweet, but about one in 10 is spicy-hot. There’s no telling which one you’re going to get. The hot isn’t quite as hot as a jalapeño, but when you taste it, you know it’s there. Think just hot enough to make things fun.

Beyond taking your chances on whether or not your lips might burn a little bit, shishito peppers are easy eating. Grab one by the stem, give it a little dunk in a tangy Sriracha Dipping Sauce and pop it back, biting off the pepper from the stem. When charred a little bit, they almost melt in your mouth. And when they do, you’ll be ready for another. They go fast.

Most of us get our shishito fix as appetizers at restaurants. But they are so easy to make, and so fast, that there is no reason you can’t serve them at home with cocktails on a weekday. Or anytime.

For the dipping sauce, stir together the mayonnaise, sriracha and lime juice. Serve the peppers with the sauce alongside.