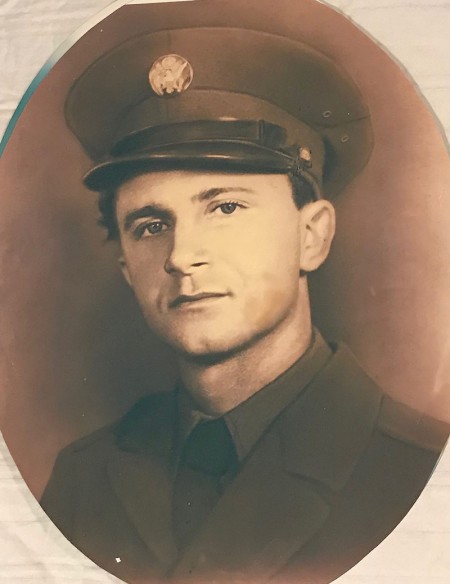 A 4TH OF JULY TRIBUTE After meeting his daughter, Cindy Gabriel learned the story of WWII veteran Ovey Champagne. (Photo courtesy of the Champagne family)

You are what I like about America. No matter who you are, no matter how fair or unfair America has been to you, you are part of its magic mix.

You are America. The people you vote for work for you. They are not the powerful ones. You are – at least that’s the idea.

Right now, I’m avoiding the gym, but I can still exercise my freedom of speech. I’m so grateful to have learned this appreciation of sensing and acting on freedom from my parents.

Once in my early 20s, I mentioned to my mom that I might not vote in some seemingly minor election. She grabbed me by the shoulders, looked me in the eye and said, “People are dying in other countries for the right to vote.” Her hands and eyes convicted me. I voted.

When she was diagnosed with terminal cancer at the age of 52, we held our tears for the doctor’s office parking lot. Mom told my dad and me that hers weren’t really sad tears; hers were more like the tears when an American flag goes by. Who takes a moment like that to get in a commercial for America?

Stories about Washington, Jefferson and Lincoln were mixed into our dinner conversations. “Washington could have been a king, but he chose to limit his power,” my dad would say, as if he and George had hashed it out.

My mother traipsed through cemeteries and courthouses to get the real-people side of the story way before the internet. We saw pictures of skinny people with leathered faces and sunken eyes who looked like they barely had the strength to pose for the picture.

I also saw wills by which slaves were passed from one generation to the next. I have always felt Mom’s empathy for the struggle for freedom.

Mother would have loved the story of the handsome World War II soldier pictured here. Ovey Champagne spoke fluent French. As a devout Catholic, the highlight of his WWII experience (besides not dying) was meeting the Pope while serving in Italy. But he was probably most valued in France where he was used as a translator.

Ovey was born in 1915 in St. Martinville, Louisiana, to a single Creole domestic, Adrienne Labbe. She worked for a white French family, the Champagnes. As his son Marvin put it, “Dad’s father apparently got with the help.”

Ovey was younger than 4 when his mother died. While his father’s wife and other children seemed unaware of him, other Champagnes saw this as an opportunity to raise Ovey. Sensing a possible kidnapping, an aunt and uncle on Ovey’s mother’s side took him and moved to Rayne, Louisiana.

This move meant that Ovey would be officially raised as “Negro.” He was schooled through the sixth grade, though his intelligence and curiosity took him much further.

He was honorably discharged in 1945, earning three medals. The papers also indicated that he participated in the North Apennines battle in Italy, though his official title was Mess Hall Sergeant.

His opportunity to get out of this limbo came down to a typed X on his discharge papers at the end of the war. “You can be white for the rest of your life if you just say it now,” came the offer from the personnel officer handling his paperwork.

Ovey wanted to go back to his people and the life he knew in Rayne, Louisiana, where he became a paint contractor and community pillar, including his annual service as Santa Claus for the black children of Rayne. Following the death of his first wife, he was married to his beloved Gracie for 59 years, fathering a total of 11 children.

I passed one of them in the hall of an office near NRG Stadium one day about 10 years ago. I knew instantly I liked Lisa Champagne, with her engaging smile and Cajun accent. We were destined to be friends at our Harris County government jobs. If Lisa had not told me she was African-American, which she proudly does, I would not have known.

Lisa also grew up in Rayne, one of the towns known for housing German POWs. After the war, prison doors flung open and let out these former enemies. Many chose to stay. Black veterans had to watch while German soldiers they had fought were allowed into establishments where they were forbidden.

Lisa mentioned that as late as the early ’70s there was at least one local bar with the “Brown Paper Bag Rule.” If you were darker than a grocery bag, you weren’t welcome. Lisa was never subjected to this humiliation, and would often identify herself as African-American when she thought something racially insensitive was about to be said in her presence.

All 11 of Ovey’s children have found their pockets of freedom. They work in industry, education, and government. The three youngest, including Lisa, all have master’s degrees.

Happy birthday, America! So grateful to exercise my freedom to tell this story.