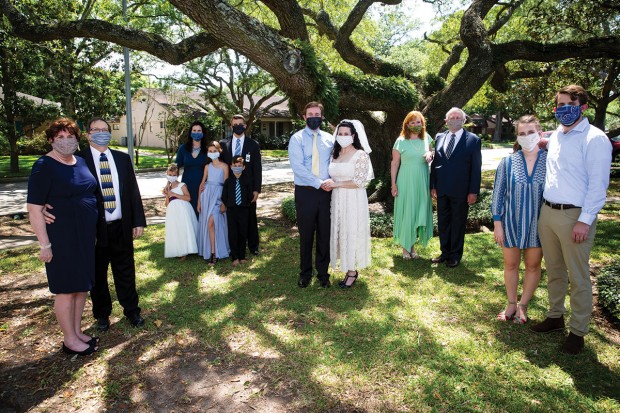 TRUE LOVE When the quarantine dashed plans, Amanda Sorena pulled off a backyard wedding for her sister, Kaitlin. From left: Karen and Richard Johnson; Amanda and Joseph Sorena with children Sophia, Michael and Angelina; bride and groom Matthew and Kaitlin Truelove; Dana and Brian Truelove; and Annabelle and James Truelove. (Photo: Annie Mulligan)

It wasn’t the big church wedding surrounded by hundreds of family members and friends that Amanda had pictured for her younger sister. The coronavirus put those plans on hold. But the backyard wedding in Meyerland was a fitting spot for Kaitlin and Matthew to wed after they met at Sorena’s house three years ago in the aftermath of Hurricane Harvey.

“Getting the two of them married was the most important thing,” says Amanda, who has worked in event planning and organized the wedding. “The big party and celebration can always come later.”

Kaitlin and Matthew planned to get married on May 2 at Magnolia Bells in Magnolia. Wedding invitation RSVPs were supposed to arrive just as concerns about the coronavirus in the United States began to escalate.

“When major moments in our life happen, the world seems to be imploding,” says Kaitlin, who works as a medical assistant.

In the weeks leading up to the wedding, Amanda tidied up her backyard, planted flowers, ordered a flower arch for the ceremony and a silver and gold balloon arch for her driveway. She bought a cake from a local bakery, borrowed tables and tablecloths, and reached out to Westbury resident and freelance photographer Annie Mulligan to photograph the event from a distance. Neighbors lent vases to decorate the tables. “We kept it simple,” Amanda says.

Amanda and Kaitlin’s parents, Richard and Karen Johnson; the groom’s parents, Brian and Dana Truelove; the groom’s brother and wife, James and Annabelle Truelove; and Amanda’s husband, Joe, and their three children – Sophia, 10, Michael, 7, and Angelina, 7 – also attended the ceremony. Joe decided to get ordained online so he could officiate.

“We've been in such dark times,” Kaitlin says, “that I think it was an escape for people, something happy that they could focus on.”

With stores shuttered, not all of the bridesmaid and flower girl dresses were ready. Amanda instead chose formal wear from her closet. Kaitlin bought a new dress from local designer and Project Runway winner Chloe Dao. Karen Johnson sewed masks for guests that served as practical party favors, and along with Matthew’s mother, read scripture during the ceremony.

The family streamed the wedding on Facebook Live, where more than 200 people tuned in. They also set up a Zoom meeting so that friends and family could watch together. Afterwards, the 11 guests ate wedding cake, and the adults toasted with champagne. Family groups each sat separately at their own table. Amanda’s daughters lined up to catch the bouquet. Then, Kaitlin and Matthew strolled out front to meet several dozen friends, family members and co-workers who arrived for a drive-by reception.

“It may not have been what we planned, but the ceremony had so much significance,” Kaitlin says. “It was amazing.” Adds Amanda, “the day felt organic, and stripped down to what really matters.”

Kaitlin and Matthew first met in August 2016 when Matthew helped remediate Amanda’s house days after it flooded during Hurricane Harvey. Amanda was impressed with Matthew Truelove from the start. “He was a guy who showed up for a stranger,” she says. “His name being Truelove was icing on the cake.”

Kaitlin says, “Amanda called me and told me I needed to put mascara on and come over. There were a lot of guys at her house. Matthew was the first one I talked to.”

After meeting, Kaitlin tracked down Matthew online. For their first date, they went to a showing of Murder on the Orient Express. Two years later, Matthew proposed to her on Labor Day weekend at her parents’ home in Bellaire before more than a dozen family members. Her parents provided the cover story – they wanted to invite his family over for a barbecue. When Matthew rang the doorbell that day, he held Kaitlin’s dog, dressed in a tuxedo, and with the engagement ring attached to the collar.

At the backyard wedding during the drive-by reception, from their cars, friends in masks waved and shouted their congratulations to the newlyweds. One of Kaitlin’s co-workers tossed rose petals at the couple from their car window.

“To me, this felt as special as any wedding ceremony I’ve been to,” Amanda says. “If they can roll with all of this and figure out how to make joy in challenging times, their marriage is already off to a great start.” 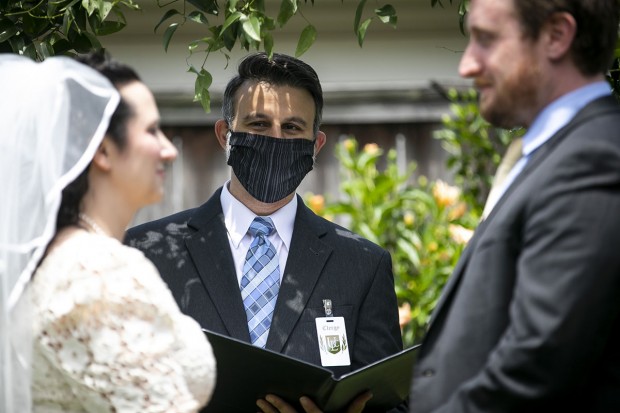 TIED THE KNOT Joe Sorena (pictured, with the bride and groom) got ordained online so he could officiate the ceremony. (Photo: Annie Mulligan) 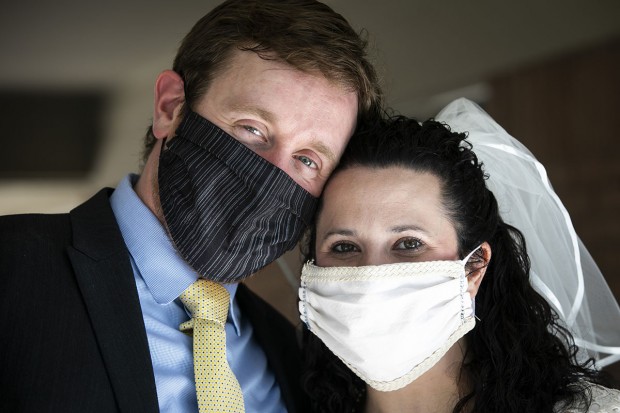 MASKS ON Johnson and Truelove were forced to cancel their formal wedding because of the coronavirus. (Photo: Annie Mulligan) 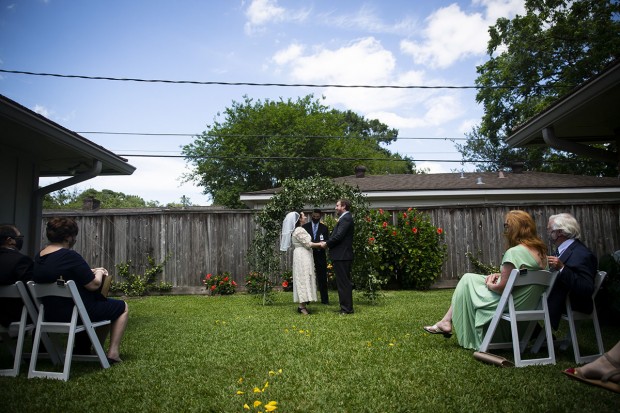 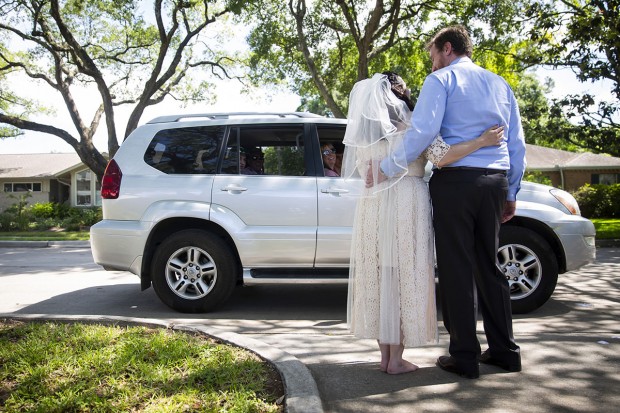