With statements like “Stand up against racism” and “Be an ally” chalked in bright colors on the pavement at Evelyn’s Park, students from The Emery/Weiner School gathered – wearing masks and standing several feet apart – to raise awareness for the Black Lives Matter movement.

Initiated by Emery/Weiner students Misha Berry and Bella Deutser, both 17, the event was held on Thursday afternoon, just 10 days after Houston native George Floyd died in the custody of Minneapolis police officers, shocking the nation and renewing calls for racial justice. Feeling a sense of urgency to do something in response, Misha had texted her friends on Monday evening to see if they wanted to hold a bake sale and donate the proceeds to racial justice focused organizations.

“I guess I was a little tired of seeing the same things posted and reposted [on social media] while people were lying in their beds,” said Misha. "I want to do as much as I can.”

Misha’s friends immediately jumped onboard the idea, with several students volunteering to help bake cookies and others helping spread the word to friends from Houston high schools. Cassidy Rubenstein worked on securing space for the event at Evelyn's Park and Jordyn Whitaker helped expand the event from solely a bake sale to a larger platform that also included opportunities for people to learn more about the Black Lives Matter movement and voice their allyship.

“I don’t know firsthand what black people are going through, but I wanted to play my part in creating equality and helping end police brutality,” said Carly Schneider, an Emery/Weiner student who helped orchestrate the event. “I just really wanted to help whatever way I can.”

Several of the students who helped with the bake sale said that they had wanted to attend the rally and march for George Floyd this week, but that they or their families felt uncomfortable attending due to the coronavirus pandemic.

At Thursday’s event, Misha and her friends took steps to maintain social distancing and hygiene. For instance, everyone was encouraged to wear a mask, and “X’s” marked on the ground indicated where attendees could stand while still maintaining distance. Bottles of hand sanitizer were also readily available.

The funds raised from the bake sale are being donated to three different organizations that Misha identified as still needing support. When people purchased an item, they selected which of the organizations they wanted to support: Know Your Rights Camp, Black Visions Collective or Mobile Outreach and Outdoor Drop-in (MOODI).

At a table next to the baked goods were four students encouraging attendees to pledge their commitment to standing up against racism. They signed a slip of paper with a pledge written on it, and then taped that piece of paper onto what was designated as the “pledge wall.” Also taped to the wall were several QR codes that people could scan using their smart phones. Each QR code was connected back to a resource for people to learn more about racism, or to sign a petition asking for justice for a victim of police brutality.

Some parents of students attended the event and shared they were proud that students were taking action. Patricia Ritter, Executive Director of Evelyn’s Park, echoed that sentiment, saying she was happy to see the students use Evelyn’s Park as a community hub.

“I think this is a great example that children can make a difference,” said Patricia. “When you are fueled with passion for a certain cause and able to implement and make a difference - it gives you a sense of purpose. This purpose makes a difference.”

Editor's note: For more, read Houston Youth Respond to the Death of George Floyd by Buzz summer intern Lauryn Kapiloff. Also, see Responding to Acts of Racial Violence by Pooja Salhotra for ideas of ways to support the Floyd family plus a list of books, films and shows that discuss racism. 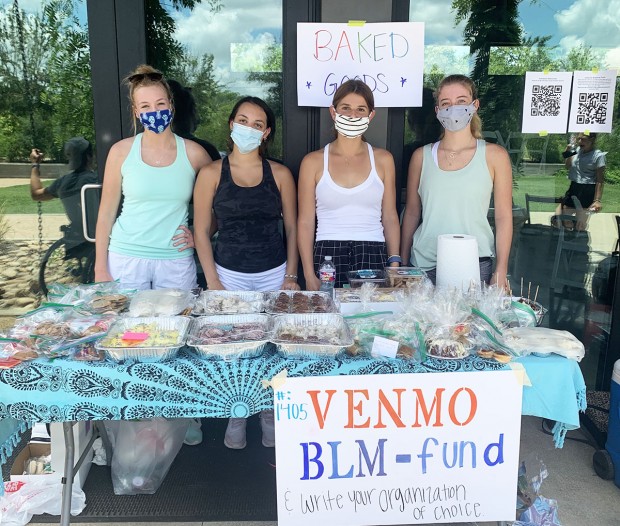 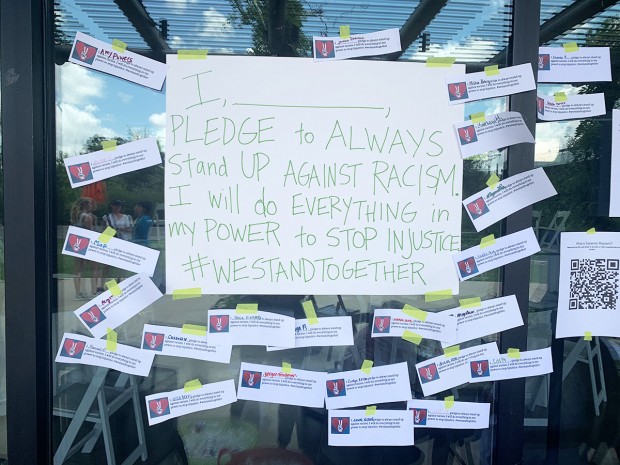 On a “pledge wall” attendees were invited to share their commitment to always stand up against racism. (Photo: Pooja Salhotra) 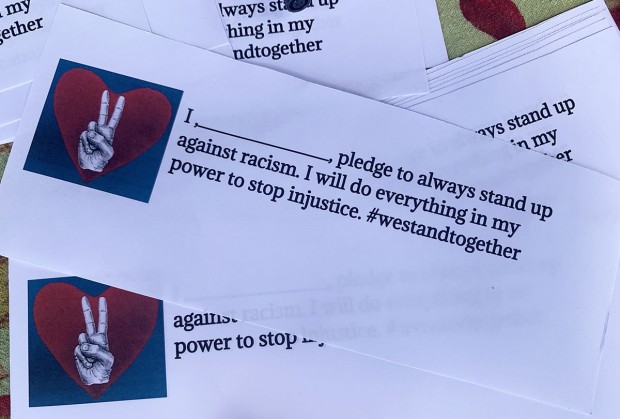 Attendees signed these pledge cards to commit to standing up against injustice. (Photo: Pooja Salhotra) 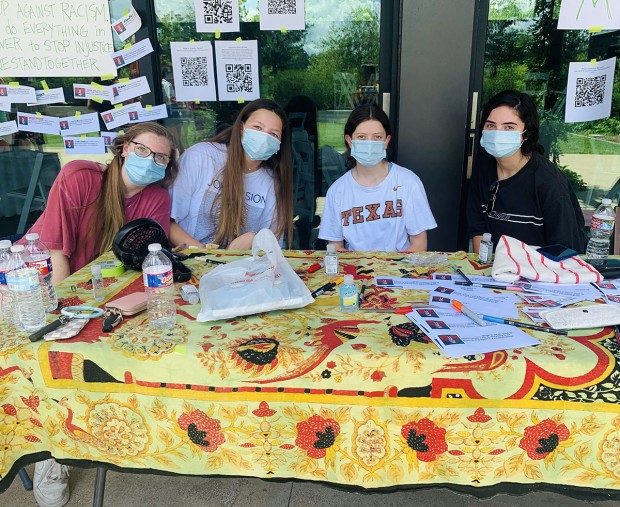 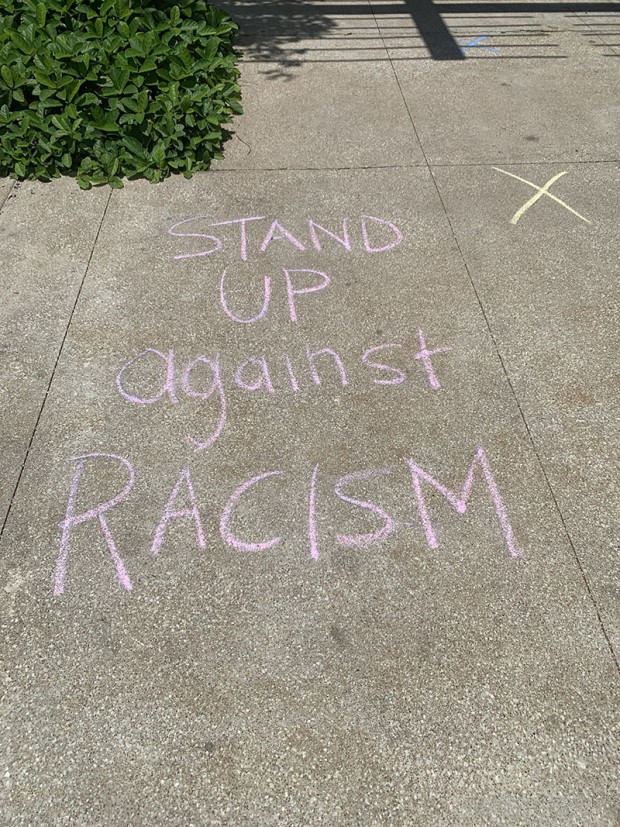 Phrases like this one were chalked on the pavement at Evelyn’s Park to build awareness for racial injustice. (Photo: Pooja Salhotra) 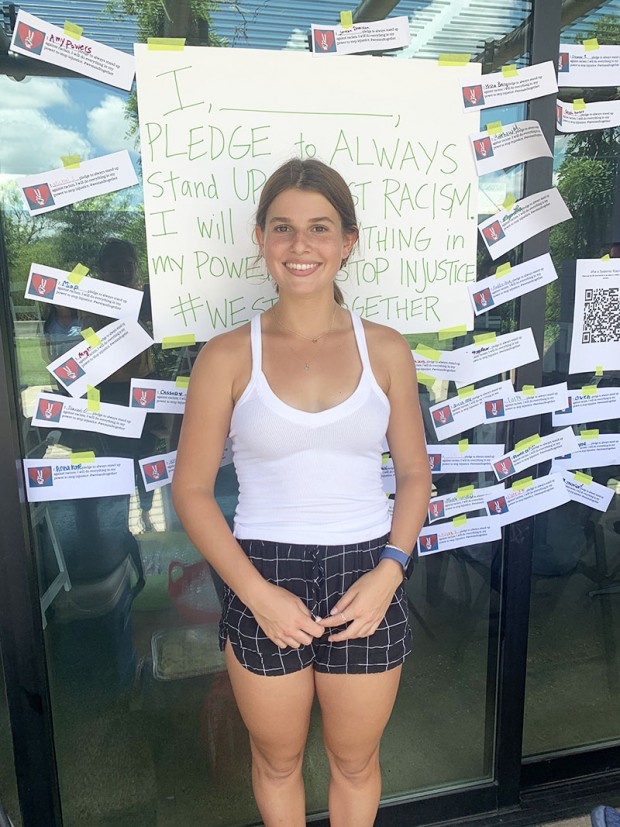 In response to the killing of George Floyd, Misha Berry organized an event to bring students together to discuss racial injustice and to raise money for the cause. (Photo: Pooja Salhotra)