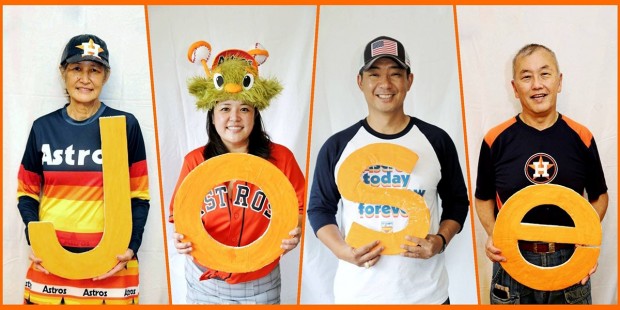 Barbara Moon (aka the Astros Sign Lady) and her family and friends pose with individual letters that spell Jose (as in Jose Altuve)! They look forward to finding their cardboard selves! Audrey Moon created this collage of the four of them with their letters. Pictured are: Barbara Moon holding J, Audrey Moon holding O, Nguyen H. Le holding S and Jimmy Moon holding E.

Hey, ’Stros fans…the wait is officially over! The Houston home opener vs. the Seattle Mariners is Friday, July 24 with first pitch at 8:10 p.m. CST. Due to Covid-19 precautions, this unique 2020 Major League Baseball season has been shortened to 60 games and fans are not allowed to watch games in the park.

However, some hardcore orange-and-blue super fans won’t miss rooting for the ’Stros from Minute Maid. They have committed to sitting (and sleeping) in their seats for the next 12 weeks. These professional seat fillers are so intense, they won’t even flinch when a ball comes near their face.

The Astros are offering a special fan cut-out promotion this year. The cut-outs will be in the outfield to help the players feel a little more like the fans are with them in the Juice Box.

Here’s how it works: Upload a nice photo of yourself (see the website for photo rules) and a tax-deductible donation of $100. At the end of the season, you’ll be able to pick up your cut-out plus a complimentary 2019 American League Championship Series Replica Ring. The real win is that the proceeds benefit the Astros Foundation’s ongoing efforts in the greater Houston area.

“We are grateful for the continued support of the foundation through the purchase of fan cut-outs. I can hardly wait to see the smiling faces supporting our home team and the foundation’s good works,” said Twila Carter, executive director of the Astros Foundation. 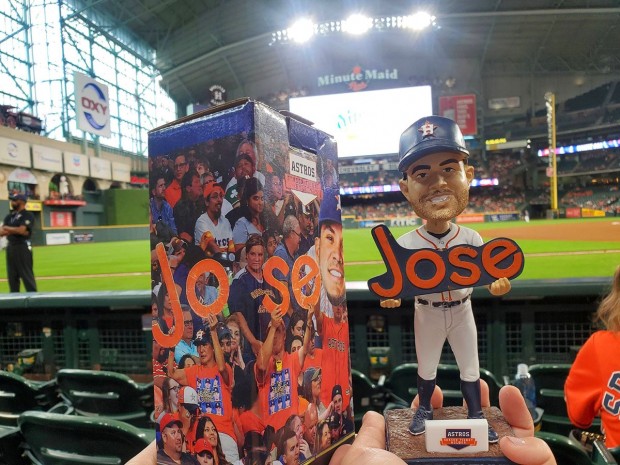 Barbara Moon and her family were thrilled when the Astros created a special edition Jose Altuve Bobblehead inspired by the Moon’s "Jose" sign. Their picture is even on the box!

Everyone knows the Astros have amazing supporters, such as legendary fan, Barbara Moon. Barbara sits near third base and is lovingly known as “The Sign Lady” for holding up creative signs including j-o-s-e when Jose Altuve is up to bat. Barbara’s jose sign was the inspiration for a Jose Altuve bobblehead with him holding the jose sign!

Nguyen explained how he became part of the Moon family. “I met the Moons in 2013 when I got seats in their section and they basically adopted me as their baseball son! We’ve had a great time traveling together and cheering on the Astros.” 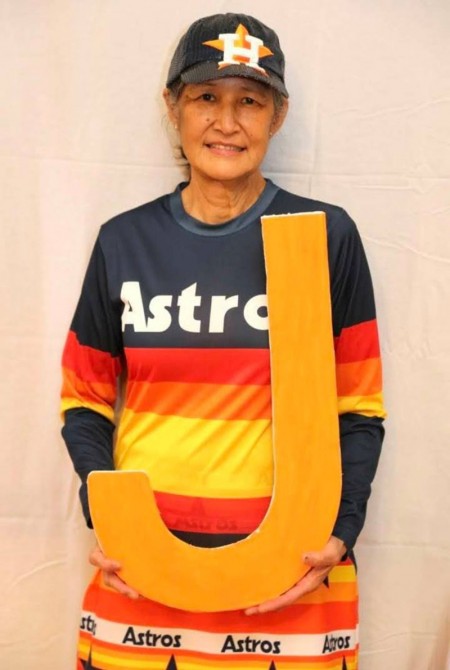 Barbara Moon - known as the "Astros Sign Lady" - holds up the letter J for Jose Altuve, participating in a special Astros fan promotion to provide cut-outs of fans in the stands.

Audrey shared, “It’s pretty funny because the past four months, when my friends ask about my mom and sound concerned, they aren’t concerned about her health and Covid-19, they’re worried about her not having a baseball season!”

Cut-out quantities are limited. The sooner you can visit the link to upload your fan photo, the higher the likelihood you, too, could be hanging out at Minute Maid for three months!

Another way to support the cause? Let Orbit give a shout-out ($50) to your favorite Astros fan. Proceeds benefit the Astros Foundation.

Whether we’re cheering on the ’Stros from home or from Minute Maid Park – in cut-out form – let’s keep rooting for our team. See the 2020 Astros schedule here.