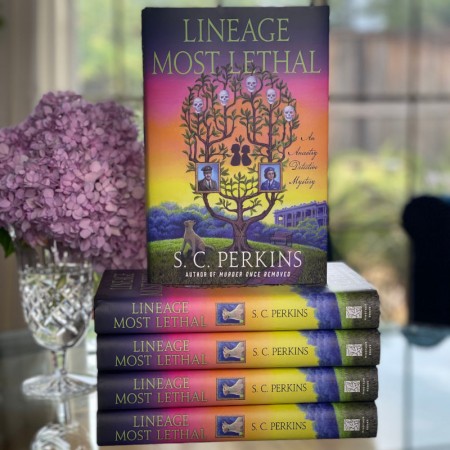 S.C. Perkins' second novel in the popular Ancestry Detective series, Lineage Most Lethal, was published last week to much acclaim.

Her second novel in the Ancestry Detective series, Lineage Most Lethal, was published last week to much acclaim (and with a stellar cover). I love highlighting local authors and reached out to Stephanie to learn more about her latest mystery, her research, advice for aspiring authors, and what books she has on her nightstand.

What inspired you to start writing this latest novel?

My main character is professional genealogist Lucy Lancaster and I’ve known for a long time that I wanted to introduce her grandfather, who she calls Grandpa. I also knew I wanted him to be a World War II veteran. At first, I considered waiting a couple of novels to introduce Grandpa, but then I realized the members of our Greatest Generation are in their nineties and passing away at too fast a rate. So, I decided to introduce Grandpa now, and I’m so glad I did. He was such a wonderful character to write!

How long have you been writing? 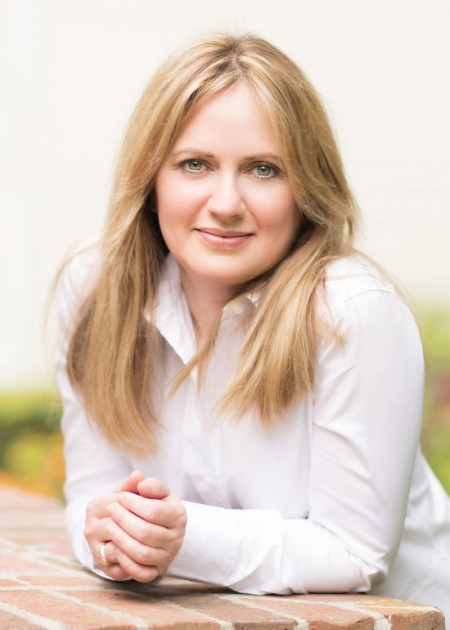 I wrote my first poem somewhere around age six or seven, and later took journalism classes while at Memorial High School (class of ’89). I then majored in journalism at Texas A&M University and soon began freelance writing and editing. I started my first novel around 2005, and I’ve been writing novels ever since.

However, I think the first time I became aware that I had a particular skill with words was in my Honors English class at Memorial High School. My teacher, Mrs. Fowler, wrote, “Wow!” on one of my essays about Ernest Hemingway and gave me an “A.” I’ll always be grateful to her for that bit of encouragement!

How do you do research for your books?

I love the research part and sometimes have to stop myself from doing too much. I spend a lot of time researching on the internet, and then I go to the library and/or buy other books I need. I also like to interview real experts as much as possible.

I’ve been lucky enough to have become friends with a professional genealogist, a doctor and researcher, a poisons expert, and a sergeant with the Harris County Sheriff’s Office, all of whom are kind enough to answer all my questions. For Lineage Most Lethal, I also interviewed a staff member at the National Archives and corresponded via email with the International Spy Museum, both in Washington, DC, which was a lot of fun!

Thus far, I’ve been incredibly lucky. My agents are wonderful, as is my publisher, Minotaur Books. I love the writing, the editing, and seeing my book go from my computer screen to a real, beautiful book.

One of the most wonderful parts is when your book releases and you start getting feedback from readers. It’s the most amazing feeling! I’m so grateful to readers, reviewers, libraries, and, of course, independent bookstores for all they do to help authors and our books. Houston has four amazing [independent] bookstores - Murder by the Book, Blue Willow Bookshop, River Oaks Books, and Brazos Bookstore. They can order you anything you like if they don’t have it in stock, so I encourage you to shop local for your books if you can!

If I had to name a least-favorite part, I think it would be that authors must constantly promote ourselves. It’s a fine line to walk between marketing yourself so as to get your name out and feeling like you’re being pushy. I can only hope I walk that line well!

Do you have any advice for aspiring writers?

First, write what makes you happy. Second, read, and keep reading. Third, until you get an agent, pay a professional editor to edit your work. It’s expensive but worth it. Fourth, get involved in writing organizations such as The Writers’ League of Texas, Sisters in Crime; Houston chapter, Mystery Writers of America and others, depending on your genre.

Many writing conferences are online now, and you always learn from the panels and the authors’ own stories. Writing organizations are also offering some fantastic webinars on everything from writing to querying to publishing. They’re absolutely worth your time.

I’m working on book three in my series, which is titled Fatal Family Ties, and will be out July 20, 2021. I’m having a blast researching and writing it!

What are you reading now?

Since my deadline for book three is fast approaching, I’m not reading anything for another few weeks. But there are several I can’t wait to jump into after I turn in my first draft, including Allison Montclair’s A Royal Affair, Rhys Bowen’s The Last Mrs. Summers, Emily Henry’s Beach Read, Lauren Ho’s Last Tang Standing, Celia Rees’ Miss Graham’s Cold War Cookbook, and James Benn’s The Red Horse.

If you need something to read, pick up Stephanie’s books at your local indie bookstore or from the library!

Conversations from a Page is hosting a Curated Book Discussion over Zoom for Just Mercy by Brian Stevenson on Wednesday, Aug. 26 at 11 a.m. CST. (cost-$5 or $30 for an annual pass). For more book recommendations and bookish thoughts, see @ThoughtsFromaPage on Instagram, the Continuing the Conversation newsletter, or Cindy’s Reading Recs.