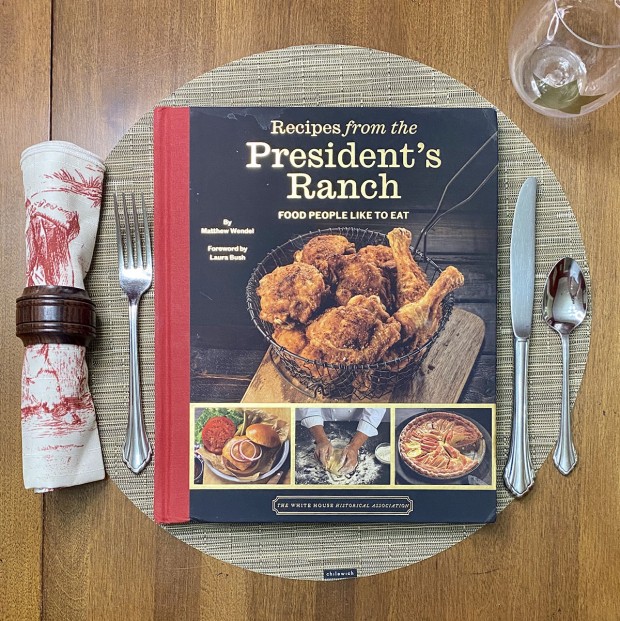 This week’s cookbook has a Texas connection and provides glimpses into cooking for a president.

Andria Frankfort, who writes Buzz column Back Porch Table, and I enjoy collaborating on our cookbook reviews and recipe testings. Before today, Questlove’s Mixtape Potluck and Houston Cooks: Recipes from the City’s Favorite Restaurants and Chefs by Francine Spiering were hands down my favorite of the cookbooks that we have chosen to highlight and review. However, this week’s cookbook, Recipes from the President’s Ranch: Food People Like to Eat by Matthew Wendel now joins them.

Published by the White House Historical Association and with a foreword by First Lady Laura Bush, Recipes from the President’s Ranch is a delightful, charming, and non-political glimpse into what it was like to cook for the most powerful man in the world, his family, and the world leaders who visited them.

Matthew Wendel grew up in Danbury, a small town southeast of Houston, with a mother who loved to cook. Throughout high school and college, he worked at various restaurants and catering companies, but when he graduated, he went to work at the Texas Attorney General’s Office. Years later, he realized he missed cooking and left the AG’s Office to return to the food world. While working with Word of Mouth Catering in Austin, he was sent to the Texas Governor’s Mansion where he encountered the Bush’s and eventually began catering for them himself.

When the Bushes left for Washington, D.C., they asked Wendel to come with them. He cooked for President George and Laura Bush at Prairie Chapel Ranch (the Bush’s Texas family ranch) and at Camp David for the 8 years President Bush was in office. Part cookbook and part short memoir, Recipes from the President’s Ranch: Food People Like to Eat is divided into two sections: 12 chapters chronicling Wendel’s early years through his time spent with the Bushes while George W. Bush served as President of the United States and then a second section containing recipes, divided into six basic categories.

While the cookbook contains a plethora of fabulous recipes that I cannot wait to try, the portions of the book that resonated the most with me were those about life at Camp David and the behind-the-scenes glimpses at working for a president. Wendel cooked for famous dignitaries such as the King and Queen of Spain, Britain’s Prime Minister Tony Blair, his wife Cherie Blair and their children, the Prime Minister of Denmark and his wife, and many more. In addition to describing those events, Wendel includes fabulous photos of these events and often the menus that were used for each head of state’s visit. He includes fun asides such as when German Chancellor Angela Merkel and her husband visited Prairie Chapel Ranch and stood at the grill with him while he cooked dinner, peppering him with questions about his techniques and shared their love of grilling with Wendel.

While the holidays are still a long way away, Recipes from the President’s Ranch: Food People Like to Eat will make a great and unique gift, especially for Texans, no matter their political affiliations. The cookbook tells Wendel’s story and provides a behind-the-scenes peek into what it was like to cook for the President of the United States.

Conversations from a Page is hosting a Curated Book Discussion over Zoom for Just Mercy by Brian Stevenson on Wednesday, Aug. 26 at 11 a.m. CST and for The Last Flight by Julie Clark on Sept. 24 at 11 a.m. CST. Cost: $5 or $30 for an annual pass.