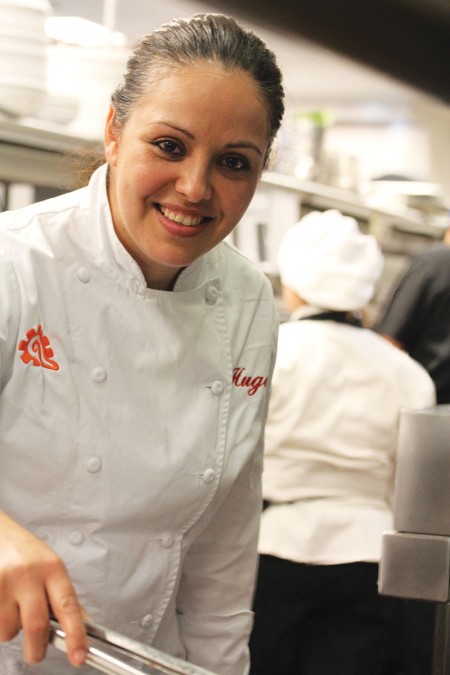 In the restaurant biz, the number of female executive chefs is small. Even fewer are female corporate chefs. H Town Restaurant Group corporate chef Beatriz Martines would like to see more women in the kitchen, but she knows the challenges.

Only 22 percent of chefs and head cooks are women, according to the Bureau of Labor Statistics. Joanna James’ 2018 award-winning film A Fine Line examined why fewer than 7 percent of executive chefs and restaurant owners are women. The female chefs in the film said it is tough balancing work and childcare.

For Beatriz, 38, this means getting up at 5:30 a.m. and making breakfast and dinner for her family, along with doing a load of laundry. If she can’t eat with her children, she can be with them through her food. Then she leaves to meet with her boss, chef-owner Hugo Ortega, or oversee the menus and kitchen at Backstreet Cafe, Hugo’s, Caracol and Xochi.

Growing up in Guadalajara, Mexico, who taught you to cook?

My grandmother had a fonda, where she would sell all types of homey food, like enchiladas, sopes, tacos and moles. She had six daughters and three sons, and they all helped. When I was 7, I started flipping tortillas. I never looked at it as being work. For me, it was fun.

You married your husband, Juan, at a young age. How did you both end up in Houston?

My husband is from here, but his family vacationed in my hometown every summer. His house was three, four houses from ours. We married when I was 18; he was 21. When we had our first kid, he asked me, ‘How do you see yourself in five years?’ I told him I wanted to go to culinary school, but, with the baby, that was over, right? He said, ‘Why?’

You failed the English proficiency test to get into the Art Institute of Houston’s Culinary Arts program the first time, but you passed on your second attempt. How were you able to juggle motherhood, a full-time job at a school cafeteria, and the cost of a $70,000 degree?

I’m almost done paying off my loans. At the time, I was working as a lunch lady and catering for friends on the weekends to earn money for school. By then, I had two kids. I would get them ready at 5 a.m., bring them to my mother-in-law by 6, then head to the cafeteria. I had to be there by 6:30. I would get home at 3 p.m., make the kids’ dinner, then go to the bus station for an hour ride to the Art Institute. I would get home around 11:30 p.m.

You interned with a reality star, Mexican chef Aquiles Chavez, who promoted you to be his sous chef at La Fisheria while you were still in school! You received a culinary arts diploma in 2013, followed by a baking and pastry degree in 2014. Shortly afterward, you departed for Catalonia, Spain, for an apprenticeship at the renowned three-star Michelin El Celler de Can Roca.

El Celler was intimidating. Everything had to be perfect. After this, I am not afraid to work in any kitchen. I saw more experienced chefs go outside to throw up when it got to be too much, but I didn’t leave my babies for three months to fail. I didn’t understand Catalan, so I taught myself the basics and learned to work faster, better. One day, someone said, ‘Hey, two chefs from Houston are here; you may know them.’ Whoa, it was chef Ruben [Ortega] and chef Hugo [Ortega]. Chef Hugo told me later that he called his wife and told her that there is a girl here he wanted to hire. His wife replied, ‘Well, what are you waiting for?’

Five years ago, you started as his culinary director, then he promoted you to corporate chef. The kitchen is a very competitive field. What is it like for a woman to be in charge?

It is hard when you’re one of the new ones, and even harder when you’re a woman. Some men don’t like to take orders from a woman or be their superior…, but over time, I earned everybody’s trust by showing them that I know what it takes to do the job.

You love Hugo’s because it reminds you of the food from Mexico. What are other favorites?