From City to Farm

Where every turkey is pardoned 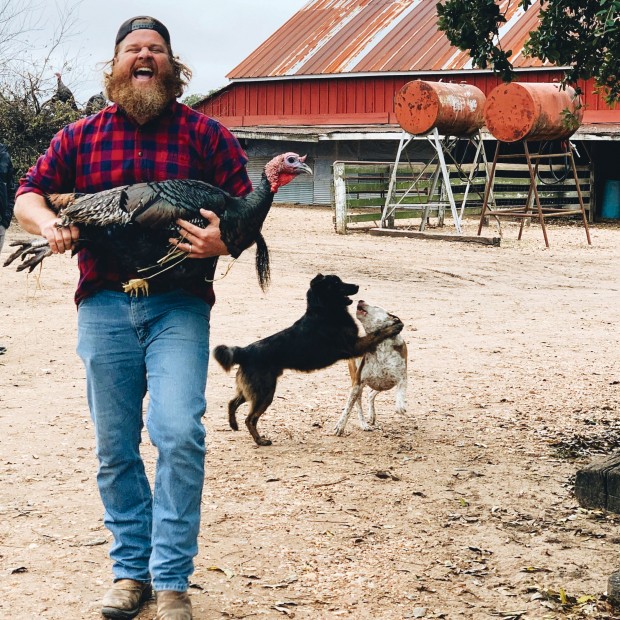 Excuse me if I just kinda tip-toe past any election mayhem, down to the road-less-traveled: Yonder Way Farm in Fayetteville, Texas. Here we find Jason and Lynsey Kramer, two former city folk growing grass-fed cows and free-range children. I mean, chicken. Well, chicken, children, pigs and some cows. Veggies too … but not to sell. The veggies and the children stay on the farm, along with, of all things, the turkeys.

I just thought, in my city-girl naiveté, that this former Heights-area Houston firefighter and his professional photographer wife would be raising turkeys like they do their free-roaming chicken, grass-fed cows, and pigs that root and roll and eat like, well, pigs. But Lynsey says today’s grocery store-type turkeys wouldn’t make it on a farm like this. “They are honestly very hard to raise outside on pasture as they have been modified to be raised predominantly indoors in houses.”

The turkeys the Kramers do have on their farm are wild. Jason initially intended to sell them to eat. But it seems that Rio Grande turkeys are subject to Texas game laws. They would be allowed to shoot only two a year. So, they’re pets, or as Jason calls them, “farm art” or “the worst idea I ever had, ha, nah.”

Once, a few Thanksgivings ago, Lynsey recalls that a “fancy weekend farmer” wanted a single pet turkey for farm ambiance. “They built a really nice pen. But they quickly realized their new turkey was lonely, so we had to catch another one (pictured here) for them to bring to their ranch,” Lynsey said. “Turkeys do not like to be alone.”

Unless a brooding female is looking for some privacy to nest. Like when the Fayetteville postmaster spotted one of the Kramers’ hens downtown.

“The town fell in love with her, so much that they started a little Facebook page about her. The townspeople would post what ‘Henrietta’ was up to for the day,” said Lynsey. “One resident shared she ate their cat’s food on their back porch. Another that she chased their dog.”

Turkeys do have their pecking orders, but they apparently aren’t anti-chicken snobs. One time, a mama turkey dutifully roosted the usual 21 days on her nest, with only one egg hatching. It turned out to be a single baby chicken. None of the turkey eggs hatched.

“It was the cutest thing seeing this full-grown turkey care for this baby chicken as if it were her own, but it clearly wasn’t,” said Lynsey.

That’s not the only cross-species nurturing that goes on. There’s the human-to-baby-pig kind, a job that typically falls to 13-year-old Laney Rae Kramer when a baby pig is hurt or rejected by the mother.

The Kramers seem to have missed the memo that the world is falling apart. Or maybe they just got it early, and got out ahead of things. Lynsey’s Instagram account, @fivechicksandafarmer, will tell you more about their daily life. The five chicks are Lynsey and four daughters, Kaylyn, 15, Laney Rae, 13, Ruthie, 11, and Exie Jo, 9.

Truth is, this country life began for the Kramers with a wake-up call in their early 20s. Kaylyn, their only child at the time, was 2. “The doctor told Jason he had the bloodwork of an 80-year-old man. I was told I would be a diabetic by the time I turned 30,” said Lynsey.

“We were eating the SAD (Standard American Diet), including plenty of fast food,” said Lynsey. After a lot of research and a new understanding of grocery store labeling, the Kramers decided they wanted to know the practices of the farms that supply their food. Their journey to much better vital signs led them to an entirely new life.

In 2006, Jason’s aunt and uncle invited them to live on their acreage in Brenham in exchange for help on the property. This turned into the Kramers’ practice farm. “We literally put the girls [by then they had two] to bed one night and watched Amish women plucking chicken, over and over on YouTube,” said Lynsey.

In 2011, the Kramers purchased 40 acres (minus the mule) and started what has come to be called Yonder Way Farm, and a whole new way of life. We don’t all have to be farmers to appreciate Jason’s favorite Mark Twain quote:  “Find a job you enjoy doing, and you will never have to work a day in your life.”

And by the way, they are having chicken and pork for Thanksgiving. They don’t eat turkey.