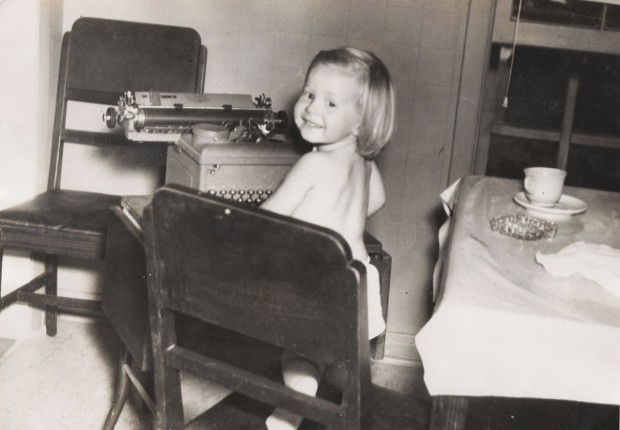 IN TRAINING Little Cindy Wright sits at her first typewriter, which looks a whole lot like one she would use 20 years later while working for Jack Cato.

I must have been about 4 years old, standing in the yard, holding my mother’s hand, watching my father start the car. It did not explode, so we got inside.

Dad was doing a series of undercover investigative stories on organized crime in Galveston, which prompted some surprise raids by the Texas Rangers on Galveston gambling joints in the age of the celebrated Balinese Room, resulting in threats on Dad’s life. I spent many “take-your-daughter-to-work” days in the late 1950s at our family-owned newspaper in Rosenberg, Texas, The Fort Bend Reporter, run by my parents, Sandra and Clymer Wright, who met on their college newspaper staff.

Some 20 years later, I would find myself being introduced on the air my first day on the job at an all-news radio station, KEYH. I headed out to my first assignment, a press conference at the Houston Press Club, then located at the top of 2016 Main.

In the middle of the press conference, much to my horror, I was paged to the phone. The deep-throated voice of David Fowler, my boss of fewer than two hours, went to the pit of my stomach. “Cindy, you just missed the police. They heard your name on the air and arrived with handcuffs out and a warrant for your arrest.”

I apparently was wanted for more than $4,000 worth of parking tickets. The previous year, I had “paid my dues” by working for almost nothing, for Houston News Service, dubbed “Jack Cato’s outfit.” Jack was a beloved police beat reporter many remember from KPRC-TV, Channel 2.

Jack had decided to take a break from TV and start his own local wire service with virtually no money. All he needed were some manual typewriters, used teletype equipment, a ratty office, and inexperienced “kids” like me, who would do anything to break into the news business.

Jack said parking was a non-issue because of his arrangement with the police department. It was understood that we could park at a meter, get a ticket and turn it into the trusty cigar box on Jack’s desk, and it would be “handled,” or, in my case, apparently not.

My boss directed me to stay put, that the police were combing downtown looking for me and would boot my car if they found it. After several hours of frantic phone calling, Jack finally surfaced and “resolved” my dilemma, thus saving my job.

Jack is one of many classic characters in Houston lore mentioned in a new e-book called Special Crimes: Memoirs of a D.A. Investigator, by Kenny Rodgers (not the singer). Rodgers spent nearly 20 years in the ’70s and ’80s finding evidence to aid prosecutors in some of Houston’s most notorious crime stories.

Back when Houston was a two-newspaper town, a community of reporters, prosecutors, defense attorneys, police investigators and judges formed a hub of pre-internet energy that became the stuff of books and movies. Competition was stiff to get the scoop or win the case, making fierce friends and competitors among everyone involved.

The stories that emerged in this atmosphere resulted in books like Blood and Money by Tommy Thompson and The Cop Who Wouldn’t Quit by Rick Nelson. My own experience as a reporter inside the courtroom involved Fort Worth multimillionaire T. Cullen Davis. Texas Justice by Gary Cartwright would recount the tale. This story, along with Blood and Money, helped solidify the reputation of Houston’s Richard “Racehorse” Haynes as an internationally celebrated defense attorney.

“Covering stories in Houston in the ’70s and ’80s was like being in the middle of a scene from the movie The Front Page,” said Tom Kennedy, who covered the courthouse for The Houston Post.

Kennedy helped his buddy, Rodgers, edit Special Crimes. “It’s as close to a biography on Johnny Holmes as you will ever read,” Kennedy said. Holmes, the handlebar-mustached district attorney from 1979 until 2001, appointed Rodgers as his chief investigator.

Holmes appointed the precise, detail-oriented Bert Graham as his first assistant, a position he would hold under every DA until Graham’s retirement in 2008. According to Rodgers, “He had the distinction of having won convictions in 54 consecutive contested felony cases.”

Rodgers devotes his first chapter, “The Black Widow,” to one of Bert’s more intriguing cases, along with a chilling follow-up on where Catherine Mehaffey Shelton is today. Gary Taylor, a journalist, authored Luggage by Kroger, which gives a jaw-dropping account of Taylor being shot while trying to flee the “black widow’s” apartment, also recounted on CBS’s 48 Hours.

Special Crimes (self-published, available on Amazon) is written like Kenny talks, with humor, colorful language and unfiltered frankness about a time in the Harris County criminal courthouse that was anything but boring.