Even though students have returned to campus under the Full-Density Campus Plan, school still doesn’t feel the same for senior Fareen Dhuka. There’s no Senior Country or Senior Tea, and even though traditions like walking across the Quad and Dress Like Kinkaid Day remain, Dhuka was still disappointed when the annual Homecoming Dance was canceled.

Despite constant efforts to keep the 2020-2021 school year as normal as possible, administrators had to cancel the dance due to COVID-19 concerns. The annual Kinkaid game, which took place Oct. 30, was also modified - instead of playing at Rice Stadium, Kinkaid hosting the game. No St. John’s students were allowed to attend in person.

“I had always looked forward to each year’s Homecoming theme and dressing up with my friends,” Dhuka said. “Not getting to do that for my last year was a little sad.”

Recognizing disappointment over the Homecoming Dance and the game, however, the school decided to invite seniors to campus for the first-ever Senior Kinkaid Night on Oct. 26, the intended day for the dance. 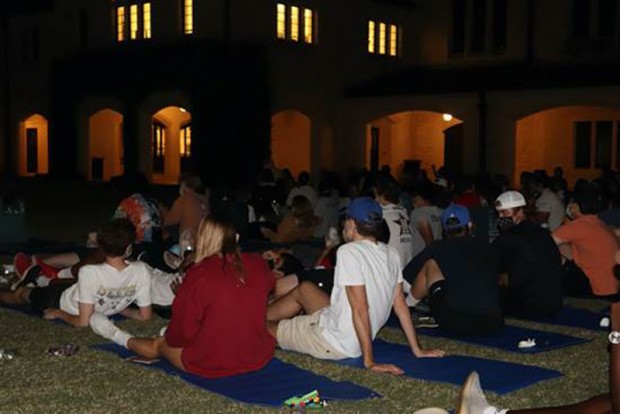 Seniors congregate on the Great Lawn to watch the annual Kinkaid Video made by Bailey Maierson, Meridian Monthy and Nina Varma. (Photo courtesy of Grace Randall)

On Senior Kinkaid Night, students ate Raising Cane’s on the Quad before congregating on the Great Lawn to watch the annual Kinkaid Video created by seniors Bailey Maierson, Nina Varma and Meridian Monthy. According to senior Jenny Green, the video, which featured football captains George Caldwell, Landon McKelvey, Eric Johnson and Jim Rouse, was well-edited, especially because it was filmed while socially-distanced.

“I really enjoyed getting to watch it with the rest of the seniors instead of at an assembly like we normally do,” Green said.

“They really put a lot of thought into organizing Senior Night, which I really appreciated,” Green said.

Because students were required to stand socially-distanced and the markers had to be sanitized after each use, signing the mural took nearly all evening. The mural will be displayed at future reunions and events for the Class of 2021 after graduation. 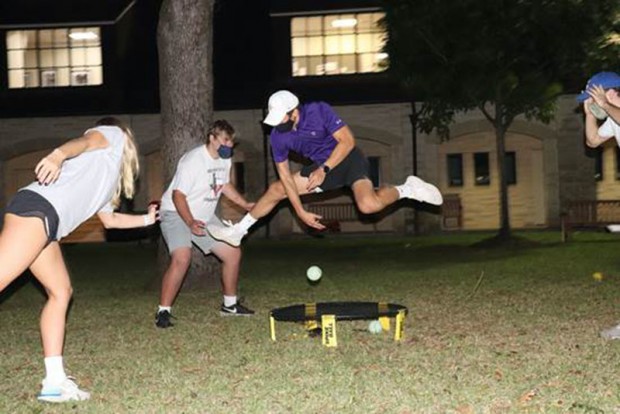 Thomas Chang jumps and scores a point during a game of Spikeball on the Senior Quad. (Photo courtesy of Grace Randall)

“It’s hard to imagine where we’ll all be 10 years from now,” Green said. “Signing it felt significant because I’m contributing to something that will still be there after those 10 years.”

The school also offered seniors another opportunity to celebrate Kinkaid Week. On Oct. 30 at 7 p.m., seniors were allowed to bring blankets or camping chairs and gather on Skip Lee Field to watch a livestream of the Kinkaid football game while eating Chick-Fil-A socially-distanced.

“Even though not having the Kinkaid game is not what anyone would have hoped for, I’m glad we were still be able to watch it together as a class,” Dhuka said.