Friends on the trail and for life 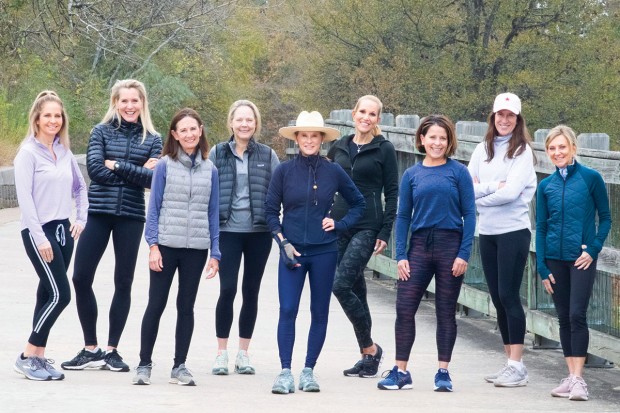 You might think you are about to read another story about a group of women who have been running together for several years. You are. But there’s so much more to this one.

The Chicas, as they call themselves, amount to 10 women: Maggie Brown, Karen Cecil, Anita Gaylor, Kate Gibson, Mindy Hildebrand, Marian Langston, Julie Moorhead, Paula Paine, Dena Prasher and Tana Wood. Between them, they’ve run 92 marathons (and countless half-marathons), in Houston, California, Canada, New York, Paris and points along the way. Running, though, was just the beginning for this tight group of friends.

“There was an original group, a few of us,” says Anita Gaylor, who owns Cottage288, a clothing boutique. “I met Mindy through The Fay School; our kids were 3 or 4. We were in carpool line, and she said, ‘Hey, do you want to run with my friends?’” It was 1998.

“We all loved training,” remembers Karen Cecil, an original Chica.

“So we just all started doing our runs together,” says Julie Moorhead, owner of Curated by Julie. “I want to say it was before cell phones, so we would have to be on the phone scheduling where we were going to meet.”

The group would meet daily in Memorial Park at 5 in the morning. “We would run home at 6:15 to get our kids ready,” Anita says. “We were known in the park as these chatterbox running moms.”

Dena Prasher, an account supervisor at Lewis and Partners Marketing, came to Houston in 2000 knowing no one. She met Julie through their children, who went to preschool at Pooh Corner. “One morning, she saw me running in the park,” Dena says. “She asked if I ran and told me her group met at 5 every morning. I thought, ‘5?’ But I showed up and started running with Julie’s friends. I had never run more than three miles, which I had done every day in Austin, but they always ran six. So the first morning I met them, in September, I doubled my miles, and then I started running 12 with them on Saturday mornings, and then in January I ran my first marathon.

“I instantly had this social structure,” Dena says. “Every morning at 5, we got an hour to talk without phones, without computers. And on Saturday mornings [when they would run 12 to 18 miles through River Oaks, Tanglewood, downtown], we had four hours. When do you talk to your friends for four hours?”

“Our running time became a sounding board,” Karen says. “It was a safe place to share concerns, honest opinions, sometimes spirited political debates (not often), kid issues and more. We have a saying, ‘What is said on the trail stays on the trail.’”

Julie adds, “I think we’ve solved all the world’s problems on the trail. We’ve raised our children on the trail. I think about how many times we’ve run around that track together. It might have taken three loops to solve a problem, but we did.”

From its first days, the group continued to grow. “Everyone would bring a person,” Anita says. “We’d all test them out, and if they stuck, they stuck. We ended up with this 10 who are really solid.”

Over the years, the running “war stories” multiplied. “I’m not sure what year it was,” Karen says, “but a tropical storm blew through during our first lap early one morning in the park. [There was] thunder, lightning, and as we rounded the corner, a couple of trees crashed down on the path. That was the fastest mile we ever ran, just trying to get back to our cars!”

Anita remembers marathons in Chicago, New York, Austin: “Karen and I ran Houston, and four weeks later was Austin, so we drove up, ran the marathon, ate at Threadgill’s, and drove home in time to help the kids with homework!” She remembers running from Aspen to Basalt with Mindy – “Mindy was training for Quebec, I was training for Chicago.” But her favorite was Paris. “One of us was celebrating their anniversary, and they were going to Paris. It happened to be during the Paris marathon, so nine of us went with them. The couple ran, but we ran it too!"

There were a few guest runners. “We had a few guys run with our group at times,” Julie says. “But inevitably we would forget we were running with someone who was not a girl, and the conversation would go into periods or something.”

And there were some mishaps along the way. “If you run as much as we all ran, you’re gonna fall,” Anita says. “I remember running in the park and all of a sudden, I look next to me, and Marian’s gone. It was always sort of, ‘Who’s gonna fall next?’” 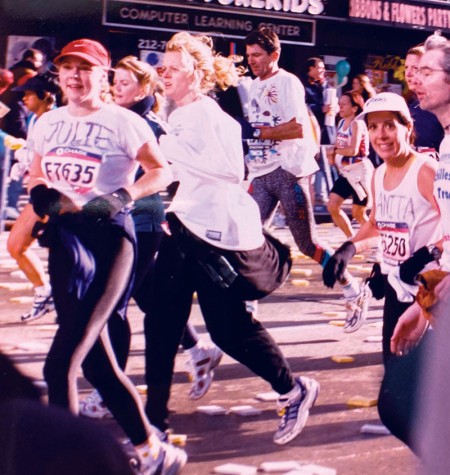 Original Chicas Julie Moorhead (left, in red cap) and Anita Gaylor (right, in white cap) have run many marathons together.

Anita also says they all came to know each other’s running personalities. “I get really hangry and mean. Julie gets really competitive and chatters, and she gets faster as she goes, and you just want to knock her down.”

“Julie would always tell me, ‘The best thing to do is run faster, so you’re not out there as long and you don’t get as tired,’” Dena says. “But I was like, ‘If I could run faster, I would!’”

“Karen is very ‘deep thoughts by Karen,’ for sure,” Dena agrees.

Dena says Mindy always looks pretty, “never sloppy and sweaty like the rest of us.”

“Paula uses the run as a precursor to her real workout,” Anita says.

“Maggie has to go all the way to the marker no matter what, meaning she has to get the full three instead of two-point-nine miles,” Dena says. “Even if we had just run an 18-mile run.

“We are the quirkiest group,” she adds. “We all laugh about each other. We’re all so different. But if you reach out to the Chicas – my mom is sick, I’m getting divorced, I need help with a birthday party for my new boyfriend, I need stitches this afternoon – someone will have an answer for you within 10 minutes. When something happens, we are better than the Marines.”

When Anita’s father died in 2006, the Chicas took over and got her house ready for 200 people following the funeral. “I just showed up, and they had it all done,” she says. “That was really special for me.”

When Karen was pregnant with her third baby, she experienced serious complications. In the midst of bed rest and transfusions, her son was turning 6. “My sweet friends organized and planned a birthday party for him, and they showed up to make sure it all went well. I did not even ask. But this is what they do when one of us is struggling or celebrating. They show up.” 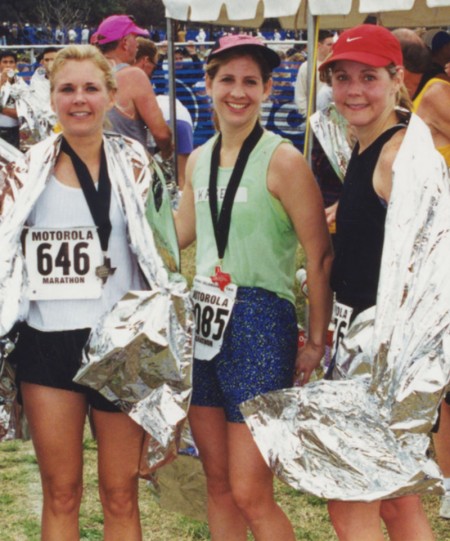 Between them, the Chicas have 24 children ranging in ages from high school to 30s. When each one graduated, the Chicas hosted a party to celebrate. Now, they are planning weddings together. Anita loaned her home for a Chica child’s engagement party, and her son Graham will be married in Julie’s home this month. Graham and his fiancée are buying a house; their realtor is a Chica’s daughter.

The Chicas still run, but not as often as before, and marathons, except for half-marathons, are pretty much over. Whoever is available gets together Wednesday mornings to run and walk, and weekends they’ll go on long bike rides together. Smaller groups of the Chicas meet to run and walk on other days during the week.

They get together for their annual Christmas breakfast. Only now they don’t need to worry about making it home in time to get kids off to school. And they celebrate birthdays with quarterly lunches or dinners.

Three of the Chicas have served on the Memorial Park Conservancy Board of Directors (Kate Gibson is still a board member), contributing to the park that staged some of their most cherished friendships.

“Now it’s that we support each other,” Anita says. “Julie’s daughter runs a nonprofit, so we all try to support it. And as the kids are getting older, they all feel like cousins. They know they can call one of us if they need something.

“We all have other close friends,” she says. “But at the end of the day, this is who you call. It’s pretty cool.”

“It’s really become our little community,” Julie says. “It’s a family. Just a beautiful friendship of women who were brought together by the love of running.”