Winter sports in a pandemic 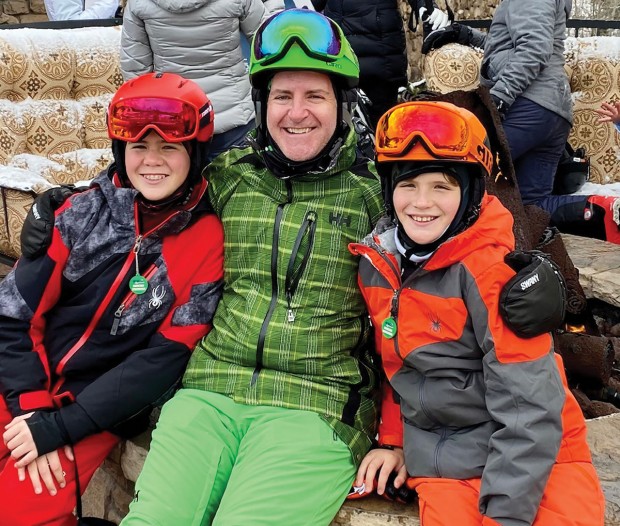 APRES SKI The Boyle Boys are all smiles after a blue-sky day on the mountain. From left: Kevin Jr., Kevin Sr., and Sean Boyle.

Given that some of the first Covid hotspots originated in ski resorts, some people are opting to take a pass on winter sports this season. But the ski industry has met the challenge head-on and implemented multiple measures that have allowed them to keep the slopes open. Indeed, it’s a sport that’s practiced in the open air and by definition must be distanced – so with a few precautions, according to experts, there’s no reason it can’t be practiced safely.

“If you look at different types of activities and the risk posed by the viral pandemic, I think being outdoors and especially covered with masks or other types of protective devices, it’s probably as safe an activity as you could do,” said Charles Katz, an ENT specialist formerly of Bellaire who moved to Salt Lake City, Utah, almost a decade ago.

Charles has been a part of the medical community responding to the Covid crisis that hit Park City in March, just as it did ski towns around the world. He observed closely as the numbers went down and then back up again, with Park City experiencing an intense second wave in December and January, at the time of our interview.

“There are certain risks associated with resorts; you’re not outdoors in a socially distant situation all the time,” said Charles. “You have to go out and have food breaks – those situations that may not be socially distanced.”

Still, travelers can take measures to reduce those risks — he recommends avoiding busy holiday weekends, preparing your own food, and choosing a condo or an Airbnb type of situation, rather than a crowded resort. A number of Buzz travelers have been venturing out to try out the terrain and are finding good conditions and reasonable risk levels, and enjoying their winter sports with a minimum of traffic on the slopes.

Guys on the slopes

Kevin Boyle, for instance, took a weekend getaway in Vail the first week in December with his buddy from Tanglewood, Mark Young. There they found the ski resort taking multiple precautions: mandating mask-wearing, spacing out the wait lines for the lifts, requiring reservations, and reducing seating capacity at the restaurants to allow for distancing.

“The mountain dining had very restricted access; they were taking reservations, and that just motivated us to throw granola bars in our pockets and eat on a picnic bench on top of the mountain and not bother trying to find a reservation,” he said. “The views were great.”

“It was great to see,” said Kevin. “The mountain was certainly doing its best to have new rules in place, to make sure the trails stayed open and that everyone was safe. There were not tons of trails open, but there were enough to keep us busy.”

He researched the safety of flying and found that while it’s not risk-free — tight seating may require sitting next to an asymptomatic carrier – he said the documented incidence of transmission from air travel has been rare. United Airlines, his chosen carrier, uses hospital-grade, high-efficiency air filters, as do most commercial airlines, which brings in half of the air from outside. The other half is pumped through the HEPA filters, which filter out 99.97 percent of airborne particles.

Kevin was gratified to see the airline staff enforcing the mask mandate when a 20-something woman refused to wear one. “The pilot got on and said if you don’t wear your mask right now, we’re going to kick non-mask wearers off the plane.” The woman put the mask on, and there were no further incidents.

So upon his return, he decided to reward his two boys — Kevin Jr., 12, and Sean, 11 — for a tough semester cooped up indoors with their online classes. He took them to Beaver Creek, Colo., where the family has now been going for three years in a row. There they had found an excellent adaptive ski instructor, Jenifer Behrens, who is trained in working with people with disabilities, and who used a special bluetooth device that connected with Kevin Jr.’s hearing aids, making it sound as though she were 18 inches away. “It was awesome,” said Kevin.

Kevin’s wife, Liz, who is not a fan of flying, decided to stay home with the three family dogs. So it was just the guys this time, and they spent the vacation bonding over breakfasts and dinners in the condo, with an abundance of adventures on the slopes – and for lunch, reservations were secured every morning at 7 a.m. for on-mountain dining.

Things were different this time; the instructor had to meet them at the bottom of the slope instead of at the lodge; she couldn’t hang out and have lunch with them, as she had in the past. Kevin had to stay present with the boys, and couldn’t leave them in her care.

They had a ski-in, ski-out condo, which helped tremendously with logistics – skiers without that advantage were booting up in their cars, since the lodge wasn’t offering that service.

But even with the restrictions, the trip was a wonderful father-son adventure. This was the third year in a row that the boys had gone skiing, and each year they’ve grown in strength and confidence. To Kevin, the trips have been an important way to give the boys something he wasn’t able to do when he was growing up, and it’s been a pleasure to watch them develop their skills, each in his own way.

“Their personalities are reflected in their skiing,” he said. “Kevin (Jr.) tends to be a little bit more hesitant and nervous, and Sean is the one who tends to go all in, so that’s reflective of their styles.”

To Kevin, the adventure is about much more than skiing; it’s about building self confidence. “Anytime you stretch your comfort level, and you’re able to successfully accomplish that goal, it’s just a great life lesson – and it’s something I continue to stress with the boys: It’s not about skiing, it’s about the lessons you learn from doing those activities, and this is one of them,” he said. “The boys were nervous that they hadn’t been on skis for a year. To overcome that discomfort and the nerves and work through it, and then excel, is a great life lesson – because how many times do we face that as adults? Falling down, then getting up and dusting yourself off and trying again. We’re all going to fall – and that’s ok. It’s how you respond that’s important.” 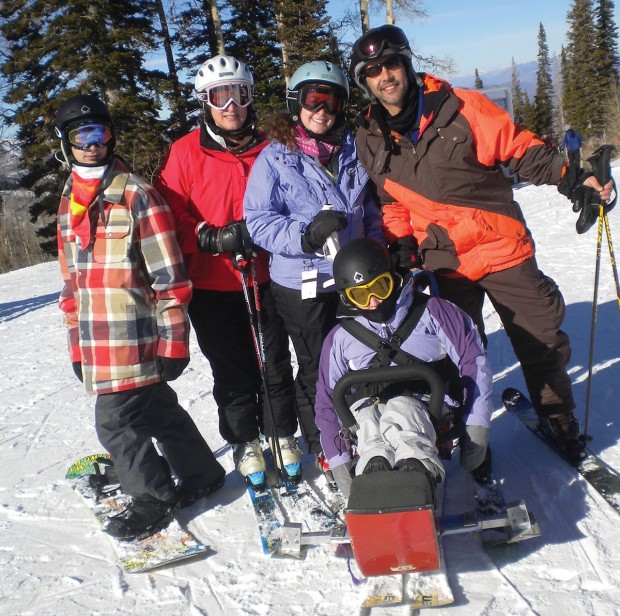 The Rosenbergs take a photo break at the top of the Bonanza lift at Park City Mountain. From left: Jonah, Cheryl, Samantha, and Richard, with Allison in the front in a sit-ski. (Photo courtesy Cheryl Rosenberg)

A home on the slopes

Bob Scott and Susan Bickley, friends and neighbors of Kevin, and Cheryl and Richard Rosenberg, friends and former neighbors of Charles, are two Buzz couples who have opted to go all in and get a second home in ski country – Bob and Susan in Beaver Creek, and the Rosenbergs in Deer Valley, Utah. Both couples are finding it to be a great alternate work environment – and also a good place to be during a pandemic.

Bob and Susan were in Vail at the time of the big outbreak in March, and it was a worrisome flight home. Still, they watched as the ski industry and the country in general began to get a handle on the virus, and by December, they felt they were ready to give it another try – taking all the precautions.

Normally they go and visit their families at Christmas and Thanksgiving, alternating between the families. But this year with the pandemic they thought it better not to potentially expose their mothers, so they packed their two dogs in the car and headed for the hills. 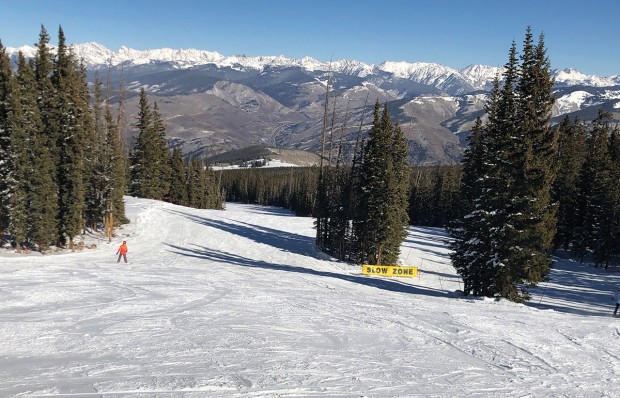 “I don’t think either one of us is anxious to fly at this point,” Bob said. “We’ve managed to make it to this point without contracting the coronavirus, and we’d like to keep it that way.”

Their work with the national law firm Blank Rome keeps them busy – especially Susan, who is the Houston office chair – but other than the spectacular view of the White River National Forest, and the ski breaks every now and then, their working conditions are pretty much the same.

What they’ve noticed in their occasional outings to town is that people in Vail and Beaver Creek are more cautious about using masks and distancing than they are in Houston – so they actually feel safer in their mountain home. When they were there over the summer, they were able to dine at a few of the local cafés, which had outdoor seating arrangements. Nowadays with the cold and the snow, everything is indoors, so they are enjoying creative cooking together – something they haven’t taken much time for in recent years, with the intensity of their work. 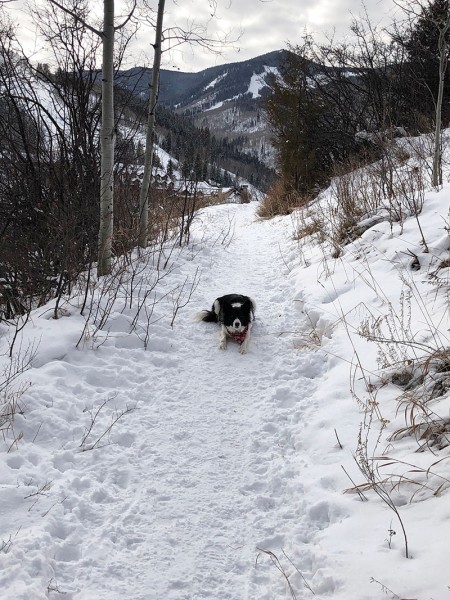 Bob and Susan's dog, Sasha, waits for her frisbee in the snow at Beaver Creek. (Photo: Bob Scott)

Cheryl and Richard are in the same boat, officing from their second home in Deer Valley. They have been pleased to find resorts and other local businesses taking ample precautions. Still, they don’t get out much, except to ski. “We didn’t go out to restaurants or go shopping; all we did was ski and go home,” she said. “You have to have reservations to eat at the restaurants on the mountain, which we didn’t do; we just brought our own sandwiches.

“My recommendation would be to come out when the snow is better,” said Dr. Katz in a December interview. “If they’ve been vaccinated that will make it safer for them and for everybody. Expect some changes, embrace them, and enjoy themselves. It’s still a fantastic opportunity to get outdoors and enjoy themselves and as low-risk an endeavor as you’ll find anywhere.”