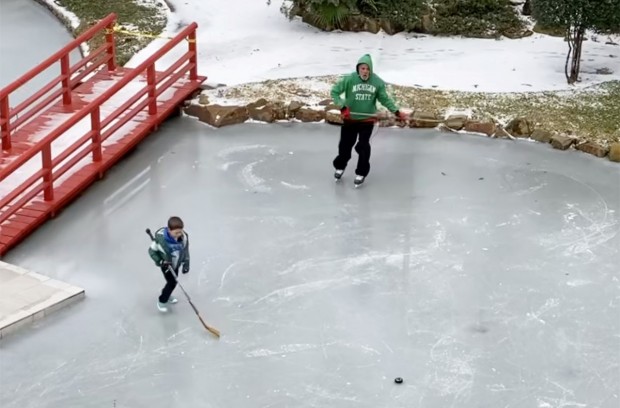 Ed Gavrila and his grandson Geno Pigati found an unusual silver lining during Houston’s freezing temperatures: a game of ice hockey on an outdoor, frozen pond.

In more than 40 years of playing ice hockey, Edward Gavrila never dreamed he would play on natural ice, outdoors in Houston. But that’s exactly what the 71-year-old grandfather did during the recent snow and ice event. He discovered that the koi pond in the Japanese garden at his residence at 5050 Woodway, near St. Martin’s Episcopal Church, was iced over. For a native of Michigan, this could only mean one thing: grab the ice skates and stick, and go play hockey.

Ed, owner of New York Bagel and Coffee Shop (aka “the Bagel Shop”), found a worthy opponent in his grandson, Geno Pigati. The first grader at River Oaks Elementary is a wiry and tenacious young man, according to Ed, and a good hockey player. “The ice was as smooth as a baby’s butt, and perfect for skating and playing hockey,” Ed said. Geno and Ed (“Poppy”) tested the ice to be sure it was strong enough to hold them. After banging on the frozen surface with their sticks and tip-toeing to double check, they started playing.

Geno represented the Dallas Stars and went up against Poppy, who stuck to his Michigan roots and represented the Detroit Red Wings. Geno didn’t have his own skates, so he hit the ice wearing Crocs, which worked amazingly well. After a competitive game, Geno beat Poppy. “It was a 7-6 overtime killer,” Ed said.

The pair has a history of playing hockey together. They have been to the ice rink at the Galleria, and they also spend time at Ed’s Galveston home playing street hockey with pucks made for concrete. For the last several decades, Ed has played in local men’s ice-hockey leagues to keep up his skills from the old days. “I played high school hockey. I tried to walk on at Michigan State, but didn’t make the cut so I played intramurals,” said Ed.

Spending time with his grandson was a bright spot before returning to the reality of a city filled with power outages and broken pipes. Fortunately, the Bagel Shop on Hillcroft did not lose power and was able to reopen safely to serve the community, while most everything else was closed. “It was very rewarding to be there for so many people,” he said. “We made the best of a tough situation.”

The frozen koi pond has now thawed and, surprisingly, almost all of the fish survived. Ed’s neighbor, Tirey B. Counts, managed to record video of the hockey game from his balcony a few floors up, and Ed proudly shared it with friends and family. “I got a lot of texts saying that I look pretty good for a 71-year-old ex-hockey player,” he said.

Watching Ed and Geno play ice hockey brought smiles to many people’s faces, but not everyone was happy about the game. Someone sent the video to the property manager who told the pair they couldn’t play ice hockey on the koi pond. “Don’t worry,” Ed replied. “After this game is over, I’ll never do it again.” Unless we have another once-in-a-lifetime ice storm, he is probably right.

Editor's note: We hope you all are safe after the storm. Find a list of resources here. See a list of volunteer opportunities to help neighbors here, photos of families enjoying the historic snowfall here and a video of skiing in West U.