The Slopes of West University 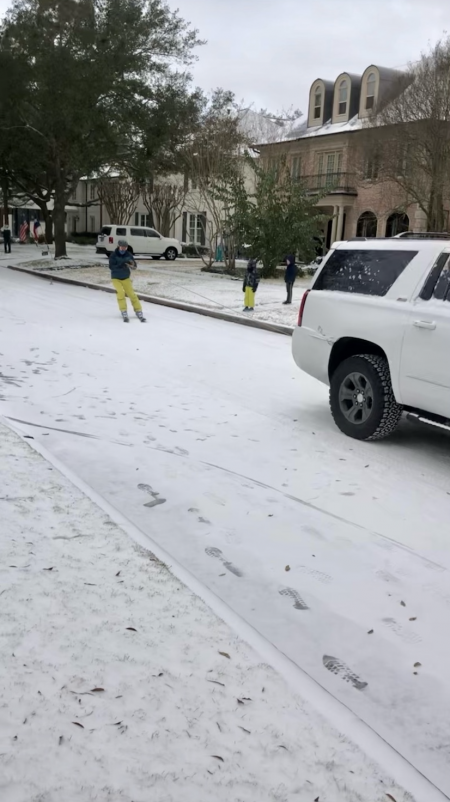 The Jackson family hit the slopes of West U on the morning of February 15.

A group of West University residents got a taste of Colorado in their own backyard. On President’s Day, Houstonians woke up to fresh snow that had fallen in their yards overnight. Prior to the disastrous power and water losses, the morning of rare snow on the ground brought more fun than worry to residents, including avid skiers Alex, Scott, and George Jackson.

The brothers (who were featured on the cover of The West U Buzz in November 2019), sparked an idea from the snow-covered empty streets. They pulled out their skis, gloves, and helmets to make an urban Texas-version of a snow day and attempt something they probably thought they would never do.

Scott’s wife Emily found some rope she had used for their twin boys’ pinatas at their birthday party, and they tied it to Alex’s toe hitch on his Suburban. They loaded up their kids and “hit the slopes” of West University.

Scott, Alex and George took turns being pulled behind Alex’s Suburban on their skis, stopping at stop signs, of course. Residents walked outside, excitedly taking videos. A puzzled dog named Archie even chased them as they skied by. They rode past the West U Fire Department where the firefighters cheered them on. “Only the Jacksons would find a way to ski in Houston,” laughed Emily.

Their kids Ford, Davis, Brooks, Hughes, and Leighton rode in the Suburban and enjoyed the view from the back window as they weaved up and down the streets.

Editor's note: We hope you all are safe after the storm. Find a list of resources here. See photos of families enjoying the historic snowfall here.