On Set With Amy Poehler 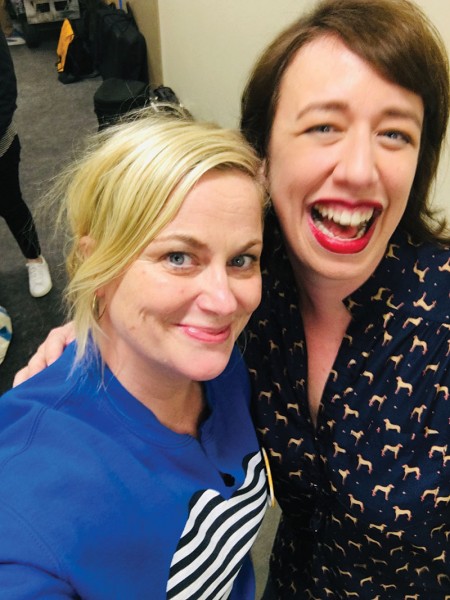 Two Octobers ago in Los Angeles, Jennifer Mathieu slipped into her most teacherly-looking outfit and called a cab. Waiting for her at a Long Beach high school movie set was actor and director Amy Poehler.

Poehler’s Paper Kite Productions company was part-way through making Mathieu’s fourth novel, Moxie, into a film for Netflix, and Poehler had given Mathieu a cameo.

When Mathieu arrived, she was whisked off to the wardrobe trailer. Stylists supplemented the Bellaire High School teacher and young-adult novelist’s blouse and denim skirt with a sweater. Then, she had her hair and makeup done.

“It was wonderful,” says Mathieu, who is known as Ms. Blessington by her students.. “It was a warm, fun, lovely working environment, and everyone was excited to be working on the project.”

Mathieu was thrilled when Poehler optioned Moxie in 2016. The film releases globally on Netflix on March 3. The movie and the book tell the story of 16-year-old Vivian Carter, who starts a feminist zine at her Texas high school to encourage change after feeling frustrated with how girls are being treated.

Mathieu took inspiration for the book from a Seventeen magazine article about the Riot Grrrl movement and her love for punk rock music. The film stars Hadley Robinson, from TV’s Utopia, as Vivian, and Patrick Schwarzenegger as Mitchell, the school’s handsome jock. Poehler plays Vivian’s mother.

Mathieu spent the day in a “video village” – where crew members observe filming on a large monitor – in headphones alongside the film’s screenwriter, Tamara Chestna. The two watched as Poehler directed two scenes. Mathieu’s cameo was the cherry on top.

She joined actors in the classroom to appear as a chemistry teacher – in real life, she’s an English teacher – and spent an hour filming the 30-second scene, which appears around 45 minutes into the movie. Mathieu stands in the background while Claudia, Vivian’s best friend, and another teen discuss the feminist zine, called Moxie, which is circulating the school.

Mathieu was struck by the number of lights and people on set and the energy and effort it takes to film a scene. “So much work goes into every second,” she says. “My respect for people who make movies grew even more. I came home and told my husband I’m never going to watch a movie in the same way again.”

Actors greeted her as “the writer” and thanked her for coming. Mathieu had lunch with Poehler at a picnic table and was happy to find the director was down-to-earth. “She was just so normal, easygoing, funny, and kind,” Mathieu says. “She asked me questions and talked about the books she likes.”

Mathieu is especially pleased with how scenes between Vivian and her mother turned out. In the book, the two argue, work through frustrations, and then bond. Mathieu sees aspects of herself as a teen in Vivian and parts of Vivian’s mother as her current self.

“I wrote it as a conversation between two generations of feminists, and I think that’s really captured in the film. It sends a wonderful message about female empowerment to girls out there. I can see moms and daughters watching the film together and enjoying it.”

Because of the pandemic, Mathieu won’t be able to celebrate the release with a big group of friends and family, but her neighbors offered to host a backyard screening. “I feel so fortunate that this movie even happened at all.”

Mathieu started writing young-adult fiction in 2007 after reading advanced-reader copies of YA novels from a teachers’ conference that convinced her she too could write a novel. During the pandemic, she finished writing her sixth book, Bad Girls Never Say Die, a YA novel set in Houston in the 1960s set to be published in the fall of 2021.

“I’ve been calling it my homage to The Outsiders,” she says, mentioning one of her favorite books. Her novel tells the story of what happens when a group of teenage girls from the “wrong side of the tracks” meets up with a group of girls from the “right side.” “The book is fast-paced and has lots of characters you hopefully fall in love with.”

To shape her story, Mathieu interviewed dozens of Houstonians about their memories from the 1960s, and she features Houston landmarks, including the former Playland Park, Loew’s State Theatre, and the Jive Hive record store.

“It’s a love letter to Houston, for sure,” says Mathieu, who grew up in the Washington, D.C. area, but calls Texas home. “I researched the book probably more than I needed to because I’m fascinated with Houston history. Houston is my adopted home town, and it’s been a wonderful place for me to live for the last 20 years.”