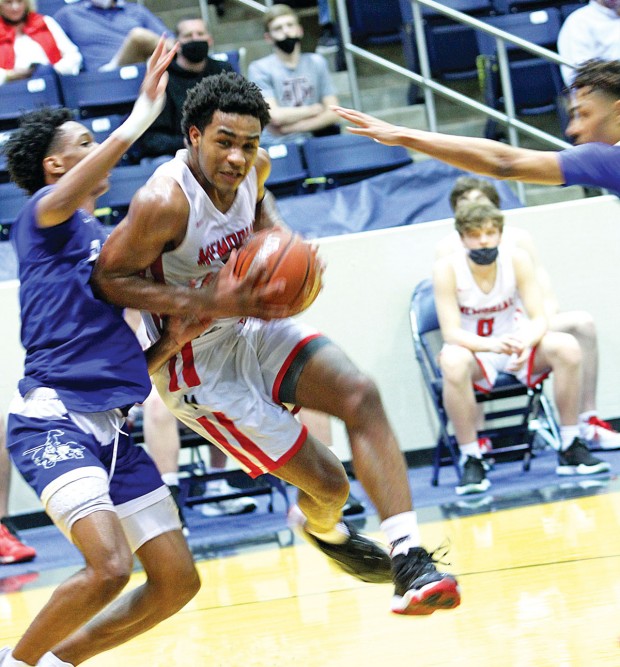 HISTORIC SEASON Memorial Mustangs senior Gaston Elie helped lead his team to its first playoff victory in 19 years. Elie was the Mustangs’ top scorer this past season with an average of 22 points a game.

With a 62-51 victory over Westbury, the Memorial Mustangs boys basketball team secured its first playoff victory in 19 years.

“Last year we reached our goal of winning the district championship, but this year we set our sights on getting that playoff win,” said Mustangs head coach Nathan Lay. “It was a group of young men that worked so hard, even through Covid-19, to reach for that moment.”

“Michael led us with incredible effort, while Glenn gave us great defense and an added scoring punch. Ben also gave us scoring and an inside presence, while Carson was kind of our glue on the court, and Jack was our energizer bunny as well as a 5-foot-9 rebounding machine. In addition, sophomores Sean Rodriguez and Matthew Janacek were big contributors.” 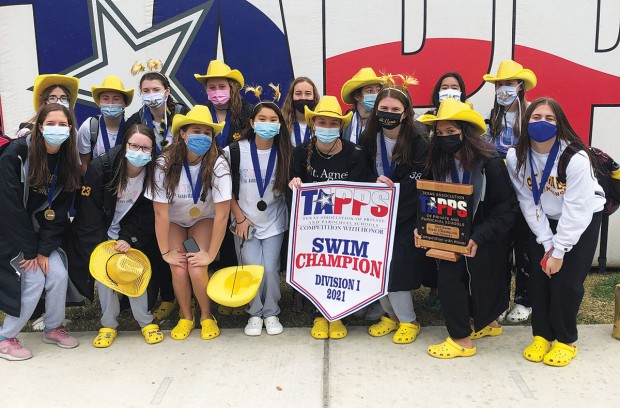 Among those contributing major points was senior Pearson Kurka, who, along with her third-place finish in the 200-yard freestyle, was part of two second-place finishes for the Tigers in the medley and 200-yard freestyle relays. “Pearson is our team captain, who was a big part of state-champion teams all four years on varsity. We are going to hate to lose her, but what a great way to finish it out,” said Kelley.

The Tigers were also bolstered by a big first-place finish in the 100-yard breaststroke by sophomore Sarah McCarty, while freshman Amelia Nelson and junior Elizabeth McGee scored valuable points for the Tigers. “Amelia was third in the 200-yard IM and second in the 100-yard breaststroke. She’s going to be an integral part of our team for the next four years,” said Kelley. Meanwhile, McGee finished second in the 50-yard freestyle and third in the 100-yard freestyle. “Elizabeth is our fastest swimmer. She is a great closer on our relay teams, or she can chase people down.” 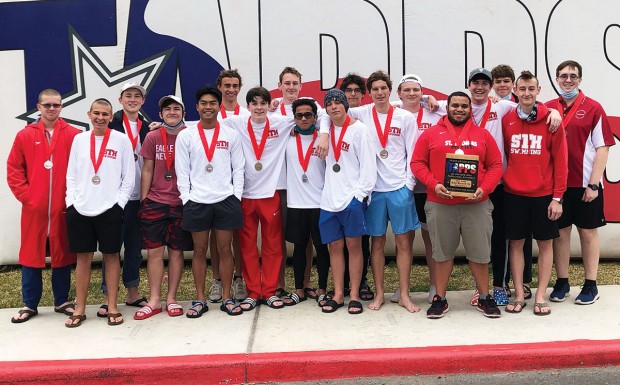 GREAT AT STATE The St. Thomas Eagles finished in second place at the TAPPS Division 1 state swim meet. The Eagles came within an 11-point margin of winning their second state championship over the last four years.

The St. Thomas Eagles came ever so close to winning their second TAPPS Division 1 state championship in the last four years while finishing second by a mere 11-point margin at the state meet. As it is, the Eagles can still lay claim to two state championships and two state runner-up finishes over what has been a phenomenal four seasons for its senior class of swimmers.

“Our seniors were part of the winningest class in our swim program’s history,” said Eagles swim coach VanArthur Jones. “This season our kids swam above and beyond expectations at the state meet. Every one of the guys swam well, which is hard to do. The proof is in the times, and I couldn’t be any prouder.”

For the Eagles, Dylan Michaels broke a school record while finishing second in the 200-yard butterfly. He also won the gold medal in the 500-yard freestyle and teamed up with Josh McLean, Alexsei Silvestre, and Patrick Pham for first place in the 200-yard medley relay. The foursome of Michaels, McLean, Tyler Sandrock, and Carrick Brogan finished third in the 400-yard freestyle relay. Individually, McLean set a school record while capturing the bronze medal in the 200-yard IM, Brogan placed sixth in the 50-yard freestyle, Sandrock came in sixth in the 100-yard butterfly, and Pham was seventh in both the 100-yard fly and 100-yard backstroke.

With her third-place finish at the UIL Region 4 swimming and diving championships, Bellaire Cardinals senior Avery Cooney broke a school record in the 100-yard backstroke that stood for 38 years. Cooney’s time of 1:02.5 broke the record held since 1983 by Bellaire’s Kelly Johnston.

“It was a goal of mine since even before my freshman season to break the school record,” said Cooney. “I could tell from the start that it was going to be one of my best races. It’s a memorable way to close out my senior season.”