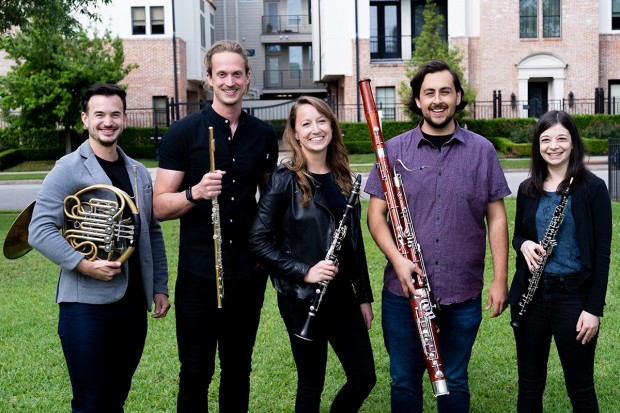 This week’s Name That Tune is brought to you by Douglas DeVries, a freelance musician who's one of the founding members of the Monarch Chamber Players. The Monarch Chamber Players is a group of Houstonian musicians who are committed to keeping classical music alive throughout the coronavirus pandemic. Read on for excerpts from our interview with Douglas. Watch the Players' video to see if you can Name That Tune.

How did you get started in music?
I grew up playing piano. My gramma was actually my first piano teacher. Then I started playing flute in high school, which is my primary instrument now. And then I did my undergrad at Juilliard. And after I was finished there, I came to Houston for my Masters at Rice University, which is where I met everyone I now play with in Monarch. So our Monarch Chamber is a woodwind quintet – flute, oboe, clarinet, bassoon, and French horn. And the core leadership at this point is the flute and our clarinet player, Rebecca Tobin, who founded the group, and our oboe player, Katie Hart. We all three went to grad school together at Rice. Our horn player is Russell Rybicki. And our bassoonist is Jordan Brokken.

How did the Monarch Chamber Players come about?
At the beginning of the pandemic, all of us found ourselves back in Houston. Before the pandemic, we were all working for different symphonies and freelancing all over the country. We've been out of school for years now and working as professional musicians. Then suddenly, we had no work and all had the same idea at the same time. Our first goal was to get enough concerts to perform for two weeks. We started emailing all around the city to different venues, and it took off. We offered if someone had a lawn, patio, or deck, we would play there. We have played everywhere – parking lots, pools, roofs even. The response was overwhelming. We started on Halloween weekend of last year and played nearly 60 concerts before the end of the year. Especially towards the end of the year, we were playing anywhere from 1 to 4 concerts a day. It was remarkable.

How does your ensemble work together?
The roles became clear immediately. Rebecca, as the founder, has taken on the biggest workload in terms of organizing and getting in touch with venues. Some of us are better with the online stuff. I take care of the audio/visual side of things – recording for YouTube and the website. We have been doing this for six months now, and we still feel new despite the amount of performances we have had. We have been overwhelmed by the need for music in the community. We all grew up listening to music and going to concerts. I remember very clearly the feeling of going to a concert and that’s been taken away from all of us over the past year. We have happened upon this space where people are eager to hear music. Any community space is basically gone. And people are craving community and music. We were happy to step into that place. Even after the pandemic, we plan to continue with the Monarch Chamber Players and bring music the Houston neighborhoods. We've found a unique niche that we fit into perfectly and we'd like to continue together as a group.

Editor's note: To attend an upcoming Monarch Chamber Players' concert, view their concert dates or book a show with them.