As the Churches Turn

A tale of coming full circle 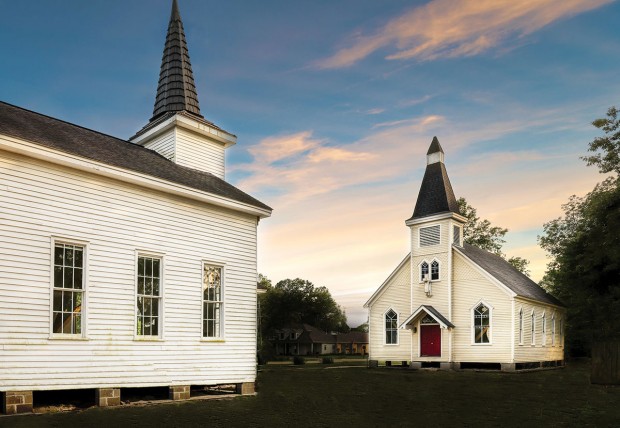 My head is still spinning, my heart still aching over what brought these two churches face to face. They have shared the same block for over a century, facing different streets. I’m still trying to get my head wrapped around the turning of events that brought them together.

It all pivots around Harry Gabriel, my marathon-running, Swiss Alp-skiing, scuba diving, former brother-in-law. By the way, artist, landscaper, and philanthropist further apply. Harry lived large, from the quaint but thriving outpost of his birth, Ponchatoula, Louisiana, a town of swamps, fish camps, Spanish moss, gators, strawberry farms, and Cajun cooking, just a skip across Lake Pontchartrain from New Orleans.

About 18 years ago, just when you thought Harry’s bachelor life couldn’t get any better, this handsome, fit, healthy-living world traveler was diagnosed with acute leukemia. He was only 44.  Acute, as in, get thyself to Houston a-sap, where your brother lives, to MD Anderson. Harry would endure two bone-marrow transplants, one in 2005, then again in 2011. As Harry put it, “Staying alive has become my full-time job.”

But that wasn’t entirely true. In 2019, before we all went into hiding, an old circa-1901 Lutheran church (minus the Lutherans) went up for sale. Harry told his Houston brother, John, an architect, that he bought the church, a few blocks from their childhood home, with the idea of turning it into some kind of arts center.

That triggered John’s memory of his LSU architectural thesis, which involved that very property 45 years ago.

In the same block is also an even older circa-1879 Presbyterian Church sitting empty, though filled with the memories of about 60 Presbyterians still meeting in a newer church next door. John observed that it and the 1901 Lutheran church shared similar design and dimensions, including steeples sitting close to their entrances pointing skyward.

John’s thesis project showed the two churches with “Twin Steeples” meeting face to face, joined by a courtyard. Both churches would need to be hydraulically lifted and turned to make this happen. Since Harry owned the Lutheran church, his only challenge was to persuade the Presbyterians to turn over their beloved church to be literally lifted and turned away from them, to face its Lutheran neighbor, where together they would be turned into a secular arts center with no strings attached.

Interestingly, Aaron Gordon, the young new minister, was mulling a similar scenario. As a musician himself, Aaron appreciated the acoustics of the old wooden church. In 2019, he was already inviting local musicians in to play in some informal gatherings. They were just getting traction when the pandemic hit.

“My philosophy is that churches need to get out of the ‘come in here and see us’ mindset,” he said. Aaron’s idea was to look around and see the good stuff already happening and get behind it. Aaron wasn’t always a minister. He had a previous career as a general contractor. Once he saw the set of detailed architectural drawings from John’s thesis, already done, Aaron realized that he had the skills to manage this project.

On the artist side was Kim Zabbia, former Ponchatoula High School art teacher, entrepreneur, and a noteworthy artist in her own right. Another bonus, Kim happens to be the wife of Robert Zabbia, mayor of Ponchatoula. Kim agreed to use her considerable connections to head up fundraising, with Harry’s promise to match every dollar raised.

Harry, a stickler for detail, spent 2020 in total seclusion, creating a 501(c)(3), articles of incorporation, and a mission statement, identifying the board, and assigning specific functions to each board member. It was to be called Twin Steeples Creative Arts Center. Kim agreed to chair the board. Word traveled quickly throughout the town, prompting a surprising number of  donations for just an idea on paper.

Kim had one final request to keep the momentum going. “I told Harry the churches need to be turned to face each other. You can only raise so much money on a good idea. They need to see it’s actually happening.” Harry got on it. The date was set for Thursday, Jan. 21, 2021.

Meanwhile, Harry noticed he had recently been losing weight. He figured it had to do with his obsessive work, sometimes until 4 a.m., on Twin Steeples. Still, he knew his body, so he scheduled a quick run to MD Anderson, telling everybody he’d be “right back.”

Then came the stunning news that the cancer was back. On Jan. 21, 2021, Harry watched via FaceTime from his hospital bed as the churches were hoisted into the air and swiveled around to face each other. On March 18, 2021, Harry took his last breath with his brother John at his side. Like Moses unable to enter the Promised Land, this story is just getting started.

Screen on the Green

10:00 am to 5:00 pm
Location:
Museum of Fine Arts Houston
END_OF_DOCUMENT_TOKEN_TO_BE_REPLACED