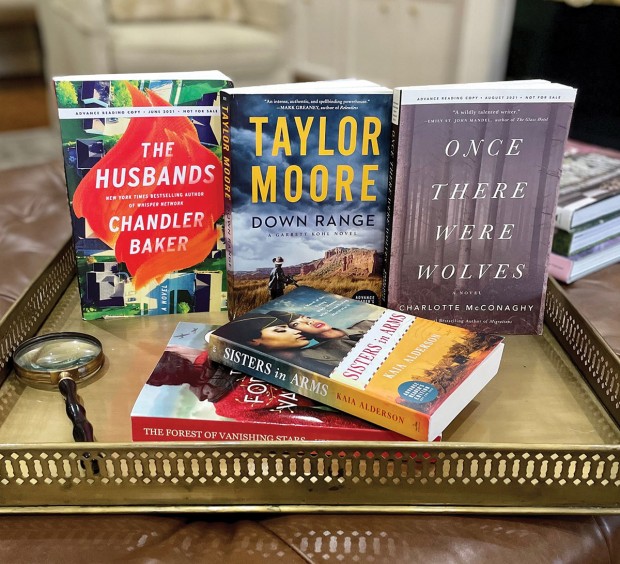 WHAT TO READ This month's picks include two historical fiction titles, a mystery set in Texas, a novel about restoring wolves to Scotland, and a Stepford Wives-styled book with a gender swap and a Texas connection.

Down Range by Taylor Moore – With Down Range, Moore, a sixth-generation Texan (he grew up outside of Houston) and former CIA intelligence officer, launches a new mystery series starring DEA agent Garrett Kohl that is set in the Texas High Plains and is filled with adventure, thrills, and a clever plot. Following a mission in Afghanistan that takes an unexpected turn, Garrett finds himself back in his hometown with a young boy named Asadi Saleem in his protective custody. Garrett’s strained relationship with his father, one of the most memorable characters in the book, and his brother and brother’s family is a focus of the story, and his brother’s missteps drag Garrett into a dark and dangerous illegal ring that threatens to destroy the entire Kohl family. Moore brings Texas to life as only a native can, and his ability to transport the reader to the High Plains of Texas is a high point of this fast-paced and high-octane mystery.

The Forest of Vanishing Stars by Kristin Harmel – Kristin Harmel tackles another untold World War II story in her latest historical fiction book, The Forest of Vanishing Stars. Kidnapped and raised in the eastern European wilds, a young girl is left abandoned after her captor dies in 1941. When she stumbles across a group of Jewish refugees running from the Nazis, she is astounded and dismayed to learn about their plight. Relying on her familiarity with the surrounding wilderness to help the fleeing individuals, she teaches them how to survive outdoors until a stunning betrayal upends her life.

The Husbands by Chandler Baker – Austinite Chandler Baker’s outstanding and thought-provoking sophomore novel calls to mind The Stepford Wives but with a gender reversal. Nora Spangler is an attorney, wife, and mom who struggles to find the right balance, particularly at home. While both she and her husband work, Nora is the one who runs carpool, makes doctors’ appointments and lunches, races to her child’s school when there is an issue, and keeps the house running smoothly. When they begin house hunting, they stumble across Dynasty Ranch, a neighborhood where the husbands are so helpful and supportive; however, as Nora and Hayden spend more time at Dynasty Ranch, they begin to realize that something is amiss. The Husbands tackles an issue that has been brewing for years, but the book feels particularly relevant in light of the pandemic and the resulting conversation around who was most impacted in the home.

Once There Were Wolves by Charlotte McConaghy –  Inti Flynn and a team of biologists arrive in Scotland to help reintroduce wolves into the Highlands through a program similar to the way wolves were returned to Yellowstone National Park. While participating in this venture, Inti also hopes to help her twin sister Aggie recover from a traumatic event in her past. Facing resistance from the locals, Inti struggles to reassure them that the wolves won’t harm them as long as they are left alone but instead will assist with balancing the ecosystem by slowing down climate change and environmental degradation. McConaghy’s writing is lyrical, and her descriptions of both the wolves and the wild Scottish landscape cause them to leap off the page. Once There Were Wolves is a beautiful and haunting story that will remain with me for a very long time and will be in my top 10 reads of the year. It is truly not to be missed.

Sisters in Arms by Kaia Alderson – Debut author Kaia Alderson’s book is inspired by the true story of the women of the 6888th Central Postal Directory Battalion (the Six Triple Eight), the only all-Black battalion of the Women’s Army Corp during World War II. Tasked with crossing the Atlantic to ensure U.S. servicemen received word from their families during the war, these brave women not only dealt with the regular dangers of war, but they also had to contend with racial injustice and those who wanted them to fail. Sisters in Arms is a wonderful book about courageous women whose stories deserve to be told.