The you in the beautiful view 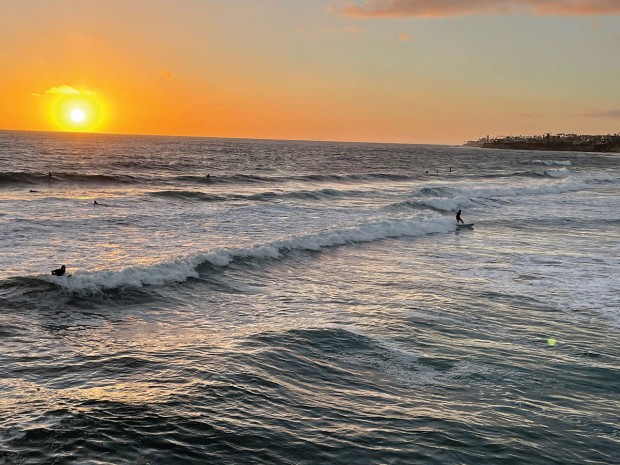 LIVING FROM YOUR CORE Writer Cindy Gabriel looks for a little rhyme and reason in this post-pandemic season. (Photo: Cindy Gabriel)

Like many of you, Stan-the-Man and I decided to fasten our seatbelts and head out for a different view, and perhaps perspective, from a little cottage on a pier overlooking a popular surfing spot in San Diego. It’s a standing reservation we keep every summer, with the exception of 2020. This time, I seemed to be picking up on things with different eyes and ears than before.

For every two surfers you see catching a wave, there are some 20 sitting on their boards, facing the horizon, waiting for their opportunity. Actually, it looks pretty pleasant, bobbing with the ocean, sensing its rhythm, watching for their moment in the sun.

Surfing involves mostly sitting and waiting. But man, that ride. Talk about summoning every muscle in your body to attention, to match the force that’s coming at you, planting your feet on a moving target, finding balance while hanging on, then rising like a god. Talk about living from your core.

Surfing is not on my bucket list for this life, but living from my core is. It’s taken me a lifetime to recognize the ways I have allowed life to pull me along with its currents when I was wanting to rise above them. I guess life is an art never meant to be fully mastered.

In one way or another, we are always between waves, a nice place too. It’s where we find the pulling and the longing. It’s in the ocean’s roar. It says there’s so much more. It’s in the siren sounds of seagulls as they hover near the shore. There’s a silence in these sounds that seems to hint of a shared mystery between the sea and you and me.

I thought I heard the sea and land whispering secrets of how this earth began, when water first met land. Surprisingly, it seems the land and sea did not always agree to this merger called the beach, back when it all began.

An awkward push, “move over please,” as land appeared between the seas. You might say, this land, these seas, were all elbows and knees.

“What is this shelf?” The water asked, feeling quite confined, a feeling that would be refined. It took a little time. It needed a little overlap, upon the land it gave a slap.

“Ouch! What kind of greeting is that?” The land didn’t care for this arrangement. “I recommend estrangement!” But the water continued to lap, and lap and then, to tap, tap, tap.

In time this dry and rocky edge softened into sand; and then the birth began, of all that we can see, the rivers, the trees, the chimpanzees, and even you and me.

After I wrote this, Stan-the-Man and I decided to experience the sea for ourselves by going kayaking in nearby La Jolla. As we were bobbing over the waves, the tour guide pointed to a cliff called Mt. Soledad, to a house among the mansions where Theodor Seuss Geisel lived until he died in 1991. He was known as Dr. Seuss, the Cat in the Hat Dr. Seuss, the Seuss of Green Eggs and Ham. He wrote 40 books or more from his magnificent view.

This may just be local neighborhood lore, but the tour guide told a story I can’t verify, about a stand-off the author got into with a neighbor at the top of the hill who objected to a pool he built. He said the spat inspired the Grinch who stole Christmas, the Grinch with a heart three sizes too small.

I’m wondering if the lapping of the waves somehow got his attention, and helped him keep his zany timing, rhyming rhythm.

Before there was a famous Seuss, there was a shy and awkward boy named Theodor Seuss Geisel, born way back in 1904. I read he was bullied as a child, sometimes just for being Jewish.

Sometimes, it seems his words were perhaps his way to answer back. Words like “a person’s a person no matter how small.” And “nothing is you-er than you.” Books like Thidwick the Big-Hearted Moose and Horton Hears a Who.

I understand that some of his books have come under review and don’t fall so nicely on the eyes and ears today. This is nothing to take too lightly, for sure. But let’s keep the Seuss who said, “Unless someone like you cares a whole awful lot, Nothing is going to get better. It’s not.”

I hope you’ve spent some time this summer enjoying a beautiful view. I hope you’re revived and strengthened in the core of who you are. The beauty in the view is the same beauty in you.