Since the fall of Saigon 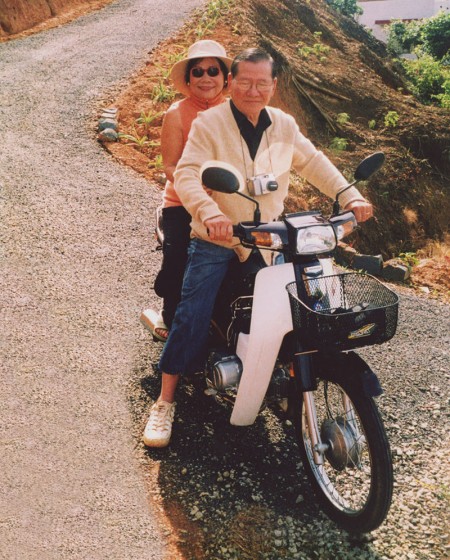 GIVING BACK John and Rose Nguyen, enjoying Rose’s hometown of Dalat, Vietnam, in the 1990s. The Houstonians shared their good fortune – John paved a muddy road, and Rose delivered babies in homes.

Looking back on the 20th anniversary of September 11, I remember those first few weeks of shock. We were all feeling vulnerable, waiting for the next shoe to drop.

I kept a standing haircut appointment with Katherine Le. For her, September 11th triggered a gut reminder of being 10 years old, when she and her family abruptly fled their comfortable Saigon home, as American troops, with little notice, pulled out of the war, and North Vietnam declared victory.

On September 11, 2001, Katherine and husband Nam’s own son had reached that same age of 10. “The second I saw that plane hit, I thought of one word, war.” Katherine didn’t hesitate. She was the first of many parents to pick up Edward and his little sister Audrey, 8, from Poe Elementary. “My only thought was, where would we go?”

America had always been the place they would go. The Vietnam War had raged the entire decade of her young life, but it had not reached her Saigon home, until it did, April 30, 1975.

Katherine’s family had more American connections than most. Her father, Major John Nguyen, was an accountant for the South Vietnamese army. His good friend, James Hyink of Iowa, an accountant in the U.S. Army, told him of the pull-out to come. Fleeing wasn’t new to her father. He grew up in an affluent family in northern Vietnam where he became fluent in French and English. In 1954, he fled south as Communist-backed troops seized control of the north and Vietnam became two separate states.

In South Vietnam, John married a sharp, ambitious nurse named Rose and had 12 – yes, 12 – children. Katherine was No. 8 of four girls and eight boys. Three housekeepers and a driver were employed to help manage the brood. The family wealth was largely built by mother Rose, a nurse-turned-entrepreneur. She owned and ran a series of successful restaurants in Saigon.

Suddenly in late April of 1975, Katherine’s life became a frantic blur as plans were made to leave this life forever. But she had to laugh about what they wore. “We looked pretty conspicuous. My mom dressed us all the same. The girls wore solid white cotton dresses. The boys wore khaki shorts with white Hawaiian-cut shirts. We each had our own Smurf backpacks,” she chuckled. “We just didn’t have the wardrobe for fleeing a war.” In those backpacks were a first-aid kit, identification, and a little money in case they were separated.

On the day of the rescue, Katherine remembers being in a boat with her parents, siblings, and one 17-year-old friend of her brother who asked to come along. There were more people heading for that large Navy vessel than it could hold. People were frantically climbing aboard, until a U.S. Navy officer took control with a bullhorn.

He made the gut-wrenching call that only women and children would be allowed to board further. But then, came another question. “Can anybody speak English?” Katherine’s father, John, raised his hand.

John served as interpreter in exchange for his whole family being allowed onto the ship. So, up climbed the Smurf backpack parade. John then told the 17-year-old friend to hold onto his ankle as they climbed onto the vessel. Once on the ship, John said to the U.S. officers, “This is my son.”

The family eventually arrived in the tiny town of Villisca, Iowa, James Hyink’s hometown. James’ father, Walter Hyink, a bank owner, agreed to sponsor the Nguyens. John went to work immediately as an accountant for his small-town bank.

By the late ’70s, Rose identified Houston as a city with a large Vietnamese community and a good business environment. The family settled here and bought a neighborhood corner store, called Henderson, on Henderson and Kane in Houston’s historic Sixth Ward, where all the children worked and helped pay for their education.

Once Vietnam opened up to travelers in the ’90s, John and Rose made many trips back, always looking for ways to “give back” their good fortune. In Rose’s home city of Dalat, a steep, dirt, mostly bike and pedestrian road to a village elementary school became impossible to climb after a rain. John decided to pave it on his own. Rose caught up with young adults who said, “You delivered me.” As a nurse, she delivered babies in homes of people who couldn’t afford a hospital.

As for that young man who held onto John’s leg back in 1975 on that climb into the naval ship, an American family in California sponsored him to move there, go to college, and build a life.

In August, Katherine helped organize a big family celebration to honor Rose’s 90th birthday. Katherine's father was 81 when he passed away in 2010. But his words to “give back” still live in his children:

Whether you are generous or greedy, it multiplies. Don’t be easily impressed or easily offended. Education saved my life, but common sense doesn’t come in a book. Peace is knowing you have enough.