But I thought you liked that 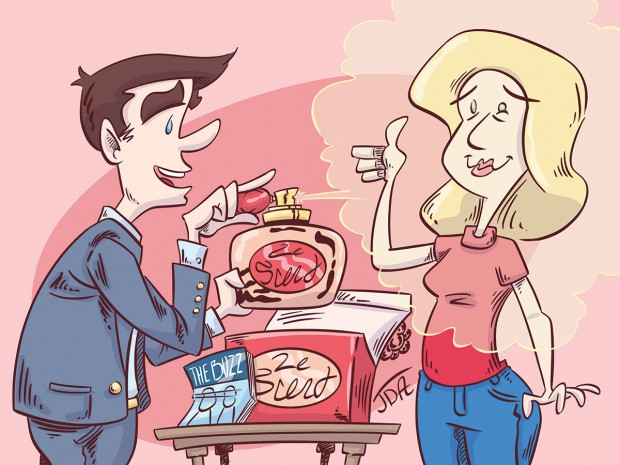 SMELL A WHITE LIE Should you be polite or honest with your loved ones? It depends – do you want your spouse to think you actually like that perfume? Our spouses and family members are the ones who know us best. Usually. (Illustration: behance.net/runamokstudios)

So you think you know your people? We did, too. For ever and ever, my family – mom, dad, sister, me – knew that my sister was strange because she didn’t like raspberries. The rest of us loved raspberries. Or so we thought.

Summer vacations always had us raspberry hunting: beautiful trays of them in Seattle’s Pike Place Market, fragrant framboises in France. We would swoon, and then we would tease my sister … because she didn’t like raspberries. How weird.

Then, maybe two years ago, someone unearthed the truth: My father has never liked raspberries. What? My sister’s disdain for raspberries was part of our family story. Suddenly nothing made sense. Except to my sister, who felt rightfully vindicated from years of raspberry abuse.

Buzz editor Joni Hoffman tells a similar story. She’s been married to her husband Michael for 33 years this month. But it was just this summer that Michael realized Joni doesn’t like iced tea.

“How could he not know, I’ve never ordered iced tea in my life,” Joni wonders. “We were walking one night, and Michael was talking about something he read about things people hate that everyone else loves. I said, ‘You know mine,’ and he said, ‘No, not really.’ So I said iced tea, and he said, ‘What are you talking about?’ I never order one, but he never noticed. He never knew.”

Lana Rigsby, founder of the design firm Rigsby Hull, thought she was helping an elderly uncle – until he died and she found out the truth. “When my darling great-uncle Earl was in his last year, it tortured my grandmother that his appetite for her home cooking had waned,” Lana says.

“I brought him a jar of La Madeleine tomato bisque one day, and he suddenly brightened, ate it all, and insisted that he could live happily on that soup alone for the rest of his life. For months I drove two and a half hours – one way! – to bring him soup and sit with him while he ate lunch, always leaving a few jars for later. After he died, we discovered 27 jars of soup hidden behind the stacks of paper bags in the pantry.”

Tina Pyne, who is the ultimate Southern hostess, describes her mother in the same way. She says that was the reason her mother was so polite when receiving a less-than-appealing gift. “My father smelled a perfume on a lady that worked at the bank, and he bought it for my mother,” she says. “My mother thanked him profusely, but it stunk to high heaven. The next Christmas, he bought her a giant bottle of it. She finally told him, ‘Honey this stuff smells so bad.’”

Something similar happened in her own marriage. “Every Christmas my husband went to Williams Sonoma and got me peppermint bark,” Tina says. “I hate peppermint bark. It was eight years later when he was eating the bark, which he ate every year, he tried to give me a piece and finally realized I didn’t like it.”

Anita Gaylor’s truth came out a little more quickly with her husband. The owner of the boutique Cottage 288 says, “Stuart and I were first married and had just built a house. Stuart felt like he needed to buy me jewelry. It was a birthday, and he surprised me. First of all, I hate surprises, but I was like, ‘Okay let’s be nice.’

“So I opened this gift, and it was a cocktail ring. Very modern. Oh my gosh, it was so ugly. I tried and tried, but I just couldn’t wear it. So a couple weeks later, I go to him, and I’m like, ‘We built this house, you don’t need to buy me jewelry right now, just take the ring back, and we’ll get something later.’ So I talk him into it, and he takes the ring back. Nine months later, we have an anniversary, and he gives me this box. I knew exactly what it was. He loved the ring so much he had been saving it to give it to me. Finally my true self showed through, and I said, ‘Stuart, I hate this ring. I will never wear this ring.’ And then he was like, ‘But you said you loved it!’ He so fell for my fake I loved it. So I told him: ‘I lied. I lied, I lied.’ He’s never surprised me with jewelry again. If we get anything, we go together. It’s so much better.”