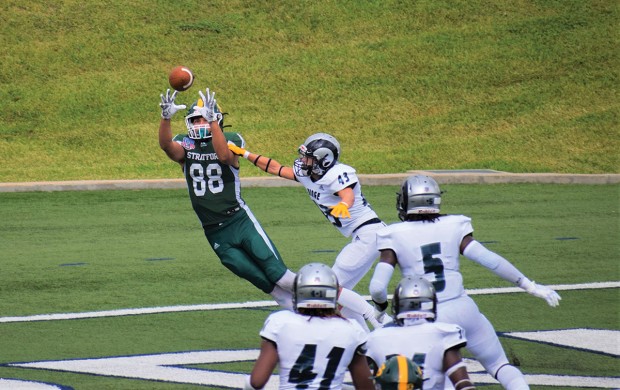 With an electrifying surge down the final homestretch, former Kinkaid Falcon Raevyn Rogers captured a bronze medal in the 800 meters at the Tokyo Olympics. Rogers was in the back of the pack for most of the race until mounting an incredible charge on the last straightaway to finish third by the slimmest of margins. With the remarkable finish, Rogers shared the Olympic-medal stand with fellow American Athing Mu, who dominated the race to win the gold medal.

The victory not only sparked celebrations from Raevyn’s family and friends back in Houston, but also from a packed auditorium of current football players at The Kinkaid School, who gathered on an early Tuesday morning to watch the Falcons 2014 graduate in action.

“After Raevyn qualified for the Olympic finals, we explained to the entire football team about the amazing legacy she had left here at Kinkaid,” said Falcons football coach Nathan Larned. “When Raevyn took off on that remarkable final kick everyone started getting excited, and then the room just totally exploded in celebration when she pulled off the third-place finish. It’s just truly special and awesome for the entire Kinkaid community.”

As the football season kicks off this fall, four seems to be the magic number for the Stratford Spartans under fourth-year head coach Todd Rankin. “It’s my first senior class as head coach here at Stratford, so this is the first group of guys I’ve had in the program for a full four years. It’s a special and sentimental type of season. We feel like we’re building a really solid foundation.”

The Spartans return several standout players, including junior tight end Hawkins Polley, who is being recruited by several major collegiate programs. “Hawkins is a big target who makes acrobatic catches,” said Rankin. On the ground, senior running back Diego Denson is a solid threat, while on defense Rankin had high praise for senior safety Anthony Cuhel and junior linebacker Cooper King.

“We’re excited about this entire team,” said Rankin. “Our junior varsity went undefeated with a 10-0 record last year, and the year before that they were 9-0. They’re bringing a winning mentality to the varsity level.” 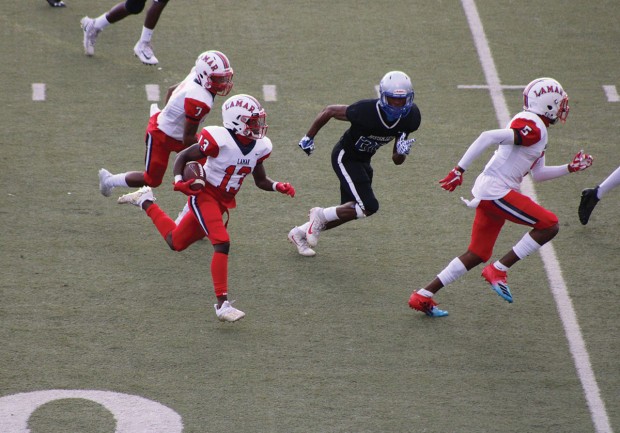 SET TO GO The Lamar Texans are looking to bounce back this season after having their 10-year district championship win streak snapped by the Heights Bulldogs. Junior wide receiver Terrence Rone (#13) is among the top returning players for the Texans.

The Lamar Texans enter the football season with a chip on their shoulder after falling short of a district championship for the first time in the last 10 seasons. The Texans also had their remarkable 77-game district-win streak snapped last year by the Heights Bulldogs.

“It absolutely provides incentive for us,” said Lamar head coach Mike Lindsey. “Over the entire off-season our kids have been motivated by that loss. Even though we bounced back from that defeat with a playoff win over Memorial, our guys are determined to live up to the rich tradition of Lamar football.”

The Texans welcome the return of a duo of three-year defensive starters in safeties Jaivion Green and Kobe Jones. In addition, senior cornerback Jordan Jackson is being recruited by several colleges while standout defensive tackle Kaleb Randle returns after missing last season with an injury. On offense, junior Kenneth Rosenthal, who guided the Texans to this summer’s 7-on-7 state tournament, leads the way, along with receivers Zach Green and Jackson White and running back Kenneth Kennedy.

“All things considered, it's been a really smooth transition since we’ve pretty much kept most of the coaching staff intact,” said Fikac, who was the Crusaders’ defensive coordinator under Kubiak. “The thing I really like about this year’s team is the leadership of our senior class. It’s a hungry group, and we also have some outstanding juniors who we expect to step up this season.”

Those juniors include the dynamic tight-end duo of 6-foot-5-inch Chico Holt and 6-foot-4 Thomas Jewett. “Both are great talents and leaders,” said Fikac.

Another pair of key returnees for the Crusaders are running back Joel Crawford and inside linebacker Jake Foster. “They work extremely hard and are the pinnacle of true program guys,” said Fikac. Meanwhile, at the all-important quarterback position, junior Bryan Fucik and seniors Alex Buettgen and Mark D’Andrea are all battling to lead the Crusaders' offensive attack.