So who do we have here? 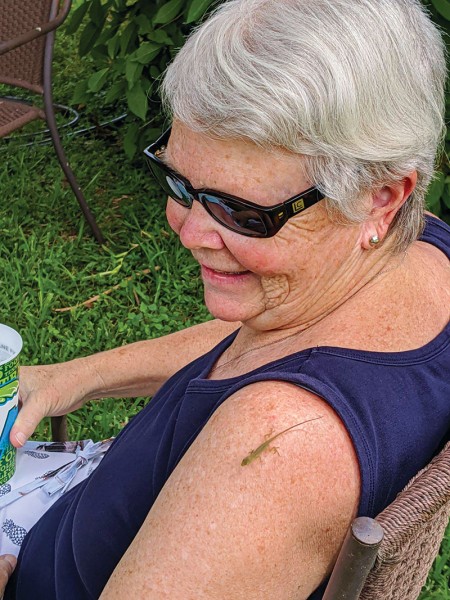 Right before Covid, I went on a trip to Madagascar. It was fabulous. The guided trip was devoted to seeing wildlife, much of which lives nowhere else on earth, most notably lemurs.

But when our caravan of four-by-four vehicles would come to yet another screeching halt for everyone to pile out and point their cameras at yet another gecko or chameleon, I found myself thinking, these people should come to my backyard in Houston.

I have at least as many kinds of lizards … and insects … and actually a lot more mammals … right off my back step.

I dismissed the thought as a bit of misplaced Texan pride. 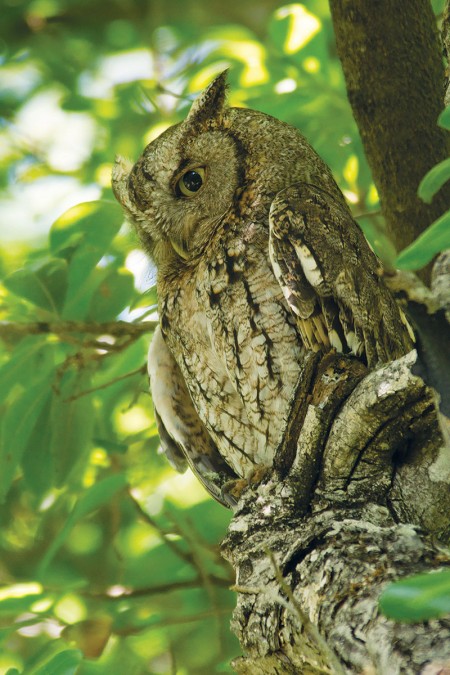 The last time the Nature Discovery Center in Bellaire did its twice-yearly “bio blitz” census of wildlife in the 3¾-acre Russ Pitman Park, it uncovered 350 species, including two kinds of owls, three kinds of hawks, eight kinds of spiders, and nineteen different kinds of butterflies and moths.

Eric Duran, head naturalist at the Nature Discovery Center, points out that Houston is under a major migration route for birds, the Central Flyway, and is near where it converges with another major route, the Mississippi Flyway. We are also on the itinerary for migrating butterflies and dragonflies and are at the intersection of four ecosystems: tall-grass prairie, the bayous, coastal prairie, and bottomland hardwood.

Though they may be very familiar to us, the critters who visit our yards are as interesting as the ones I traveled across the world to see.

Take dragonflies and their more petite and slender cousins, damselflies, for example. There are many different kinds in Houston, most with names that sound downright poetical, like the roseate skimmer and the wandering glider. Some of these dragonflies, like our more famous rockstar insect traveler, the monarch butterfly, migrate thousands of miles every year. 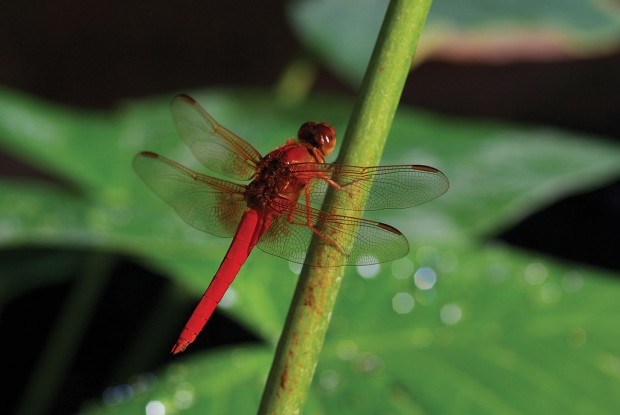 Dragonflies don’t have an internal way to regulate their body temperature. That’s why you may see them seeking sun sometimes and shade others, and perching in convoluted poses, such as with their butts up in the air; they are trying either to stay warm or to cool off. Their colors can even fade or become more intense depending on their body temperature, like a mood ring.

Dragonflies, which breathe air, and their nymphs, which have gills, are such voracious predators of mosquitos, which the adults often catch and devour in midflight, that Harris County has experimented with using them to control our mosquito population, according to The Houston Chronicle.

“And if you want to see something wild, look up ‘dragonfly sex,’” suggests Deborah Lancaster, whose garden in Bellaire is designed to attract and support wildlife.

The male dragonfly grabs the female by her neck. According to Introduction to Dragonfly and Damselfly Watching, a booklet available on the Texas Parks and Wildlife website, that initial impact of mating dragonflies is often audible. They then arch their bodies to join their bottom ends, forming what is called “a wheel,” but which actually looks like a heart shape. (Aww.) They can fly around like this for hours. 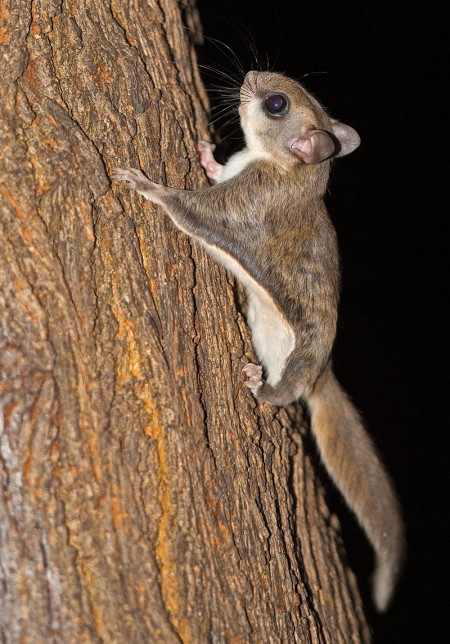 Squirrels may seem ho-hum, since they, especially our gray squirrel and our reddish-colored fox squirrel, are so common, but we have a whole other kind most people are not even aware of: the southern flying squirrel.

If you see something flying at night but it isn’t fluttery like a bat, you just might be looking at a flying squirrel. Flying squirrels look like little squares against the night sky. That’s because these tiny doe-eyed squirrels, only about five inches long, don’t fly but rather glide.

Before they jump out of a tree, they poke their little heads up and look around to see where they want to land. Then, when they jump, they stretch out their limbs to use their patagium, a fur-covered membrane that runs from their front feet to their back ones, to catch air like a sail. By manipulating their legs and tail, they can make even sharp turns and gain altitude. To land, they point all their legs forward, turning the patagium into a parachute to soften their impact.

According to Kelsey Low, adult programs manager at the Houston Arboretum & Nature Center, you are more likely to hear flying squirrels in the evening – they have high-pitched squeaks and are often in groups – than see them.

Speaking of hearing wildlife, you are also much more likely to hear our Eastern screech owl than see them. And if you do spot them in a tree, you might wonder how such a tiny thing can be so loud. While screech owls, one of the smallest owls in the U.S., stand only about eight inches tall and weigh less than six ounces, the Great Horned Owl, who also lives here, can be 25-inches tall with a wingspan of up to 60 inches.

Is it opossum or possum? According to Merriam-Webster, either is correct. The official name of this animal, the only marsupial in the United States, is the Virginia opossum. (Marsupials are mammals that keep their babies in pouches.) About the size of a cat, a possum looks like a cross between a rat and a cat and also looks like it has lived a very rough life. The Wildlife Center of Texas refers to them as “aesthetically challenged,” but goes on to say that possums “are probably the single most important wild animal to your backyard ecology.” 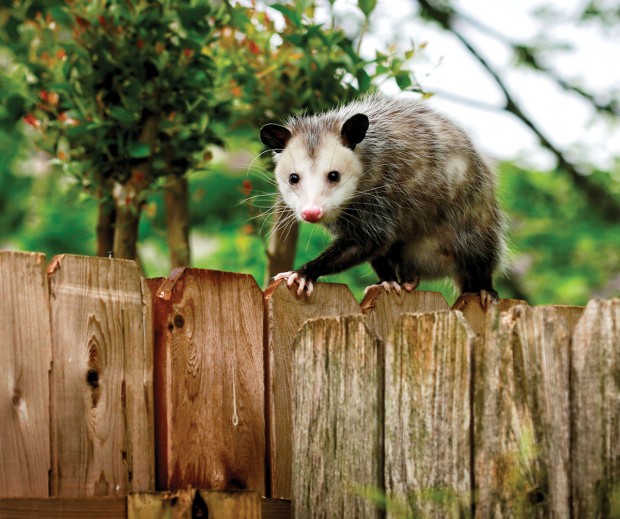 “Possums attract ticks but then groom themselves and eat those ticks. They can bring down the population of ticks in the area where they live,” says the Nature Discovery Center’s Duran. It’s been estimated that a single possum can eat 5,000 ticks in a single season. They are also the only mammal who routinely eats snakes, including poisonous ones. They are immune to snake venom. They also eat snails and slugs and carrion, like that animal that died under your house and would otherwise start to stink. They do not carry rabies.

Though they have fifty pointed little teeth, “more teeth than any other native animal,” according to the Wildlife Center, and they will hiss and growl when cornered, they are not aggressive.

And when they “play possum,” they are not playing. That reaction, from fear, is involuntary, like fainting. Their eyes will stare, their tongues protrude, they will drool, their bodies will become stiff, they will even begin to stink like something rotten, all to get a predator to pass on eating them. This state can last from a few minutes to up to four hours. According to the Opossum Society of the United States (really), the first sign that a possum is beginning to come around is that its ears will twitch.

Although they only sleep in the same place for two or three nights, possums build themselves nests. They use their prehensile tails, curled tightly, to carry their nest-making materials.

This hardly scratches the surface of who’s living in Houston with us. There are alligator snapping turtles in our bayous, looking like prehistoric monsters, that can get, though rarely, up to 250 pounds. We have Mexican free-tailed bats under the Waugh Street bridge. If you go at dusk to watch them emerge, Kelsey Low recommends looking also for the hawks waiting to swoop down and grab any that appear injured or weak. 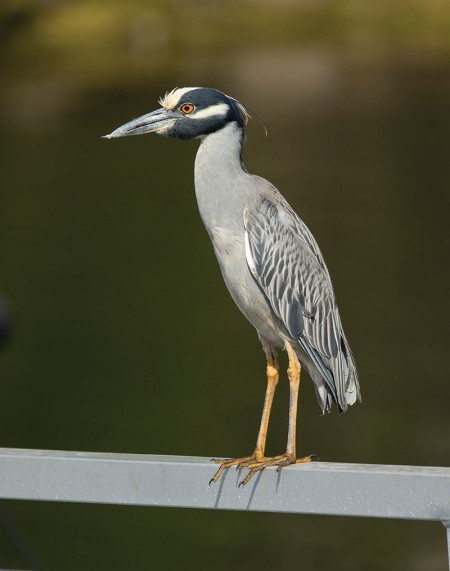 Look for our two-foot-tall night herons, both the yellow-crowned and the black-crowned varieties, nesting happily in our towering live oak trees. There are moths that look like – and are the same size as – hummingbirds, the aptly named hummingbird moths. The mud dauber, a solitary and nonaggressive wasp, builds little mud nests for its young – and stuffs them full of paralyzed but living spiders to feed them. There can be hundreds of spiders in a single mud dauber nest. (That’s the stuff of nightmares, isn’t it?)

While, by and large, it’s best to leave our wildlife alone, there are, according to local naturalists, some simple things we can do to make their lives in our city a bit easier.

When possible, turn off our outdoor lighting and shut our blinds at night. Migrating birds travel at night and lights can disorient them and even cause them to crash into buildings.

Plant native plants in our yards. “While obviously converting your entire yard to native plants would be great,” says Low, “even just one native plant, a tree, a shrub, even a flower in a pot, can have such a big impact.” She points out that while a crepe myrtle tree, which is not native, might support one or two species of caterpillars, a native oak will support hundreds of them – and that’s just caterpillars.

And if you’d like a handy way to identify an animal, or a plant, that you come across, iNaturalist is a good, free app from the California Academy of Sciences and National Geographic. 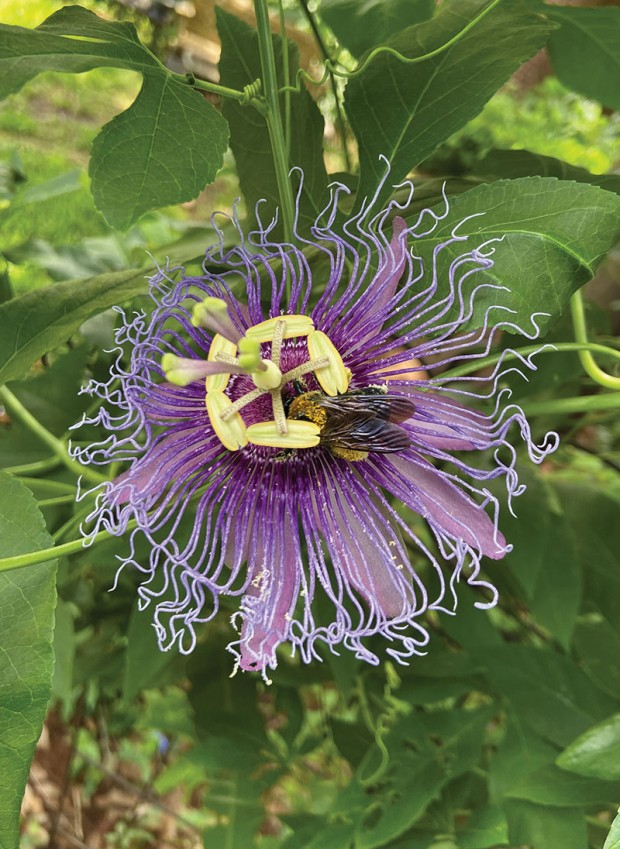 A carpenter bee on a passionflower. 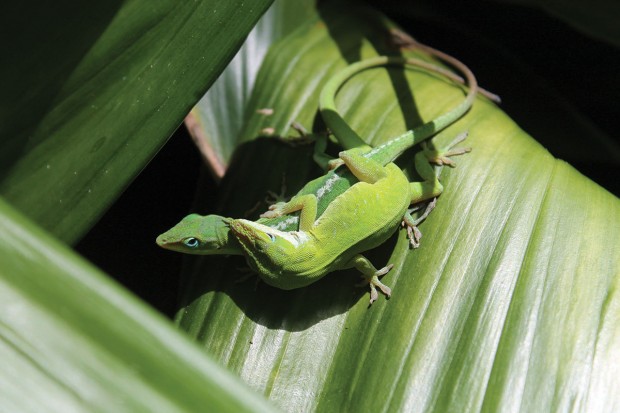 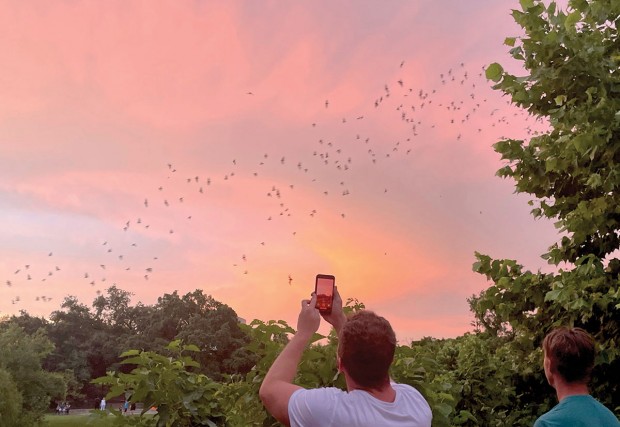 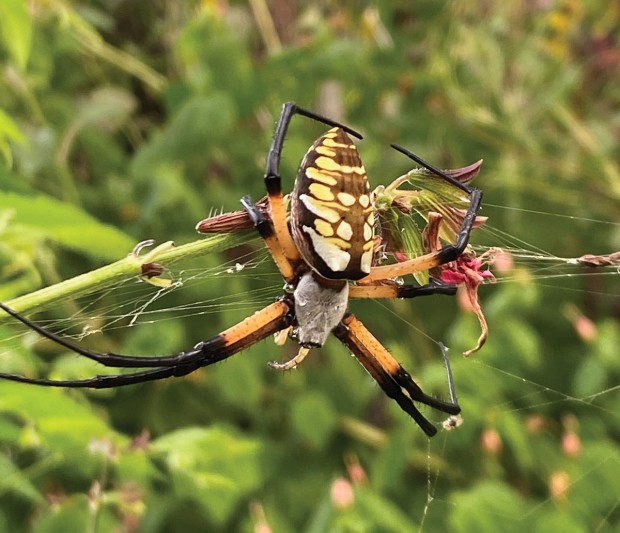 An orb weaver or zipper spider.