“These are your fuse boxes” 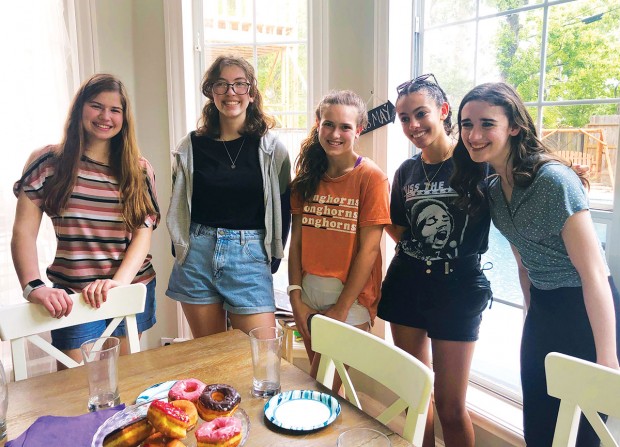 PRACTICAL SKILLS Learning to be an adult is hard, but Jenna Pedley, Anna Guckenburg, Sophia Shebay, Sarah Jones, and Lily Delahoussaye are getting a head start, thanks to Sophia's dad, David Shebay.

Learning to be a grown-up can be tricky. That’s why Bellaire dad David Shebay is organizing “adulting” classes for his 16-year-old daughter Sophia and her friends.

“I was thinking of all the things I needed to teach my daughter. And I wanted other people – someone in a uniform – to be saying them because there’s only so much teenagers can hear from their parents,” he said. “I thought if I got a group together, it would make it more fun.”

So he got to work. The PricewaterhouseCoopers consultant assembled a curriculum of sorts for a series of classes that teach everything from car mechanics to cooking to how to use power tools. “We’re basically just doing some things they need to know but aren’t learning from any other place.”

David hosted the first class over the summer; his wife Elizabeth brought in Shipley’s doughnuts so the girls would hang around afterward. “We’ve basically got two years to space them out,” he says, referring to the time before his daughter and her friends go off to college.

This summer’s class, held at Feld Park, focused on car safety. Timely, because the six girls who attended were 15 and 16, about to start driving. “We had a Bellaire police officer come and tell them what to do when you get pulled over, what to do if you’re in a wreck, how to be safe while you’re pumping gas.

“And we had John’s son from John’s Mechanic Shop [John Georgalos at John’s Xpress Lube] come. We take our cars to him. They knew us, and we asked if he would mind coming by for 20 minutes. He showed the girls: These are the fluid levels, these are your fuse boxes, this is how you change a tire, what you should ask your mechanic when you take your car in. He told them if you hear a thum thum thum sound, this is what that means. If you hear a whee whee whee sound, this is what that means.

“This is all stuff you don’t get in driver’s ed.”

The girls brought their cars to the park so they could see where things were in their own cars. “When the guy was showing them where to put the jack, the girls were on the ground underneath the car. They were leaning in around the engine when he was showing them the fluid levels. The expectation is they don’t know what is going on, but we want to change that for these girls.”

David’s daughter Sophia, a student at St. Agnes Academy, says the most important lesson she learned in the class was what to do when you’re getting pulled over on the highway. “You don’t pull over halfway over a flyover,” she remembers. “Wait until you’re ready to exit, so you can do it safely.”

The inspiration for David to dream up the adulting classes was bigger than making sure his daughter knew how to change a flat tire. “I had lymphoma last year,” he explains, “and I went through chemo, and that made me do a gut-check. And I said, hey, if there’s stuff on my list, let’s go ahead and get it done.”

Besides teaching his daughter and younger teenaged sons Jonathan and Eli important life lessons, David’s list included getting his pilot’s license and reaching some goals at work. David was diagnosed in June of 2020 and completed six months of treatment. His cancer is in remission.

Over the next two years, “a local chef will come teach them a signature dish, something they can make at college when they want to entertain,” David says. “We’ll have another one for home repair, like how to fix a leaky faucet, how to turn the electricity off if you need to. There will be one about safety with Crime Stoppers that will teach them things like don’t drink something you didn’t open.

“One class will be on finance – how to balance a checkbook, this is what you do with credit cards, this is why you start putting money away in a 401(k) as soon as you can. Another one where they’ll learn how to shoot a gun from a licensed instructor. And another on power tools,  how to use a drill, how to use a saw.

“This is a chance to say all the things we all want to talk about but we don’t get to,” David says. “A chance for the girls to learn to be self-sufficient, and to do things they need to do in life.”