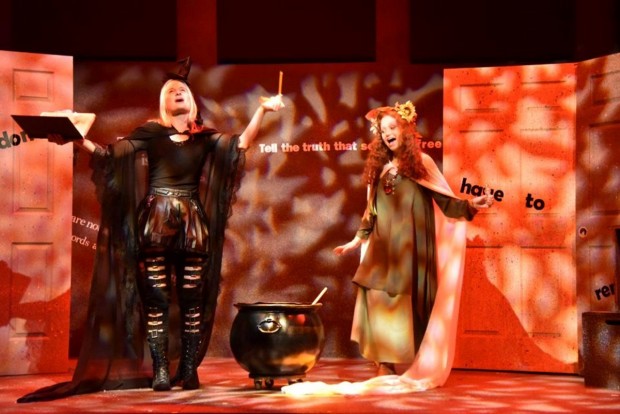 Sitting in a theatre waiting for a production to begin is a thrilling experience. Over the rustling of programs, shifting in seats, and noisy chatter, a voice comes over the loudspeaker to remind everyone to power off their phones and the theatre suddenly goes dark. Meanwhile, the performers hurriedly fix their makeup, adjust their costumes, and practice their lines backstage.

We usually think about this experience through either the perspective of an audience member or a performer, but we do not often consider the playwright. St. John’s has allowed students to explore a new side of theatre by encouraging students to write their own plays.

Over the summer, students received an email regarding the Student Playwright Festival, an opportunity where they could write and submit a 10-minute play to be reviewed and possibly chosen to be performed by students. The only requirement was that the play illustrate the theme “To Tell the Truth”.

At the end of the writing process, 9 plays were chosen to be casted, directed, and performed. Auditions were held to identify which roles appropriately fit each student, and the plays were directed by 2 faculty members at St. John’s, Bill McDonald and Jamie Stires Hardin. Each play had a unique plot, ranging from a murder mystery to a monologue about a girl who broke her mother’s vase, and even a science fiction play that portrayed Siri as a person.

I wrote a play entitled The Spell of February 14th, which was about 2 witches who decided to cast a spell on their ex-boyfriends, forcing them to only tell the truth. Seeing our plays on paper was exciting, but what was really impactful was when the playwrights attended rehearsals and had the opportunity to witness the plays turn into reality. As they evolved from the actors simply reading their lines off of the script to performing with stage directions, props, and fully-memorized lines, the plots that we had so carefully crafted had now come to life.

After hours of rehearsals each week for two months, the hectic tech week finally arrived. Actors spent about 10 hours that week preparing for the performance, as they rehearsed with costumes, make-up, and lighting for the first time.

I watched the full run-through of my play and was astonished to see how beautifully everything came together. Opening night finally arrived, and the Blackbox Theatre was filled to capacity with parents, teachers, and friends. This experience allowed students to explore theatre from a new angle and get a behind-the-scenes view into what screenwriting is really like.