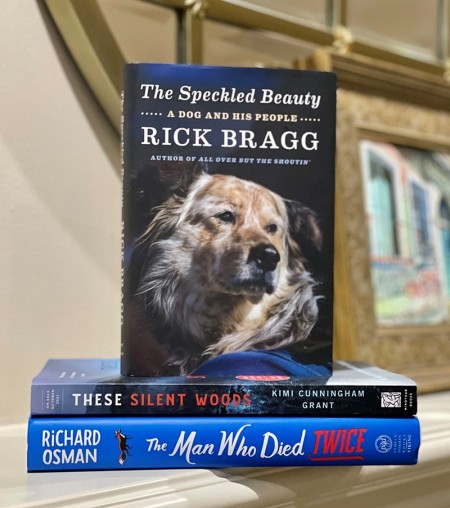 This week, Cindy Burnett highlights her top reads of 2021.

So many great books came out in 2021, and I found the time to read as many as I could. Three recent Page Turners columns consisted of my favorite books published in 2021 by genre - nonfiction, historical fiction and then mysteries and fiction together. This week, I am writing about my top 12 of the year – those that resonated the most with me and have stayed with me long after I finished them. I include the summaries again for anyone who missed the genres columns. After much deliberation, I managed to narrow down my list to these titles (they are listed alphabetically because I enjoyed them all and could not rank them):

Better Luck Next Time by Julia Claiborne Johnson - Better Luck Next Time is set on a divorce ranch outside of Reno, Nevada in the 1930s, told from the perspective of a man named Ward. The ranch houses women who are required to spend six weeks in Nevada to gain residency and then they can obtain a divorce. When the story opens, it is present day; Ward begins to reflect back on one particular six weeks, and the two women Nina and Emily that changed the trajectory of his life. The book is fantastic – I love her writing, the setting, and the characters - and I really love Ward; he is now one of my favorite fictional characters.

The End of Men by Christina Sweeney-Baird – Sweeney-Baird’s debut speculative fiction novel, written prior to COVID’s arrival, tackles the premise of what the world would be like if 90 percent of the men disappeared from the planet. Set in 2025, The End of Men opens just as the first case of the virus has appeared and follows various characters (mostly women) as they deal with this mysterious virus and come to terms with a changed world. Through their eyes, Sweeney-Baird chronicles how the world would be impacted by such a large gender imbalance - from the loss of husbands and sons to the changed workforce and what it now would mean to give birth to a son. The End of Men is a truly thought-provoking read that will stay with me for a long time.

House of Sticks: A Memoir by Ly Tran – Ly tells the story of how her family moved to the United States as part of a relocation program from Vietnam when she was three. They are resettled in an apartment in Queens, and they speak no English and are required to find their own work. Plus they are required to pay back the cost of their flights to the U.S. Ly’s father spent 10 years in a Vietnamese prisoner of war camp and has severe PTSD. So on top of trying to navigate the immigrant experience, her family is also trying to cope with his anger and irrational choices. For several years they perform sweatshop work as the kids go to school during the day and work a lot of the night. Ly tells her family’s story with grace, and she provides great insight into what the immigrant experience is like for one family.

Once There Were Wolves by Charlotte McConaghy - Inti Flynn and a team of biologists arrive in Scotland to help re-introduce wolves back into the Highlands through a program similar to the way wolves were returned to Yellowstone National Park. While participating in this venture, Inti also hopes to help her twin sister Aggie recover from a traumatic event in her past. Facing resistance from the locals, Inti struggles to reassure them that the wolves won’t harm them as long as they are left alone but instead will assist with balancing the ecosystem by slowing down climate change and environmental degradation. McConaghy’s writing is lyrical, and her descriptions of both the wolves and the wild Scottish landscape cause them to leap off the page. Once There Were Wolves is a beautiful and haunting story that will remain with me for a very long time and will be in my top reads of the year. It is truly not to be missed.

Once Upon a Wardrobe by Patti Callahan – Callahan’s beautiful, magical, and captivating new book Once Upon a Wardrobe delves into the question of what inspired C.S. Lewis to create Narnia. Megs Devonshire studies math and science at Oxford and relies on facts versus intuition; when her terminally-ill brother George becomes infatuated with a new book The Lion, the Witch, and the Wardrobe and implores her to find out how Narnia came about, Megs finds herself visiting C.S. Lewis, an Oxford don, and his brother Warnie hoping to answer George’s questions. Instead of providing her answers directly however, Lewis tells her stories about his own life growing up which she then relays each weekend to George. While Megs struggles to find the connections, George helps her understand the stories that Lewis relates and how they led to the creation of Narnia. This is an absolutely beautiful book.

The Personal Librarian by Marie Benedict and Victoria Christopher Murray – Belle de Costa Greene worked as J.P. Morgan’s personal librarian and curator of his private library housed in a townhouse off of East 36th Street before the collection became the Morgan Library and Museum. While she became an influential individual in the art world and one of the country’s most prominent librarians, she hid a devastating secret – she was a Black woman “passing” as a white woman and moreover was the daughter of the first Black graduate of Harvard. The Personal Librarian chronicles Belle’s life and legacy and what it was like to be torn between success and the desire to be herself. I recommend this one to people all the time.

Songs in Ursa Major by Emma Brodie – This beautifully-written debut tells a fictionalized, loosely-based version of the relationship between James Taylor and Joni Mitchell in the late 1960s. This coming-of-age tale follows Jane Quinn, a talented singer, as she rockets to stardom, encounters extreme sexism in the music industry, battles with wanting to stay true to herself and her music, whether to choose love or a career, the stigma of mental illness and more. Brodie brings the music of the era to life and had me wishing I could actually listen to Jane’s music.

The Speckled Beauty: A Dog and His People by Rick Bragg – In The Speckled Beauty: A Dog and His People, Bragg chronicles how his life was forever changed by the arrival of a half-blind and poorly behaved stray dog he eventually names Speck. At age 60, he finds himself recovering from non-Hodgkin’s lymphoma and heart and kidney failure and having to live in his mother’s basement. When Speck arrives, Bragg doesn’t know what to make of him but eventually realizes he has been granted the gift of an unruly and hilariously poor behaved dog that loves him unconditionally. From a chapter about the perfect dog he wanted (“The Dog I Had in Mind”) to one about how the dog kept tripping him up (“Tumbling, Tumbling Down”), Bragg brings to life his adventures with Speck and how the rescuer ultimately becomes the rescued. We can all learn from Speck about how to live a life of unbridled joy and to love with abandon even when life has knocked us down. And thankfully, unlike many dog books, Speck is still alive and terrorizing people (and other animals) in Alabama.

I would love to hear your favorites from 2021. Please drop them in the comments below. I wish everyone a wonderful holiday season and happy reading!