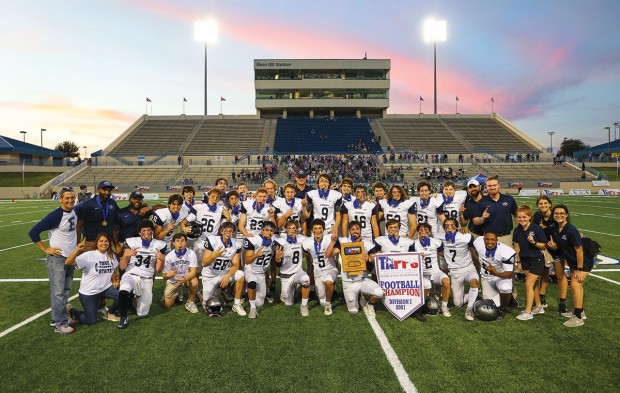 For the second time in the last three seasons, The Emery/Weiner School is the TAPPS Division 1 state champion in six-man football. The Jaguars defeated San Marcos Academy 69-24 in the state final, with the game ending in the third quarter due to the 45-point mercy rule. The championship also capped off an undefeated 12-0 season for the Jaguars while marking the school’s third state championship in six-man football since joining TAPPS in 2014.

“We’re thrilled and excited to bring another TAPPS state championship back to Stella Link,” said Jaguars head coach Jason Reimers. “For this record-setting senior class, there’s no better way to go out than to have their last dance on the biggest stage.”

No player came up bigger in the state final than the Jaguars’ all-state senior Leo Gerst, who rushed for a lofty 220 yards and six touchdowns while also returning a kickoff 75 yards for another touchdown in the victory. “We have 15 seniors on this team, so we really felt that kind of urgency to go out with a bang. It’s kind of like that Michael Jordan documentary The Last Dance. It was our final season together,” said Gerst.

“Everyone on this team worked well together,” said senior Vincent Banks, who played a major role for the Jaguars as a wide receiver, linebacker, and place kicker. “We had great chemistry, and I think that’s one of the best things you can have on a team.” 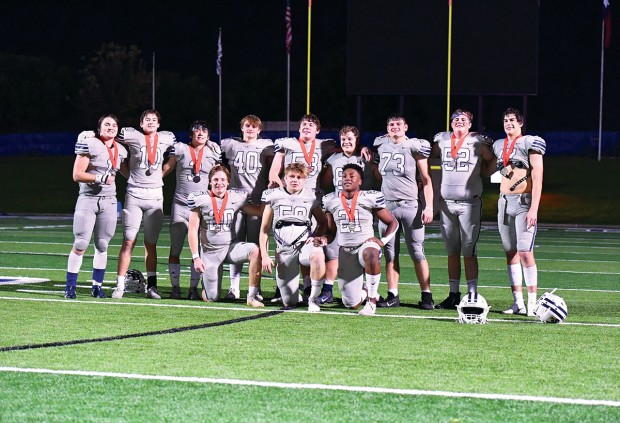 STATE FINALISTS It was a sensational season for the Second Baptist Eagles, who advanced to the state finals for the first time in 22 years. The Eagles ultimately lost to Dallas Christian 33-14 in the TAPPS Division II state championship game. (Photo: Michael Prothro)

Back in traditional 11-man football, it was a magnificent season for the Second Baptist Eagles, who advanced to the state finals for the first time in 22 years. The Eagles reached the TAPPS Division II state-title game before ultimately losing to Dallas Christian 33-14 in the championship final.

“I thought it was an extremely successful season, especially based on the fact that we lost so many great kids up front on both our offensive and defensive lines from last year’s team. The expectations were questionable, but the kids more than exceeded expectations,” said Eagles head coach Terry Pirtle.

To get to the state final, the Eagles’ outstanding playoff run included a victory over Austin Regents, avenging losses to Regents in the previous three state semifinals. Second Baptist also defeated a Fort Bend Christian Academy team that had ended the Eagles’ 33-game district winning streak just a few weeks earlier. “Those were both great victories for our guys,” said Pirtle.

For the season, Second Baptist was led in big part by senior defensive back Everett Skillern, who was named the Private School Player of the Year in Greater Houston. Skillern will play college football at Brown University. On offense, all-state running back Eli Smith rushed for 1,700 yards and 26 touchdowns. Smith will play at the next level for Villanova University. Pirtle also had high praise for defensive lineman Austin Courtney, who made a successful transition from linebacker this season. “Austin was simply outstanding all year,” said Pirtle. 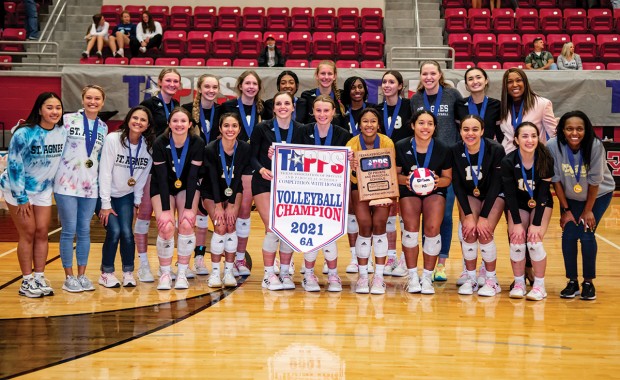 CHAMPIONS AGAIN The St. Agnes Academy Tigers won the TAPPS 6A state volleyball championship for the second time in the last three years. The Tigers defeated Plano Prestonwood in the state final to finish the season with a 37-7 record. (Photo: Mary Brenda)

In volleyball, St. Agnes Academy capped off a spectacular 37-7 season by winning the TAPPS 6A state championship. The Tigers defeated Plano Prestonwood in four sets to secure their second state championship in the last three seasons.

“We took care of business,” said Tigers head coach Cydryce McMillian. “Our girls have grit. They went through some adversity this season, and you have to go through some challenges in order to be a champion. One of the things we identified in our vision was ‘applying the pressure.’ It was our motto all season.”

“It was really special to win state,” said Tigers senior standout Sophie Agee. “I really think our team had an amazing connection and great chemistry on and off the court.”

The Tigers were on a mission this season after losing a five-set heartbreaker in last year’s state final.  “Losing that state final last year was really rough. I remember the ride back home afterward. It was pretty sad, but it just motivated us even more for this season,” said Tigers junior Piper Stephenson.

It’s been an amazing three-year run for the Tigers, who, along with winning state championships this season and in 2019, were also state finalists last season. “We knew we had a lot of good talent and terrific coaches when I first arrived here three seasons ago, but we just needed to need to identify those key pieces for championship-like moments,” said McMillian.