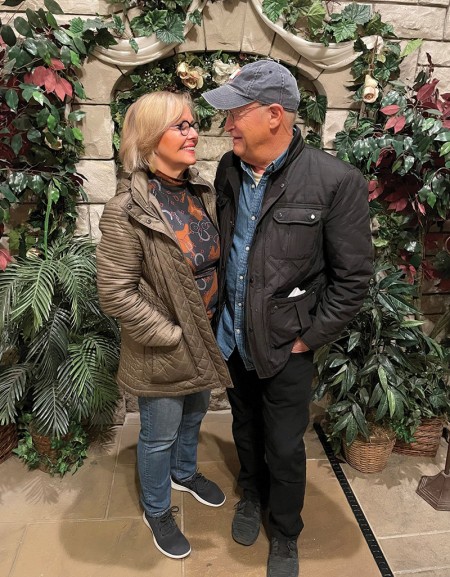 GETTING I DO OFF THE TO DO LIST Cindy finally nabs Stan-the-Man.

Stan had decided to try a corn dog stand in Eureka Springs, Arkansas, when Cindy spotted a sign next door. “It’s a sign,” she thought. Not the sign that said Judge Roy Bean’s Old Time Photos. The one on the same door that said, “Legal Marriages Performed Here.”

While Stan was tending to his stomach, Cindy slipped off to see about getting the I Do off the To Do list. Is that romantic or what? She had managed to coerce a ring out of Stan a couple of months earlier. “You’re engaged,” everyone said. “When are you getting married?”

A small and simple wedding is not as small and simple as it sounds. Every idea meant someone would be left out. You can swat away these questions for only so long. Then, the “Eureka” moment! Just leave everyone out.

Eureka Springs was town No. 2 on a three-town Arkansas fall-foliage tour planned by Stan – first Bentonville, then Eureka Springs, and finally Hot Springs. Stan’s sisters call him the leaf chaser.

He loves fall and sets out yearly to catch it in all its glory, somewhere. He calls two statements the story of his life – “You should have come last week” or “You should have come this time next week.” This trip started out looking a little early, but the fall leaves seemed to multiply as the trip went on.

Eureka Springs is a bit like a younger sister to New Orleans, with Victorian-era shops wrapped precariously down a wooded cliff, along narrow streets built for horse and buggy.

Talk about steep hills! Uphill pointed your car skyward like a space capsule about to launch. Downhill tumbled you forward like a marionette suspended by seat belts, sending Cindy (the driver of the moment) into a faceplant on the steering wheel.

Now, she was just happy to have two feet on the ground while approaching a woman with long gray hair down to her elbows at the counter inside Judge Roy Bean’s wedding factory.

For a mere $80, this woman, an ordained minister, could have them married by the next day. All they needed was a marriage license, which could be conveniently acquired in the courthouse across the street, with driver's licenses and $60 cash.

The next day was Saturday, Nov. 6. The courthouse would be open until noon. Dressed for afternoon leaf-chasing, they decided to make it their first morning stop.

Cindy and Stan were about ready to head to the courthouse when Cindy realized she had been drive-sharing all the way to Arkansas without a driver's license. “Oh well,” she said. “Looks like we won’t be getting married.”

Stan‘s recovery at that news was remarkable. “No problem, let’s go eat.” He had already identified a brunch spot up one of those steep hills. But then, as the couple began their calf-crunching climb, Cindy thought, “I think I have a picture of my license on my iPhone.”  Eureka! There it was!

Cindy instantly turned around and started heading downhill. Stan broke out in a flop sweat and slowly followed on the downhill trek. It takes a lot to ask Stan to skip a meal.

A woman in jeans and a T-shirt working the courthouse marriage-license window took a brief glance at Cindy’s driver’s license image on her phone, shrugged, and said, “Only here could you get away with that.”

Marriage license in hand, Cindy and Stan headed back across the street to Judge Roy Bean’s place.

Cindy did not want to see her 66-year-old-self dressed like a hooker in a saloon with a noose around Cowboy Stan’s neck, so they saved the $200 photo/costume fee. A simple backroom marriage in their own jeans and sneakers, surrounded by fake shrubbery, was just $80.

The woman with the long gray hair made some appropriate-sounding remarks, inviting Stan to say a few words that he had written on the back of a business card. “The love you take is equal to the love you make.”

This struck Cindy as rather unoriginal. She teared up anyway. She then launched into a bit of an unplanned ramble, being a little too confident in her own ability to be spontaneously articulate.

Later, while compiling this account, she texted Stan to ask him if he remembered anything she said. His reply: “If you can’t be with the one you love, love the one you’re with.”

Of course, Cindy didn’t say that, but it reminded her why she married Stan. It fit in with her own personal motto: “Go with what makes the corners of your mouth turn up.”