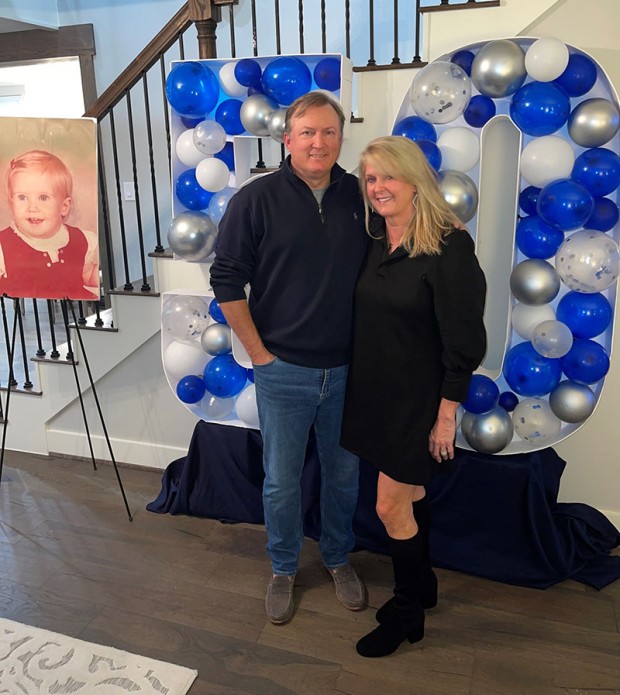 Friendly help. Their house remodel was finished just in time to celebrate Meg Sides’ 50th. Hubby Billy Sides, Susan, Chris, Annie, and Sophie Titterington, and Meg’s sister, Sylvia Harrison, hosted the birthday, with blue and white balloons shaped into a 50. Fifteen-year-old Syrine Roland-Piegue created an artistically delicious cake, and friends who had an ice-shots sculpture from a party contributed it to enhance the occasion. Jonathan Levine from Jonathan’s the Rub catered and bartended. As if that weren’t enough, an after-party “casino” started at 11 p.m. It was a smash! 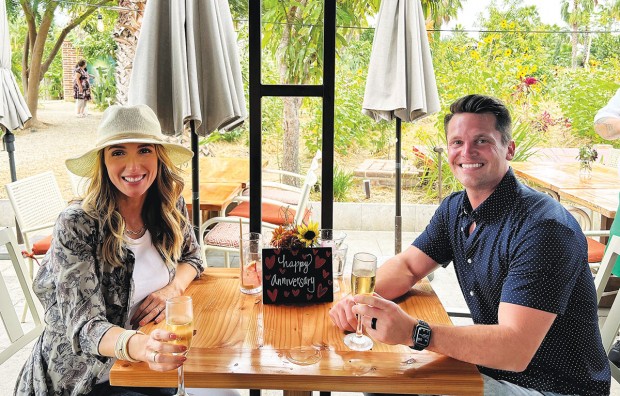 RELAX Tabatha and Brandon Urech vacation in Cabo with a lot of planned nothing.

A whole lot of planned nothing. They love their three young ones, but Brandon and Tabatha Urech celebrated their 10th anniversary without them. For five days at the Esperanza Resort in Cabo, they celebrated with couples’ massages, poolside relaxation, and walks on the beach. On past trips, including their honeymoon, they were more adventurous. This time, they dined in different restaurants and absorbed the tranquility. Tabatha’s mom watched their children at their home while they beached it.

Party reveal. The annual Christmas party started off with an ice breaker. What did you want to be when you were growing up, and what did you end up doing? The hostess, Mary Reed, wanted to be a Las Vegas performer and recently retired as an award-winning history/geography teacher at Memorial High School. The great reveal was a guest who had an impoverished background but got her doctorate and became a lecturer and author. In the gift exchange, Mary had to give up her prized Santa slippers to Joanne Lammon, but Denese Eckhard felt so bad she successfully searched for another pair for Mary. Vicki Friedman brought a birthday cake for Mary, and there was more than one “Merry” to sing about.

Team spirit to the max. Every fall, there is a game plan in the Barnhill household regarding South Carolina Gamecocks football. Marc and Kristi Barnhill usually drive 15 hours to Columbia, South Carolina, for the season. Their condo is across from the stadium, so game days are “cocky,” with lots of tailgating before the games. The games have become an excuse to see and visit with other fans who have become family over the past 17 years. On the return home to Spring Valley, they go through five states. In the past, they traveled with the team and other donors on the team plane to play East Carolina. All this and Kristi found time to host a Christmas exchange party at her house with 30 friends. Touchdown! 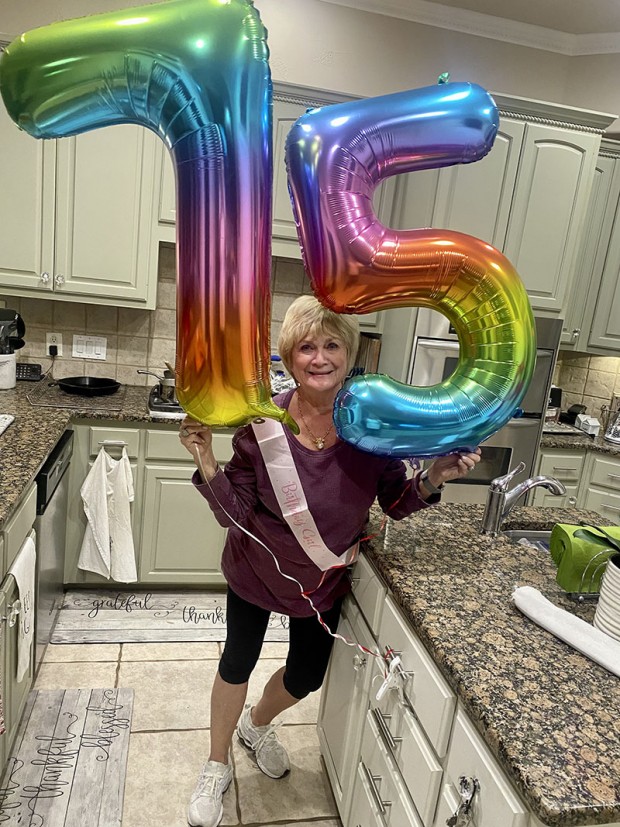 OUR NEW REALITY After the fun trip to Bentonville, Jana Stiffel’s 75th birthday party was “Covidly” cancelled but friends made sure she had balloons and presents.

Unexpected best trip. A trip to Bentonville, Ark., exceeded their expectations. Besides falling in love with the town, Scott and Jana Stiffel were ecstatic with the boutique 21c Museum Hotel a short walk to the Crystal Bridges Museum of Modern Art. The hotel itself is an art conversation. Outside was a 1962 Fleetwood Cadillac limousine covered with 30,000 small-change coins to symbolize the Walton Five and Dime origin of Walmart and the year the company was founded in Bentonville. A walk through the Northern Forest lights with Dale Chihuly sculptures lit up throughout was a highlight. As they returned to the hotel, a tornado ripped through town and caused havoc with the lights. The next day, all lights were on, and a Christmas parade ensued as the Stiffels walked to The Preacher’s Son restaurant, in a restored church near the square, for a final Amen of the day. 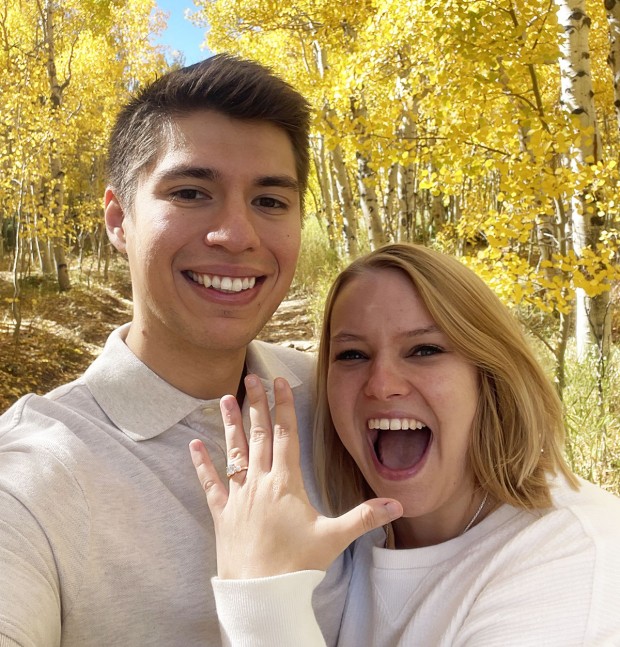 ENGAGED Could she be more excited? Rohail Khan proposes to his gal Hayley Friedman in Colorado.

Ever-lasting. They met at Stratford High School and dated for nine years. Hayley Friedman and Rohail Khan became engaged this fall when he popped the question surrounded by the ever-changing colorful trees in her fave place, Estes Park, Colo. Dr. Gary and Vicki Friedman and Blanca Moreno look forward to a fall wedding at the Friedmans’ vast ranch in Chappell Hill. Vicki and Hayley were quick to get tickets to the Bridal Extravaganza.

Joy to the world. To see how Joni and John Zavitsanos manage a Christmas gift exchange for 60 people is just pure joy. The evening started with a prayer by Fr. Michael Lambakis, head priest at Annunciation Greek Orthodox Cathedral, followed by a salmon dinner with lots of desserts. Mindy Bernard wore bling booties, which were noticeable as she kept exchanging gifts, and Mary Minas also got her choice gifts stolen. Lottery tickets were a popular gift, but did anyone win a jackpot? Everyone was a winner! 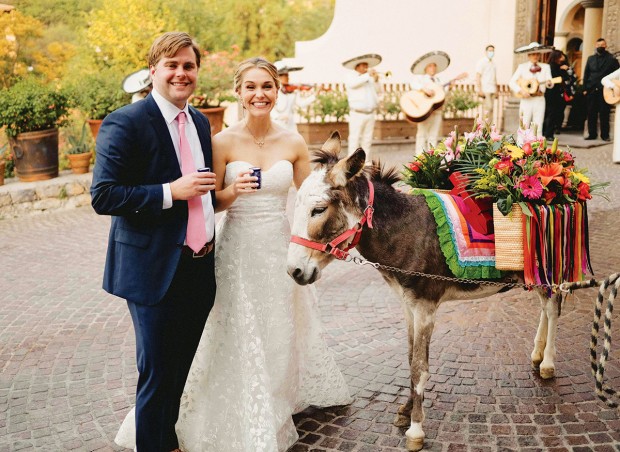 IT HAS A KICK Tully and KK (Heyne) Campbell, newly married, sip a drink with the tequila donkey. It was their first drink as a married couple. (Photo: Ildefonso Gutierrez)

Married in Mexico. Back in 2013 at a house party, Katherine Heyne (aka “KK”) and Tully Campbell met as students at UT Austin. Life progressed, and in 2020 the couple were on a family road trip with their two goldendoodles when Tully told KK the hotel gave them a doggie present. However, the “gift” was layered boxes with an engagement ring inside the tiniest. The wedding Dec. 18 also was layered, beginning at Casa Heyne in San Miguel de Allende, Mexico. The festive party was next door at Casa Cariño (Minnie Baird’s home), where Benito the tequila donkey and Mariachis and Mojigangas, giant puppets of the couple, delightfully surprised everyone. With a farewell to the couple honeymooning in Cabo San Lucas, parents Merry and Erik Heyne and Connie and Sandy Campbell continued to La Bamba in celebration. 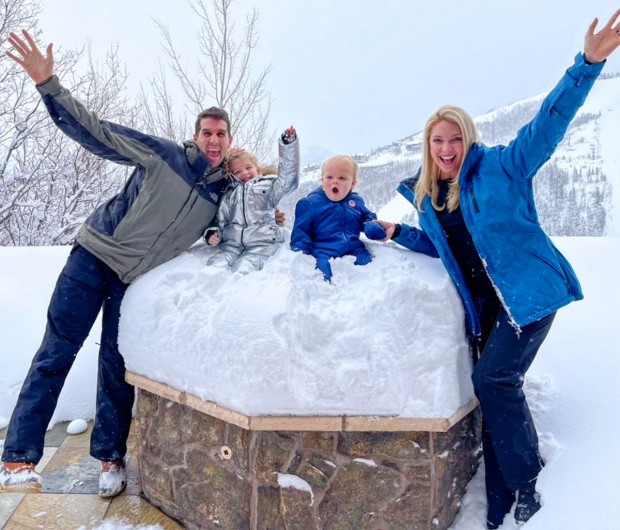 LET IT SNOW Jonathan, Braeden, Jackson, and Laura Bonck pile up on a pile of snow to celebrate the winter season in Deer Valley. Last year, they missed their winter trip for a good reason – Jackson was born.

Dear Deer Valley. Every Christmas, Laura and Jonathan Bonck take their holiday time in Deer Valley, Utah where Laura’s parents, Willie and Marian Langston, have a second home in Deer Crest by the St. Regis. This year they missed for a very good reason since their son, Jackson, was born on Dec. 22, a nice early present indeed!

A great date. Amable (Mabel), a petite baby at 5 pounds 13 ounces, was born 12-12-21 to Jennifer and Eric Zamudio in Vancouver, Wash. Eighteen-month-old big sister Winnie was trying to be helpful but preferred it when grandparents Jerry and Michele Hosko and Rodolfo and Melodee Zamudio took her out in the snow to play. Indeed, it was a white Christmas with love snowflakes falling everywhere. 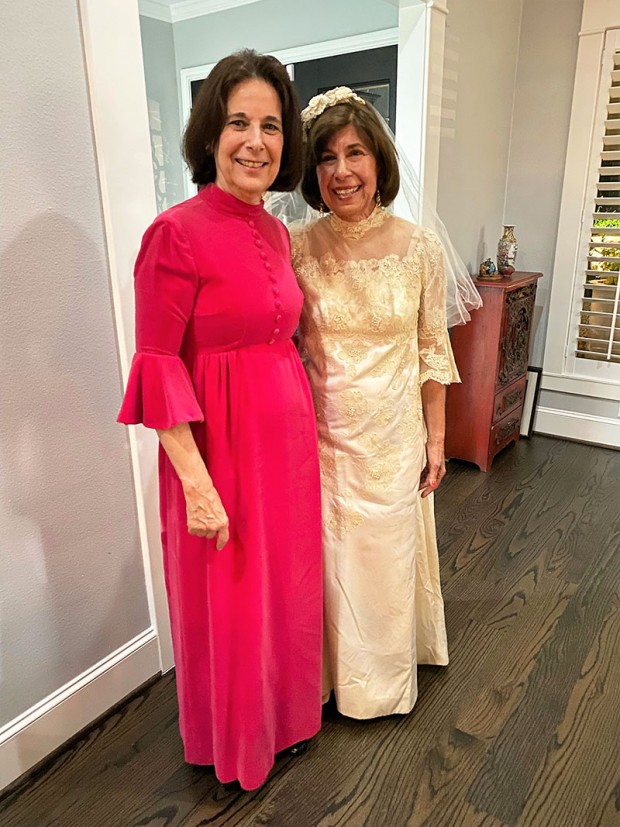 THROWBACK Susan (Phillips) Good in the original bridesmaid dress and Rosemarie Wagman in her original wedding dress surprise guests at the dinner party for Rosemarie and Ron Wagman's 50th anny.

Original. The intimate three-course dinner for 21 to celebrate Rosemarie and Ron Wagman’s 50th anniversary had more than one “original” surprise. The cocktail napkins were from the 1971 wedding reception, and memorabilia on display included her “going away” outfit, wedding gown, photos, piece of original wedding cake in a box (Southern tradition), and the kiddush cup used for the ceremony. The former maid of honor, Susan (Phillips) Good, left the table and came back in her hot pink velvet bridesmaid dress! So Rosemarie took the cue and donned her bridal gown and headpiece from her veil (also worn by daughters Joy Krohn and Julia Assef at their weddings) for the finale. Ron’s finale was to present his bride with gold earrings to commemorate the Golden Anny.