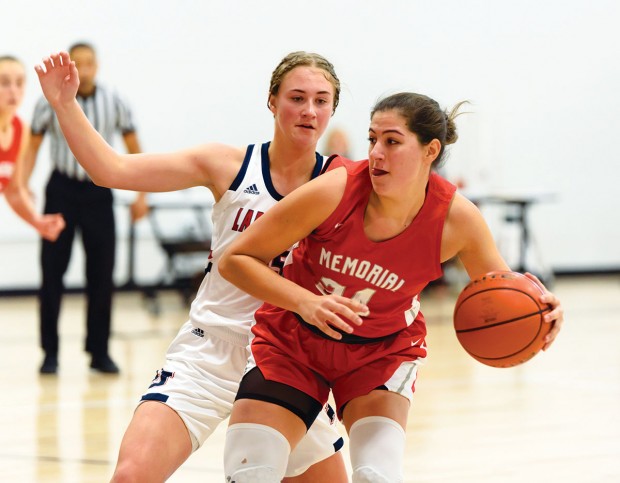 TOP 10 The Memorial Mustangs began the year with their first Top 10 state ranking in girls basketball. Pictured here with the ball for Memorial is leading rebounder Giana Vlahakos.

The Memorial Mustangs girls’ basketball team started off the new year ranked in the state’s top 10 for the first time in school history.

“It’s a pretty neat deal in that it’s never happened before, but at the same time we have to continue to prove that this is where we belong,” said Mustangs head coach Jyusef Larry. “The success we’ve had stems from the hard work these girls have invested in themselves and the dedication to the program over the last several seasons. It’s certainly our best team in my 12 seasons here at Memorial.”

The Mustangs’ offense is ignited by junior point guard Riley McCloskey, who has already surpassed the 1,000-point plateau for her varsity career. “Most great teams have a great point guard, and we have that with Riley,” said Larry. “Not only can she score, but she makes everything happen for us.”

The Mustangs’ leading scorer is sophomore Nicki Polochek, who averages 15 points a game, while another top scorer is junior Abigail Tomaski. “Abigail does a great job of scoring and also facilitating for us,” said Larry. In addition, senior Giana Vlahakos leads the team in rebounds and has hauled in over 500 rebounds for her career. “Everybody on this team can score,” added Larry. “We also have Mary Fielder and Kendall Lyons, who are an outstanding 39 percent three-point shooters. It’s just a cumulative effect of everyone being able to do something to help us be successful on the basketball court.” 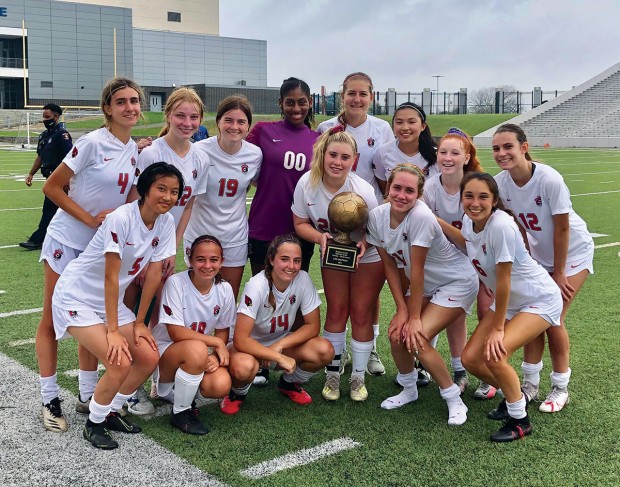 CHASING ANOTHER Under first-year head coach Kelli Tomlinson, the Bellaire Cardinals are in pursuit of a ninth consecutive district championship this season. Here, the Cardinals hold up their championship trophy after winning last year’s district title.

It is the start of a new era for the perennial powerhouse Bellaire Cardinals girls’ soccer team under first-year head coach Kelli Tomlinson. Tomlinson replaces longtime Cardinals head coach Alan Thompson, who guided the team to the last eight consecutive district championships. Thompson has since moved on to a position in school administration.

“Coach Thompson built this program and leaves an incredible legacy,” said Tomlinson. “It’s a privilege to step in the position and try and build on his success. It’s been a lot of fun, and I’m looking forward to putting these girls in the best position to succeed.”

The Cardinals have several building blocks with the return of a number of key starters, including district offensive player of the year Anneliese Switzer. “Anneliese is a junior who is already off to a dominating start. She’s going to be a real force for us this season,” said Tomlinson.

On defense, the Cardinals bring back district defensive player of the year Hadley Wormser. “Hadley and Grace Ritchie are our center backs. They’re constantly communicating and play really well together,” said Tomlinson.

In addition, the Cardinals’ outstanding junior class includes standout midfielder Brenda Castro. “Brenda is what I’d call a very spicy type of player,” said Tomlinson. “She makes things happen and isn’t afraid to be aggressive and cause chaos for other teams. Overall, we have an extremely competitive group of girls. They want the best for the team and are constantly working to reach their potential.” 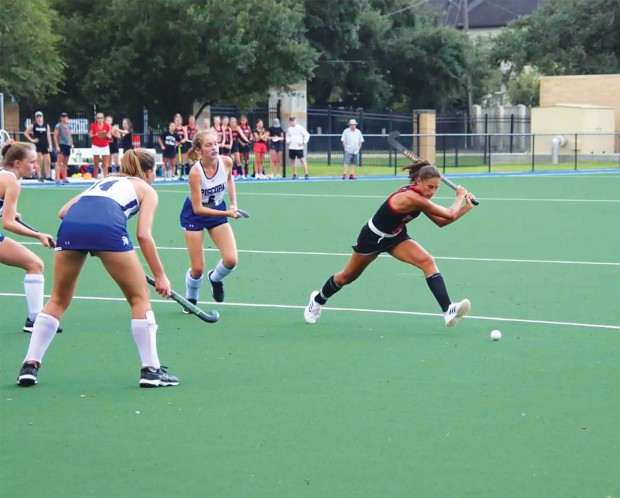 ALL-AMERICAN TEAM St. John’s senior Sloan Davidson was one of only 16 players nationwide to be named a first team All-American by the National Field Hockey Coaches Association. Sloan is also the only player from Texas to earn a spot on the prestigious All-American team.

St. John’s Mavericks senior field hockey player Sloan Davidson has been honored as a first-team All-American. The prestigious award was bestowed on only 16 players in the country by the National Field Hockey Coaches Association (NFHCA).

Davidson is also the only first-team All-American selection from Texas, and she was named to the 2021 High School Western USA All-Region Team. “It’s a huge honor for Sloan and also our field hockey program here at St. John’s,” said Mavericks field hockey coach Rebecca Elliott. “It shows that we take our hockey seriously, work hard, play great hockey, and have very talented athletes not only at St. John’s but in all of Texas.”

In a sensational senior season, Davidson, who will play collegiately at the University of Virginia, scored 45 goals with 19 assists. “That’s really incredible,” said Elliott. “It amounts to what some entire teams score all season, and we’re talking about just one player. Sloan’s skills are really beautiful. She just does amazing things on the field, and it’s just fun to watch Sloan play. In addition, she works tirelessly with amazing dedication and intensity. It’s a truly well-deserved honor. I can’t wait to see her play at the next level.”