After almost two years of a pandemic-directed theatre program, we finally unmasked our curtains to a full audience - Memorial Theatre: Here We Go Again. This production offered a first to many - a professional band, a remarkable cast of understudies, and a student production team. Taking a chance on a new role as Student Director, my eyes were opened to an entirely new light behind the scenes. I truly felt tied to the production in all respects because I didn’t simply play a role on the stage, but offstage as well.

Embedded in the tiring hours of after-school rehearsals and lunch breaks spent transforming our auditorium into a perfect Mediterranean getaway was such a rewarding gift, parallel to the raving reviews we received every night. We were fortunate enough to share a story adored by each audience member, whether they grew up with ABBA or happened to hear a remix on TikTok…the familiarity of Mamma Mia definitely roped people in but I’d like to think it was our talent that convinced the crowd to stay after intermission. Behind the scenes of our vibrant stage filled with dancing queens was an army of quick-changers and set transitions that orchestrated our show each night from beginning to end. This production had especially large flippers to fill costume-wise. One of our costume heads, senior Morgan Stetzer, was “super excited about this show and tried to connect with people more than previous years."

The challenge of capturing the 2008 film while adding our own spin on this jukebox classic was no small feat. Every sequin on the dynamos’ flared pants to every badge on the hotel workers’ vests served its purpose: “The most difficult thing was keeping track of small details, like what accessories people were wearing at certain times and the order of when each person wore their costumes,” said Morgan. For someone who is on her way to begin a new chapter of her life in college, she resonates with the character Sophie because “she just figured out who she was and started living her life the way she wanted to.”

Speaking of new beginnings, Mamma Mia offered sophomore Crawford Freedman his theatrical debut as one of Sophie’s possible dads - although anyone with common sense would realize there’s no debate - Bill. Leaving his basketball career in the dust, Crawford admits that “it was pretty nerve wracking at first. When you go from playing sports in high school to then taking a 180 and start dancing and singing on stage. The only continuity was that I embarrassed myself in both areas.”

Despite completely switching gears, Crawford effortlessly fell into the role as a happy-go-lucky, carefree guy, very similar to the character he portrayed. The ability to express our roles as we wished and allow ourselves to grow gave him the strength to “confront many fears and insecurities. You owe it to yourself and those who came before you to dare to try. The power that comes from going on stage in front of strangers and having no clue how to dance, nonetheless never actually knowing what the dances were, but still doing it and enjoying it is invigorating. If you can’t tell already, I kept it strictly professional.”

It's rare that you find lyrics you enjoy dancing and singing along to so much that it also teaches you the magic of youth, the sheer chaos of romance, and that the power of friendship is endless. Watching every actor, set designer, lighting head, costumer, stage manager, etc. (the list could go on forever) put their heart and soul into two months of ABBA fever was priceless. The bonds formed offstage only strengthened the relationships written in the script into so much more than a 20-year-old bride marching to the beat of her own disco.

Amidst a surprise attack from Omicron and a sudden show cancellation due to our ever-so-unpredictable Houston weather, we were blessed to tell the same story seven different times each perfected with a glittery finish. For a child who thought she was a dancing queen performing for only the company of her stuffed animals, the opportunity to be young and sweet, only seventeen for a live audience, will forever be unforgettable. I think I speak for the entire cast and crew when I say to ABBA: thank you for the music, for bringing it to me. 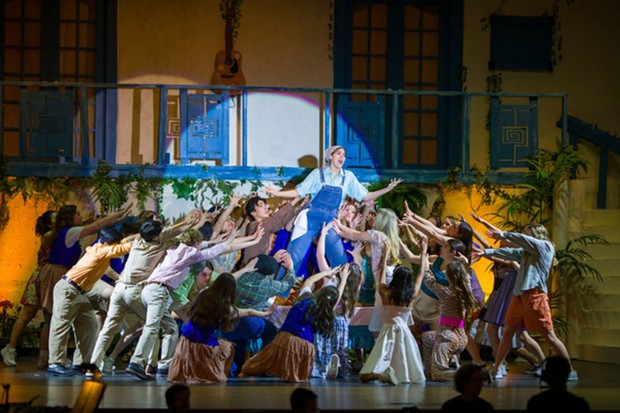 The cast of Mamma Mia in awe of Ava Reistroffer (Donna) while she performs “Money, Money, Money” 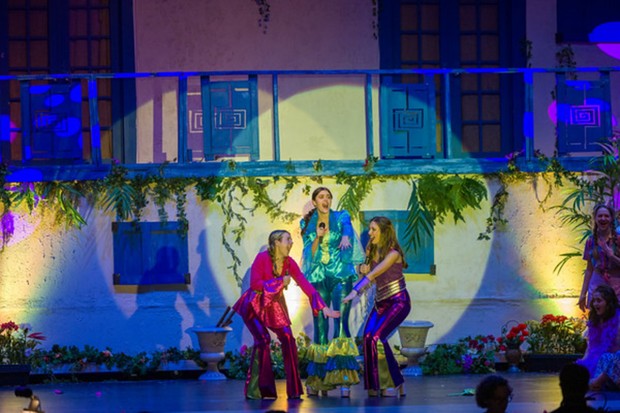 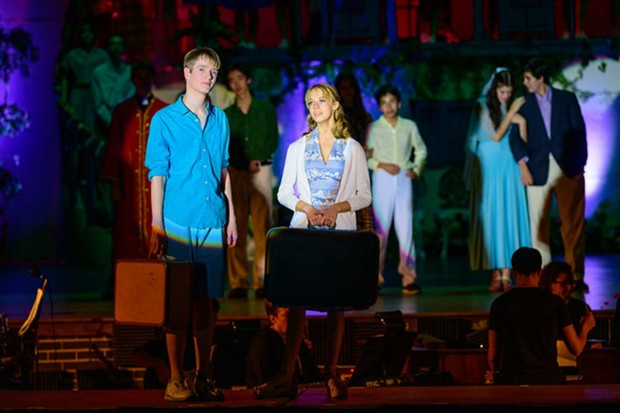 Ethan Pudwill (Sky) and Ella Davison (Sophie) ready to take on a future of adventure. 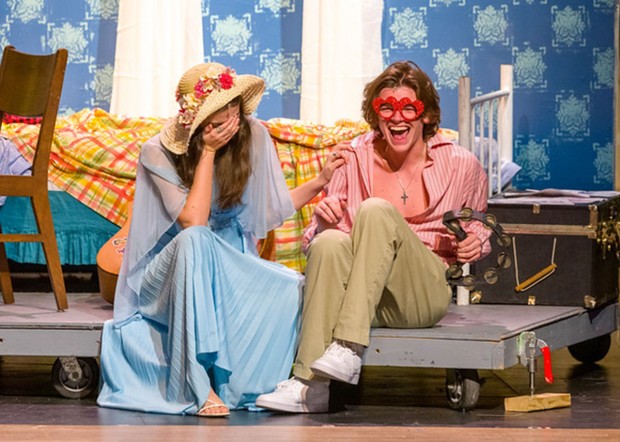 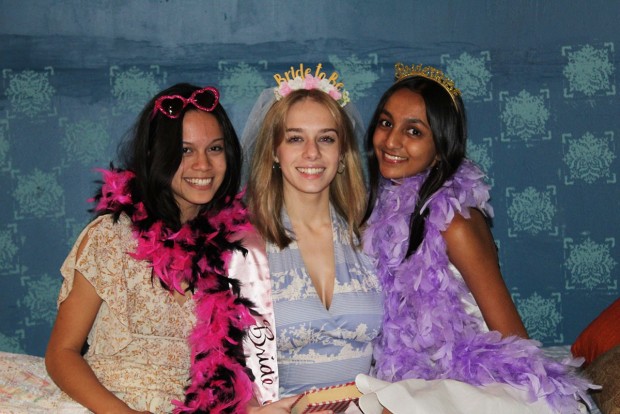 The cast of Mamma Mia during bows on closing night. 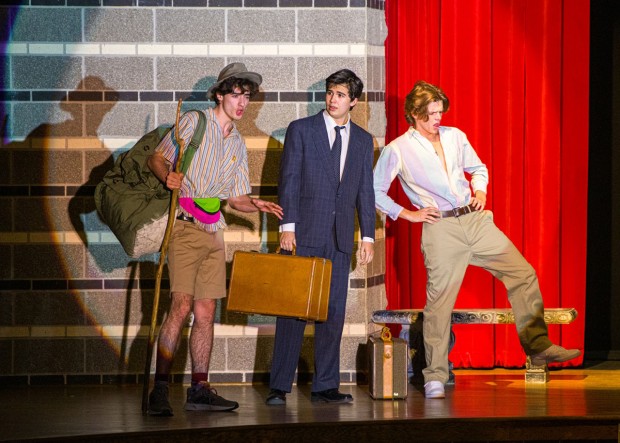 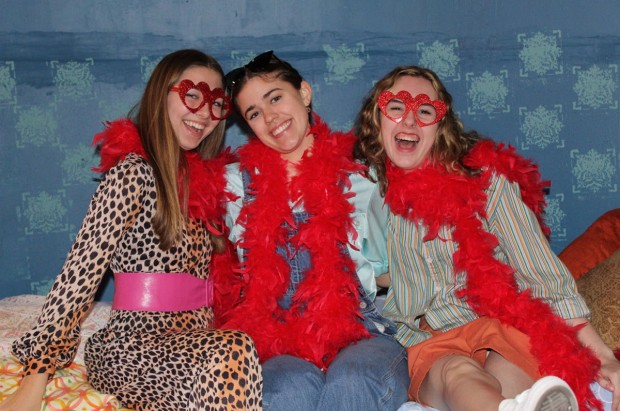 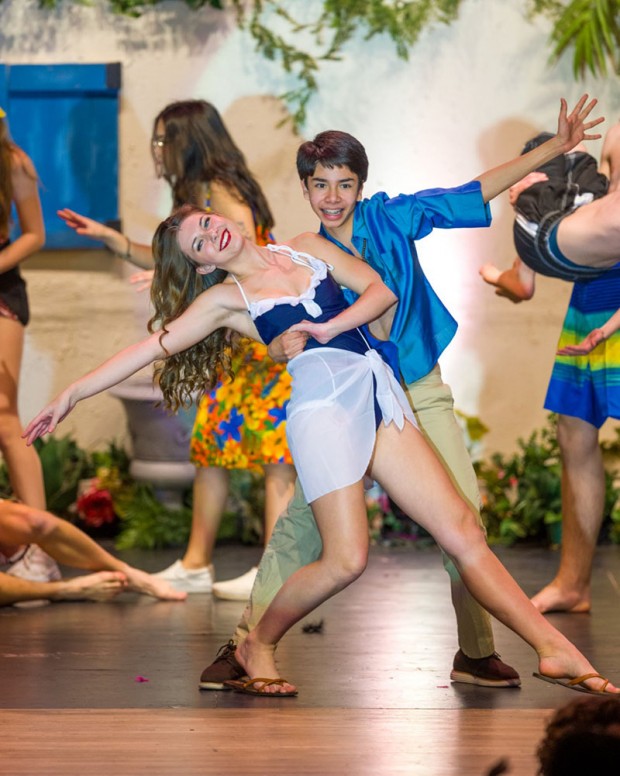 Katie Van Arsdel (Tanya) and Diego Torres during “Does Your Mother Know.” 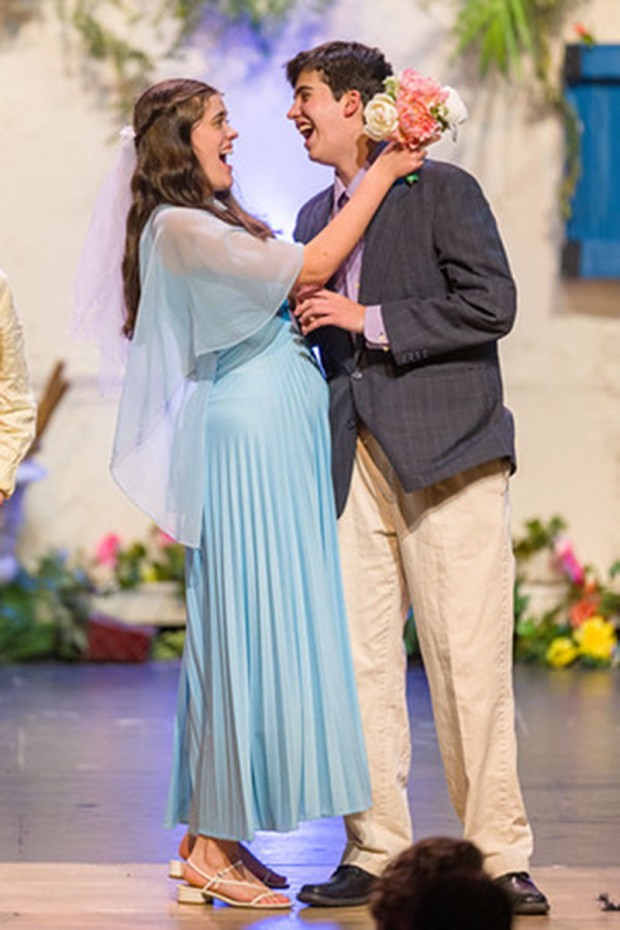