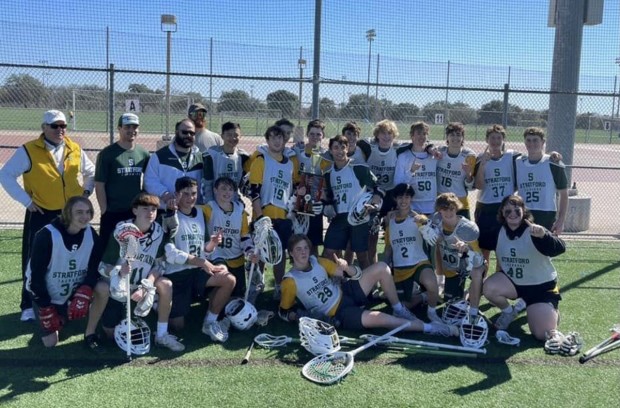 The Stratford varsity lacrosse team is off to a great start this season with a recent win at the Texas A&M Aggieland Classic Tournament in College Station. The Spartans went undefeated in tournament play, including victories against Langham Creek in the semi-finals and Magnolia in the championship game.

When asked about their success, Head Coach Ben Janes points to the team’s 10 senior players (6 of whom are 3 or 4-year varsity lettermen). Janes says, “These seniors have been through a lot in their four years and have had to battle for all their achievements.”

Coach Janes has served as the head coach at Stratford for seven years and is assisted by coaches Curt Jones, Stu Graham, Matt First, and Davis Beasley. All five coaches are Stratford graduates who fondly remember their time playing and/or coaching sports in the Spring Branch Memorial Sports Association and playing football at Stratford as varsity lettermen.

The Spartans are led by a unique group of coaches who are fully committed to the lacrosse program at Stratford because they were once Spartan athletes themselves. Janes says, “We coach out of our love for this community, and the impact that youth and high school sports had on our lives.”

As a club sport not sanctioned by UIL like football or other traditional sports, the lacrosse team and coaches operate outside the normal school day. Even so, the team members still practice or play 4-5 days a week, routinely watch film and work out together, and compete for a state championship against other programs all over the state, just like UIL programs.

The captains of this year’s team are Duncan Fry, Teddy Rutt, Michael Whitaker, and Charlie Baird. Coach Janes says, “Our captains have the privilege to serve their teammates every day, and set the example of what focus, effort, and accountability looks like. Their success on the field is apparent, but more than that, they are young men of character.”

Coach Janes sums it up by quoting Proverbs 27:17 from the Bible which says, “As iron sharpens iron, so one man sharpens another.” Janes says, “This is what we strive for every time we touch the field. It is my pleasure to watch these boys grow into young men of accountability.”

Captain Charlie Baird appreciates the coaches’ commitment to the players being accountable to one another on and off the field. He knows the goal is for the team members to better themselves and thereby, better serve their teammates.

Captain Duncan Fry looks back on his four years on varsity and enjoys how this team has bonded. Duncan concludes, “We are really close, and we all want to win.”