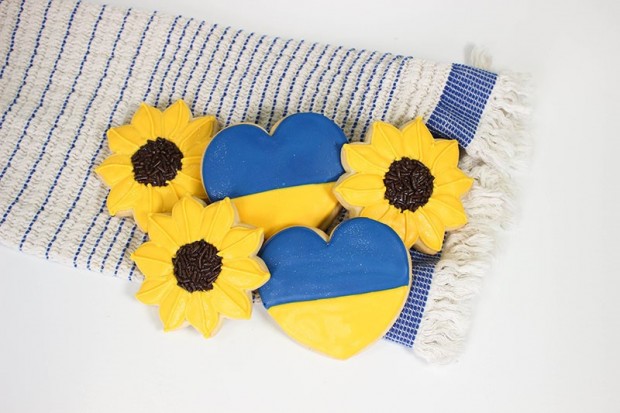 Dessert Gallery will donate 100 percent of proceeds from the sales of their Ukrainian-themed cookies, pictured here. (Photo: courtesy of Dessert Gallery)

Houston has long been called an international city. It’s a deserving title for one of the most diverse cities in the United States in terms of food, culture, and ethnic/racial backgrounds. We’ve seen this global mindset in Houston businesses’ response to the crisis in Ukraine. Many have been touched by the plight of Ukrainian citizens, particularly those who are relatively recent immigrants themselves - fleeing from conflict, persecution, or lack of opportunity in their homelands. Here’s a list of restaurants and organizations in Houston that are making a special effort to lend our neighbors in Ukraine a helping hand in an incredibly difficult time.

Berryhill
The Mexican restaurant will donate a portion of its Baja-style fish tacos sales to the National Bank of Ukraine's fund for the Ukraine Armed Forces.

Bludorn
On Thursday, March 17, Chef Aaron Bludorn of Bludorn Restaurant collaborated with Chef Junior Borges of Meridian in Dallas and the Texas Food and Wine Alliance to host a four-course dinner benefiting World Central Kitchen. The dinner was sold out, with 190 attendees, and raised $11,500. Bludorn plans to continue raising funds for World Central Kitchen—if you are dining at the eponymous Bludorn, look for the donation line on their checks. Proceeds will go to World Central Kitchen’s aid in Ukraine.

Dessert Gallery
The bakery is donating 100 percent of proceeds from their Ukrainian themed butter cookies ($4.75/each) to nonprofit World Central Kitchen. The designs include a heart-shaped cookie with the colors of the Ukrainian flag (blue and yellow) and a sunflower-shaped cookie to honor Ukraine’s national flower, which has become a symbol of the Ukrainian resistance.

Kenny & Ziggy’s
This Jewish deli is one of the many eateries in Houston founded by immigrants (Ziggy’s grandfather was from Hungary, which shares a border with Ukraine). They will be donating a portion of the proceeds from every order of Ukrainian meatballs—$4 from each entrée portion ($23.95) and $2 from each appetizer portion ($13.95) to Razom for Ukraine.

Lucille’s
Chris Williams, chef and co-owner of Southern restaurant Lucille’s, has a personal connection to Ukraine. The chef spent 2015-2019 working as a “cultural culinary ambassador” for the US State Department in Kyiv, Ukraine. Lucille’s Hospitality Group has already donated $10,000 and plans to donate a portion of profits each week to CARE and the Ukrainian Bank. He plans to continue to donate profits regardless of what happens, saying there is “no end in sight” for the fundraiser as Ukraine will need help rebuilding.

Pier 6 Seafood & Oyster House
This seafood eatery will donate 100 percent of profits from their special Kyiv Cocktail ($10) made with Blue Chair Rum, peach schnapps, Blue Curaçao, and pineapple juice. The proceeds will be donated to World Central Kitchen.

Rustika Café and Bakery
The founders of this family-owned café and bakery are Jewish-Mexican immigrants who were particularly touched by the plight of those in Ukraine. All four Rustika locations will raise money for the International Rescue Committee through their dessert happy hour menu, served Monday through Saturday from 2 p.m. to closing. This menu includes coffee and tea for $3, their cookies for $2-3, and slices of cake for $7. This fundraiser runs until March 31.

Snooze, an A.M. Eatery
Until Wednesday, March 23, all locations of Snooze A.M. are donating 100 percent of profits from “Pancake of the Week” sales to World Central Kitchen. The Pancake of the Week this week is Chocolate Pretzel! 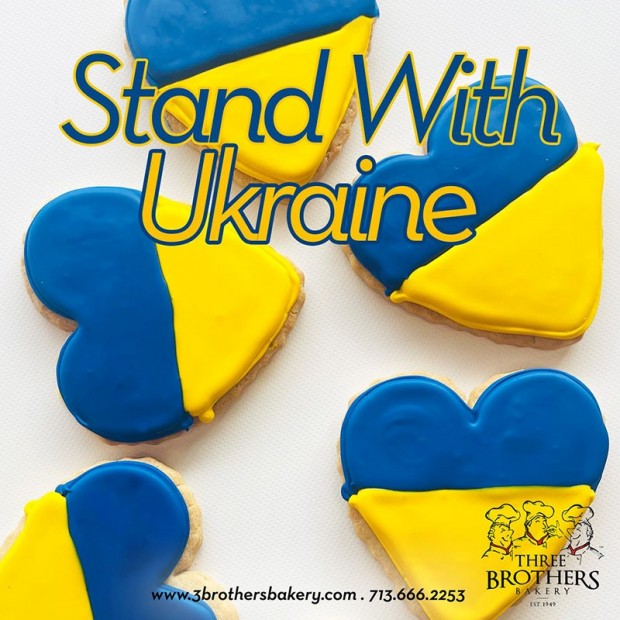 Three Brothers Bakery
This family bakery was founded by Jewish immigrants from Poland, where many Ukrainians have taken refuge amidst the recent conflict. The bakery’s history page notes how their ancestors were liberated from concentration camps and came to Houston to open their bakery. All three locations are selling sugar cookies decorated with the Ukraine flag colors. They will donate $2.50 of each cookie sold ($4.99) to a fundraiser organized by the Jewish Federation of Greater Houston for Ukrainian relief efforts. Three Brothers will also ship a dozen cookies for $79.88; $30 of that will be donated.

Other local foundations and businesses:

Help Rivne
Emma Ruthenbeck and her husband Oleg live in Houston, but still have family in Ukraine, some of whom are currently fighting to defend the city of Rivne. They have been raising funds to send to those in Ukraine through their newly started organization Help Rivne. Charles Luu of local Bellaire store Big Frog Custom T-Shirts and More assisted by discounting T-shirts for them to use as a fundraiser incentive. Charles sympathizes with the plight of the Ukrainian people as a war refugee himself, who arrived in the U.S. in 1979 after he and his family were persecuted for being ethnic Chinese during the Vietnam War. See the @helprivne Instagram page to donate to Emma and Oleg’s fundraiser—if you donate $30 or more, you get a t-shirt!

HTX4Ukraine
Local organization HTX4Ukraine is collecting donations of medical and non-lethal military aid for Ukraine. They have created an Amazon wishlist of items which can be dropped off at Mooncat Lashes & Brows (807 W Gray St, Houston TX 77019). They request that you call before dropping off any donations (713-566-0086).

The Pokrova Ukrainian Catholic Church
The Pokrova Church (9102 Meadowshire St.) has a list of recommended foundations on their website.

The Russian Cultural Center
The Russian Cultural Center held an art auction on Sunday, March 13 to raise funds for the Ukrainian people, and all works were sold. After that success, they decided to continue the auction for another week until March 20. The auction is over, but some pieces are still available; stop by the Center (2337 Bissonnet St., Houston, TX 77005) if you’re interested in purchasing a piece. They are open Monday through Friday from 10 a.m.-3 p.m. The Center also has an upcoming exhibit on how freedom of speech and expression are under attack in Russia.