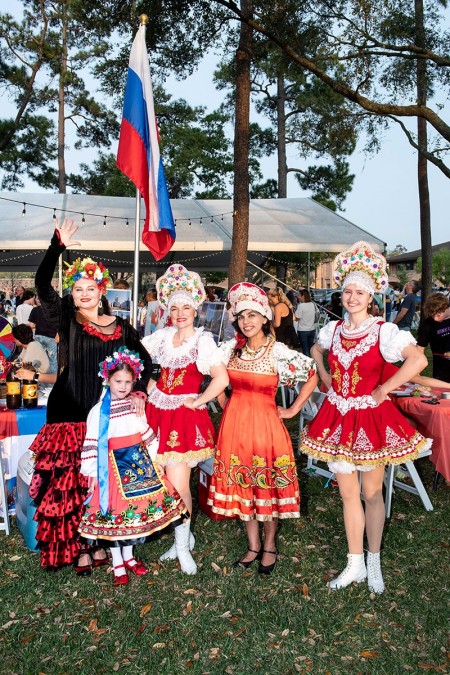 The Miles family organized the Russia booth. This year, there was a special dance performance!

On April 5, Kinkaid celebrated Culture Fest after a two-year hiatus due to the Covid-19 pandemic. Culture Fest is an annual celebration showcasing various countries from around the world. Every year there is a new theme; this year’s theme highlighted global warming and the countries most vulnerable to the effects of climate change. Culture Fest is set up on the Falcon Green and features booths representing different countries and cultures relevant to that year's theme.

I very much enjoyed this year's theme of climate change, as it allowed for really any country to be represented as climate change affects all. Booths have information and posters on display about the country's culture, and each booth brings some sort of culturally relevant food or snack of whatever country they represent.

This was Kinkaid’s new head of school Jonathan Eades' first Culture Fest. Mr. Eades was impressed by the student leadership of the event, the organization, and the attendance at Culture Fest. Mr. Eades had the opportunity to serve as a judge for the best booth and says, though all were great, he particularly enjoyed the Costa Rican, Japanese, and Nigerian booths.

Mr. Eades described the Culture Fest as “one of the best moments of positive community engagement, inclusion, and celebration I've experienced in my two years at Kinkaid.”

Along with Mr. Eades, Mrs. Angela Wainright gave me some great insight into her experience at Culture Fest as an AP World History teacher.

“Culture Fest is about celebrating heritage and sharing it with others,” said Mrs. Wainright. “It is a time when we get to appreciate and truly learn more about the world and the members of our community during a schoolwide, festive event.”

As a world history teacher Culture Fest is one of Mrs. Wainright’s favorite community events.

“Culture Fest is like taking a field trip around the world. I love how open students and families are about trying new cuisines and learning new things,” says Mrs. Wainright.

The Kinkaid community is so glad to have the tradition of Culture Fest back and looks forward to many more years of the multi-cultural celebration and festivities at Culture Fest.