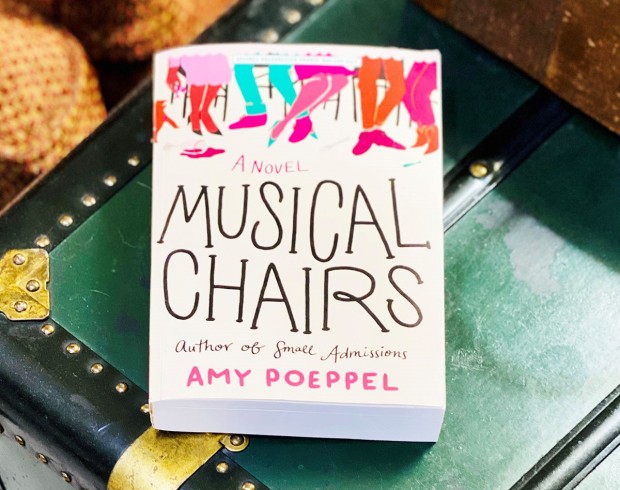 Musical Chairs by Amy Poeppel is a great title for book clubs because there's a lot to unpack in the story.

I love participating in the two books clubs that I belong to – chatting about books, seeing friends, and learning about new books are just some of my favorite aspects of belonging to both groups.

Some book clubs have very set ways that the group selects what to read while others find selecting a book to discuss a difficult task. Recently, Elizabeth Barnhill of Fabled Bookshop and Café in Waco, Texas and I chatted about 24 titles that make great book club picks (a full two years of titles for those groups that meet monthly). We selected a wide range of books that have enough depth to foster deep discussions and will have members thinking about the books long after the group finished reading them.

Dragonfly by Leila Meacham - Leila Meacham’s incredible World War II saga chronicles a fictional team of young Americans recruited as OSS agents to infiltrate Nazi-occupied Paris. The team is code-named Dragonfly, and upon arrival in Paris, the group disperses and sets about to fulfill their unique missions while also pursuing their own individual agendas. The genius of Dragonfly is Meacham’s ability to vividly portray German-occupied Paris and the treachery that constantly existed for those working to thwart Hitler and the Nazis. Her novel frequently proves the maxim “the best laid plans of mice and men often go awry” as each agent must quickly and intelligently adjust to the challenges and unexpected issues that regularly arise. Clever, suspenseful and character-driven, Dragonfly is a tour-de-force and a fabulous addition to this genre.

The High House by Jessie Greengrass – The High House, a new addition to the expanding genre of climate fiction, is an unsettling, character-driven story. Francesca, a famous environmental scientist/activist, is preparing for the widespread disaster that will be coming due to climate change. Frustrated by a world that refuses to act, she begins to secretly prepare a house she inherited in the country for her son Pauly and stepdaughter Caro to retreat to once the rising tides arrive. When a cataclysmic disaster wipes out portions of the country, Pauly and Caro head to the High House to escape and meet the two caretakers, Sally and Grandy, individuals Francesca hired to look out for her children. The two pairs learn to live together in the wake of tragedy, dwindling supplies and an uncertain future. The High House is a quietly powerful novel that will stay with me for a long time.

Land of Big Numbers by Te-Ping Chen – Land of Big Numbers is a collection of short stories set in modern-day China depicting its history, politics, culture and people. The stories combine razor-sharp commentary on life in a country governed by a Communist regime combined with elements of satirical magical realism, and the effect is almost always superb and at times surreal. Two of my favorite stories in the collection are “Gubeikou Spirit” which follows a group of citizens who end up stranded for months on a subway platform, kept there by the station’s guards and “Flying Machine” which tells the story of an elderly man who against all odds keeps trying to build an airplane out of items he accumulates. Te-Ping’s inspiration for the stories comes from her years spent as a Wall Street Journal correspondent living in Beijing, and these thought-provoking stories have stayed with me, I frequently find myself reflecting on them as I go about my day.

Musical Chairs by Amy Poeppel – Bridget and Will’s decades-long relationship seems perfect - except it is platonic, to the amusement and confusion of their friends. The chamber group they formed as students, the Forsyth Trio, is now struggling and without a violinist. Bridget was hoping for a perfect summer with her boyfriend Sterling, but her plans are dashed when he breaks up with her and her twins (who are in their twenties) show up unexpectedly, bringing all of their own drama with them. To top it all off, her father announces that he is getting married. Hoping to kill two birds with one stone, Bridget comes up with a plan to host the wedding that will hopefully also bring attention back to the Forsyth Trio. However, for that to work, she and Will need to recruit Gavin, their old violinist, to come back to the trio. Poeppel’s signature wit and insight into family dynamics will delight and entertain readers.

Want to hear about the rest? You can listen to the full episode. What books really resonated with your book club? Feel free to drop them in the comments below.