Making a difference in Tanzania 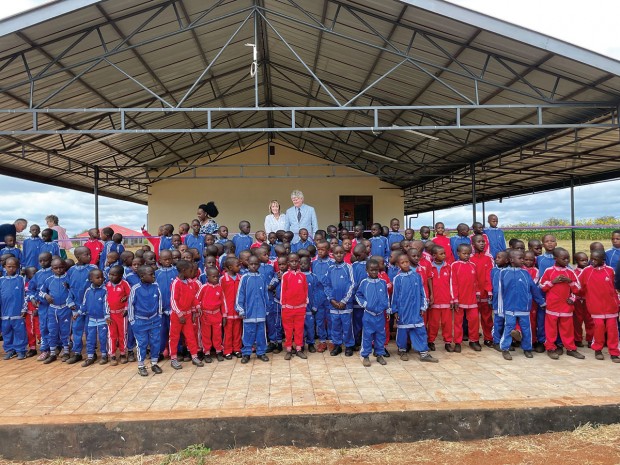 INAUGURATING A DREAM Sandy and Richard Jackson on the patio of the library and media center they founded at Promise Village School in Tanzania, surrounded by some of the Maasai children who will be making use of it.

When Dr. Richard Jackson was diagnosed with pancreatic cancer in 2020, he knew he wanted to use the time he had left to make a difference in the world. He and his wife Sandy had gone to Tanzania on safari in 2006, and they left that country grateful for the natural and cultural marvels they had experienced but haunted by the poverty and deprivation that they saw.

When the cancer diagnosis sharpened his focus on leaving a legacy, his mind went back to Tanzania, to an educational project he had collaborated with some years before. Years ago, a friend had put him in touch with a woman named Donna Gunn, from Austin, Texas, who had started a nonprofit called Africa’s Promise Village aimed at improving the lives of children in the indigenous Maasai territory of the Manyara District in Tanzania. She was looking for help to ship some school uniforms for the village’s school. Richard was impressed with what the organization was doing and happily helped with that, but he wanted to do more.

The retired medical doctor had already founded his own non-profit in 2010, Mali Nieta, which translates to “looking ahead to the future,” focused on helping in education and health-related issues throughout Africa. Now he decided to join forces with Donna and help amplify her efforts to provide a better education to the Maasai children.

“When I came down with cancer in 2020, I wanted to do something big – I wanted to build a library for the school,” he said. And so Promise Village Academy was born as a project of the two respective nonprofits. 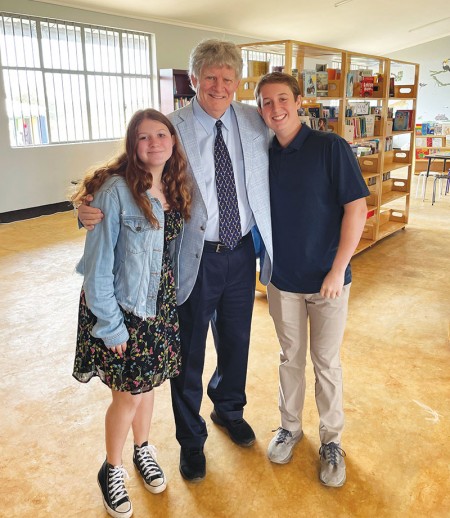 REFLECTING Richard Jackson (center) takes a moment inside the library they have just helped to inaugurate, with grandchildren Shayley (left) and Jackson (right), whom he hopes will be inspired to use their talents to likewise make a difference in the world.

For grandson Jackson Kane, 16, his grandfather’s cancer diagnosis came as a shock. “We’re very close, and I’ve been traveling with him since Day 1,” said Jackson. Richard and Sandy had opened the doors of the world to him and to sister Shayley, 13. They had taken the kids to Mexico and to Costa Rica, and for Jackson’s 12th birthday, he got to choose the destination – he chose Switzerland, because he loves hiking in the mountains.

His grandfather’s cancer took a toll, especially during Covid. “It was really hard for a while, seeing him lose his hair, no energy, not being able to see him because of Covid – just doing Zoom calls, and he had to leave early because he didn’t even have enough energy to talk.”

But then, thanks to an excellent medical team and a determined spirit – and perhaps a miracle – Richard’s cancer went into remission. In October 2021, a scan showed no trace of the cancer.

As he put his mind to the task of building a library for the village, Richard tapped into the Caring Bridge network – a social network for people with cancer and their families. “I had 170 to 180 people following me,” he said. He was able to tap the network to raise the money to buy books, and the solar panels necessary to power the donated computers. Ultimately, he was able to raise the money to buy 7,000 books for the library and procure 20 computers for the media center, powering the computers with solar cells and providing a satellite internet connection to the remote village.

The library building was started in December of 2020 and was finished in August of 2021. It was designed by Houston architects Keith and Harry Gendel.

And so it was that in June, at the close of the academic year, Richard and Sandy took the whole family to Tanzania to celebrate the library’s official inauguration. And then, since they would be in the middle of the Manyara Region south of Arusha, the family would go on safari. 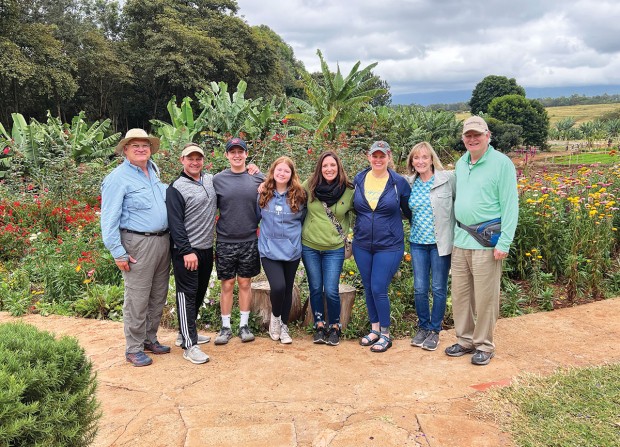 Jackson was enchanted with the idea of going to Tanzania. “It’s the best trip I’ve ever been on,” he said. “Seeing all the animals in person, seeing the different cultures, going to the library, meeting the kids – it was all just amazing.”

Richard and Sandy invited both of their daughters, Emily Jackson and Tracey Kane, and Tracey’s husband Eddie Kane, and their two children, Jackson and Shayley. They also invited their longtime friend Gerald Merfish, an important supporter of the Promise Village Academy.

For Sandy, the trip was a real eye-opener, especially compared with the 2006 safari with her husband and some friends. She had seen some people of the Maasai ethnic group, but it was mainly in a tourism context, observing dances and handicrafts, but there was little interaction.

“The first time was more touristy,” she said. “This time we saw more of the real Tanzania.”

The library’s grand opening was June 7, and the family was all there. A number of local government people turned out for the event, and the district commissioner oversaw the proceedings.

“We expected him to show up around 10 or 10:30,” said Richard, with some amusement. “He was two hours late, which is apparently common for Africa time.”

The commissioner’s tardiness, however, was not an indication of his lack of interest. “He was so surprised at the quality of the classrooms, the books, the happy children,” said Richard. “When we took him to the library, he was so very surprised he didn’t realize what these people had – he spent 20 minutes telling them in Swahili, their native language, that he hadn’t seen this anywhere else in his district, that they had something that was so unbelievable that he hopes they will send their children to school knowing it would be very, very beneficial to them.

“He said you’ve just done a wonderful job here and I’d like to bring more government people to see what you are doing.”

Tanzania offers a universal free education to all children, but the quality of that education is severely impaired by lack of funding. Students and teachers in the public schools commonly deal with class sizes of 60 to 80 children, and there are often only four or five textbooks for the whole class.

“The children are expected to take a test in English after fourth and seventh grade, and if they don’t pass, their education is over,” said Richard. “The professor speaks in English, and most children are at a disadvantage.”

Richard was delighted with the success of the library project, but he realized he had only begun to make a dent in the need that pervades the area. Most children throughout the region don’t have access to the school because there are no buses, and even if there were, the roads are terrible, especially during the rainy season, when they become impassible to anything but Land Rovers or something similar. The children are walking from one to five miles a day to reach the school, through the wilderness of Tanzania, sometimes among the same giraffes, cape buffaloes, wildebeests, and lions that the tourists come to observe from the safety of their Land Rovers. 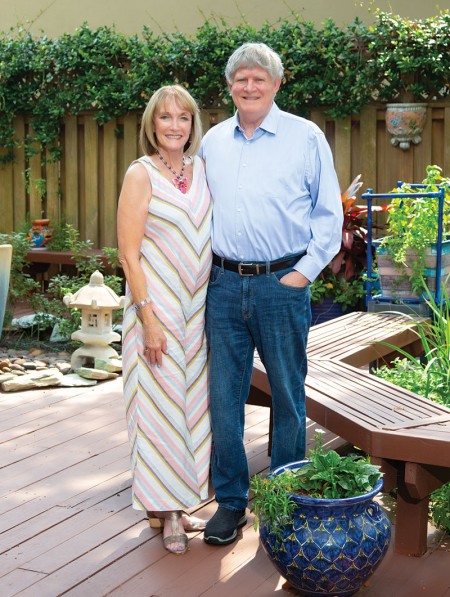 MAKING A DIFFERENCE Sandy and Richard Jackson at their Bellaire home, the base from which they’ve launched many an adventure. It's also the home of Mali Nieta, the nonprofit that Richard formed to support education and health initiatives throughout Africa. (Photo: lawellphoto.com)

So, Richard has already set his sights on the next project: to build a dormitory and more teacher housing, hopefully early next year. “And when that happens, we’ll be boarding children to allow them more school time, and we’ll fence the whole area so as to make it safe for them – it will be a wonderful oasis in the middle of absolutely nowhere.” His nonprofit is also working on a project with Procter & Gamble to donate thousands of packets of the company’s water purification product, to clarify the community’s muddy, contaminated water for drinking.

After the library’s dedication ceremony, the family was ready to climb into some Land Rovers and see some of those animals for themselves, so they headed on safari to Ngorongoro Crater, Tarangire National Park, and Lake Manyara, home to huge herds that graze the lush grasses.

Gerald gave Jackson his camera. Jackson was entranced with the ability to zoom in and take pictures. They were able to see zebras and giraffes, cape buffalo and wildebeests, even a leopard in a tree and a lion tearing into a large animal.

“You see them on TV and it’s awesome because they are so beautiful,” said Jackson. “But you see them in person and they are just majestic.”

Richard had hoped to make an impact, and he clearly did – not only on the Maasai, but on his own grandchildren.

“I can just describe it as the most impactful experience of my life, so far – the best trip I could have had, and the best experience all around,” said Jackson. “It kind of opened me up to the other parts of the world and to other cultures, and made me feel grateful for my life and how I’m able to have all these things and have a great life. I would love to help just like my grandfather did later in my life.”

As for Richard, the project has been the best medicine he could have.

“To me, it really solidified my resolve to try and help people, and I just picked this part of the world to work in,” he said, smiling. “It makes my heart glad; it’s heart healthy. And it makes my retirement meaningful.”

Editor's note: Richard Jackson was also featured in this story on the Civil Rights Trail.