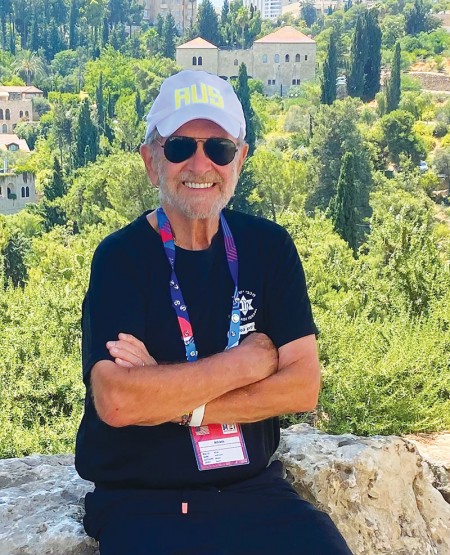 TEAM PLAYER Jack Levin has been playing tennis since his teenage years and recently traveled to Israel as part of the US tennis team in the Maccabi Games.

In Jack Levin’s world, 80 is the new 50. In fact, this 80-year-old CPA is more active than a lot of 50-year-olds. He’s working full-time, playing tennis and padel four times a week (padel is a cross between tennis and squash), and he’s just returned from a trip to Israel, where he was a member of the American tennis team at the Maccabi Games. Jack says it’s all the activity that keeps him young.

“I’ve been hitting balls basically all my life,” Jack says. “My interest started at 12 or 13, in South Africa. As a teenager, I played competitive table tennis, and I drifted to tennis as an adult.” Jack and his wife Leorah moved to Houston 46 years ago and raised four boys here, all grown with families of their own.

“About 20 years ago, I started playing padel. It’s not pickleball, which is all the rage, but it’s a sport [that’s] growing tremendously in Europe, Argentina, Mexico. It’s played on a smaller court, and you play outside, but you’re enclosed in glass on the sides.” Jack’s become a champion of the sport, both on the court and in the backrooms of competitive play.

Jack had already qualified to play tennis in this past summer’s Maccabi Games. Held in Israel, the Maccabi Games brought 10,000 Jewish athletes from 60 countries together to compete in what has been called “the Jewish Olympics.”

But as a padel enthusiast, Jack wanted the newer sport to get the placement he felt it deserved in the Maccabi Games. “In Spain, there are more padel players than tennis players, and that’s the land of [Rafael] Nadal and all those great tennis players,” Jack says of the sport that began in Acapulco in 1969 and has since become popular worldwide. “I pushed to get padel accepted into the [Maccabi] Games as an event, and it was a great success,” Jack says, sharing his excitement about the sport’s first appearance in the Games.

“There were four courts set up, 14 countries entered. I would have liked to play, but there was no age division for me, so I would have been playing against 25-year-olds.” Instead, Jack became the international chair of padel for the Maccabi Games. 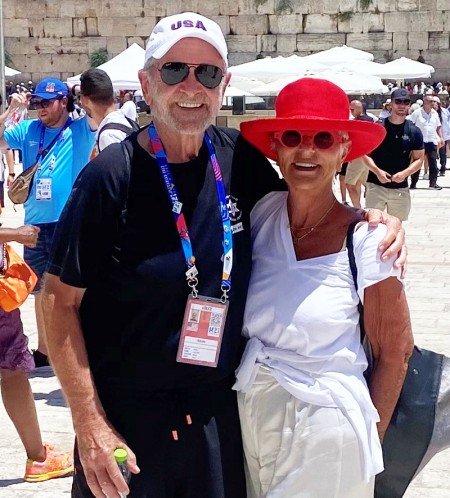 Although Jack Levin was unable to play tennis in the Maccabi Games due to a shoulder injury, Jack and his wife Leorah enjoyed their trip to Israel and meeting other athletes.

Attending the 2022 Maccabi Games both as a member of the tennis team and as the padel chairman was a dream for Jack. “I was really looking forward to it, had always wanted to do it,” he says of playing in the Games (he and Leorah had visited Israel many times before). Sadly, Jack suffered a shoulder injury playing tennis three days before departing for Israel.

“I told him, ‘It’s like the Oscars – you tried out and you made it, even if you didn’t win the outcome you wanted,’” Jack’s daughter-in-law Melissa Rubenstein Levin says. “Your bucket list still gets checked off.” In that spirit and despite not being able to play tennis in the Games, Jack and Leorah had a great trip.

“It was really exciting; President Biden attended the opening ceremony with all the countries marching in to music and fanfare. The activities took place in five cities. We were in Netanya in a hotel, and in our hotel was the US women’s basketball team,” Jack says. “Leorah is beautiful and looked really wonderful, and she and I started talking with these young women, she was regaling them with stories. The girls just took a shine to her, so we would have breakfast together and went out together and watched them play. They got a gold medal and called us onto the court for pictures.” Melissa says Leorah and Jack became the “unofficial parents” for the team.

The people were Jack’s favorite part of the experience. “You make wonderful friendships and connections. We had a wonderful time.”

And the camaraderie is what keeps him playing. “I’ve been playing with the same tennis group for 30 or 40 years,” Jack says of Jorge Barer, Mark Russell, Marc Mattsson, and Don Woo. “Jorge, I met 46 years ago, and we’re still playing together.

“I’ve been blessed by these tremendous friendships. We’ve vacationed together. About four years ago, they all [and their wives] came to South Africa with me and I was the tour guide for Cape Town, where I’m from.”

Like the Olympics, the next Maccabi Games will be held in three years (Covid changed the typical four-year schedule). Jack says he’s looking forward to competing. “By then they will have age divisions [for padel],” he says. “Maybe not 80s, but 40s and 50s, so it won’t be too much of a drop for me.”