Stratford Marching Band takes on “The Game of Life” 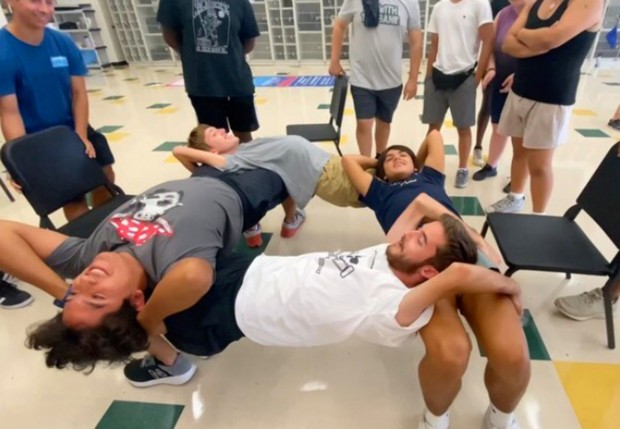 As the award-winning Stratford Marching Band prepares for another amazing year, I sat down with SHS Director of Bands, Christopher Yancey, to discuss what he has planned for the new season.

Director Yancey is excited about this year’s theme based upon the classic board game, “The Game of Life.” To make a larger impact on the audience, the band has employed a group of talented designers to create oversized props that mimic the real game. Yancey says that “we have spent a lot of time and worked really hard making this theme come alive on the field for our fans to enjoy.”

This year the band started practicing July 20. When asked, most band members agree that summer band camp is a great time for members to let loose, have fun, and get to know each other.

During the summer, the band predominantly focuses on the basics. Yancey explains how “most of the new band members coming in from 8th grade have never played an instrument and marched at the same time so we have to focus on getting them up to speed first.” Now that school has started, the band is able to fully engage on learning the songs.

In addition to the songs band members must master for their own performances, they also have to learn an additional six dance tunes for the dance team half-time routines.

Throughout the season, the band will perform roughly 15 times in total, with competitions taking place in October, or what Yancey refers to as “Band-tober.” He adds that “we will compete at least three times, four if we qualify, which I think we should.”

The color guard, band, and dance team are all busily preparing to make the season a coordinated success. The color guard, led by Color Guard Tech, Alexis Gardiner, started practicing and attending camps in early July and looks forward to being an integral part of the show.