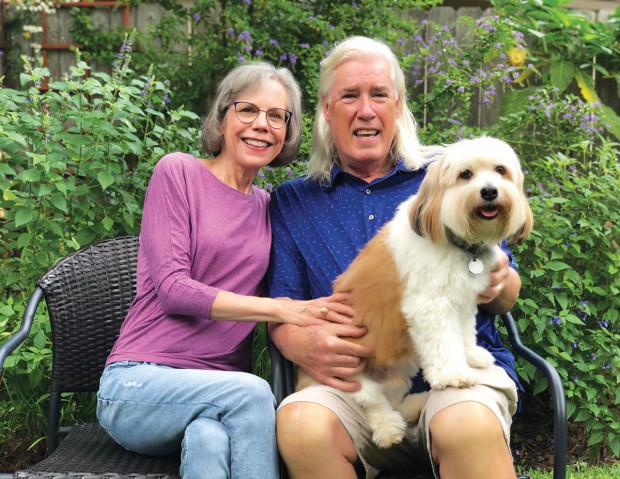 HIS OWN BACKYARD This Harvey rescue has Sarah and Burke Watson completely broken in five years later.

Last month, I (Cindy) told you about a mysteriously exotic breed of dog who landed in my life a month after Harvey. I named him Henry. You would think the owner of a rare Coton du Tuléar worth an average price of $3,000 would surface. But after six months of living with Henry, I knew that despite my attachment, Henry’s high energy and quirky personality was more than I could handle. He needed a bigger yard, and some patient dog whisperer types. He needed Burke and Sarah Watson. Their acceptance would ease the painful parting. Conveniently, Burke, a journalist by trade, has agreed to tell his side of the story. Here’s Burke.

I was sitting in Cindy’s kitchen in February of 2018, where friends had gathered to watch the Super Bowl, when this fluffy little guy with almost human eyes bounced into the room, cheerfully sniffing the forest of legs as he politely greeted everyone. Then he jumped into my lap.

He may have chosen me simply because I looked like an easy mark for snacks, but I loved him immediately. A few weeks later, Cindy suggested that we take Henry home for a weekend to see if he and our dog, Einstein, would get along. Sarah and I had been talking about finding a companion for our 12-year-old Miniature Dachshund. Despite the difference in age, size, and energy levels, they became pals. Sarah and I made the arrangement permanent the following week. As I held him in my lap and Sarah drove us home, Henry got so excited that he threw up.

Henry loved his new home, exploring a backyard that included a large herb garden, broad beds with roses, perennials, and flowering shrubs, and a corner that we’ve kept somewhat wild, with tall cannas and thick vines shaded by a massive pine. When we sat beneath the pergola on our patio, he would effortlessly hop onto my lap and then ricochet onto the table, from which he could monitor his domain and launch himself like a heat-seeking missile if a squirrel dared peek over the fence.

Even as he adapted to his new home, one minor adjustment was needed: We have a grandson named Henry, who lives just a few blocks away. To avoid confusion, Sarah did some research and suggested that Jacques would be a good name for a pooch whose lineage traces back to Madagascar royalty. He soon learned his new name and, with love and patience on our part, gradually let go of some of the demons he had carried from his earlier life.

I noticed one morning, as I swept the breezeway, that Jacques was taking a circular path around me and watching closely. He also became distressed when we first put his harness and leash on him for a walk. Signs of abuse? We’ll never know for sure. All we could do was give him a loving home and help him learn that he no longer had anything to fear. Now the word “walk” sends him dashing for the back door.

Another issue hasn’t entirely disappeared, however: We’ve read that housebreaking is a particular challenge for Cotons, and to that we say, amen. At moments when he became alarmed because someone dared to walk in front of our house, or when Sarah and I went somewhere without him, Jacques expressed his displeasure by leaving a generous puddle somewhere in the house for us to discover in our own good time. Doggy diapers have helped, but Jacques has become skilled at wiggling out of those. The quest goes on.

We became a one-dog family again in March, when Einstein crossed the bridge at age 16. Losing that sweet, fierce little guy has hit us hard – Sarah, especially – and we saw that Jacques was mourning, too. As life has moved on, our intrepid guardian still has his two Yorkie cousins nearby, and he loves his role as my navigator, standing in my lap and watching out the window on our Friday drives to the recycling bins. Sarah and I embrace our roles as well, making sure he wakes up each day to a world where he feels loved and secure.

People frequently compliment Jacques during our walks, and we tell them about his breed and mention that he’s a rescue. I like to imagine, though, that while we humans are talking, Jacques tells their dogs how he met us and how long it took him to get us trained, but that it was worth the effort and he’s glad he rescued us.

Now I wonder if Jacques also tells those dogs about his name change. Perhaps he knew the name Henry needed to be saved for the future Henry Ehrenkranz, Stan-the-Man’s grandson-to-be, due in November to Scott and Katie Ehrenkranz, named after Stan’s beloved father.  Another happy note is that Burke and Sarah have not only provided a happy home to Jacques, but they are still speaking to me five years later.