Their exercise regimen is picking up 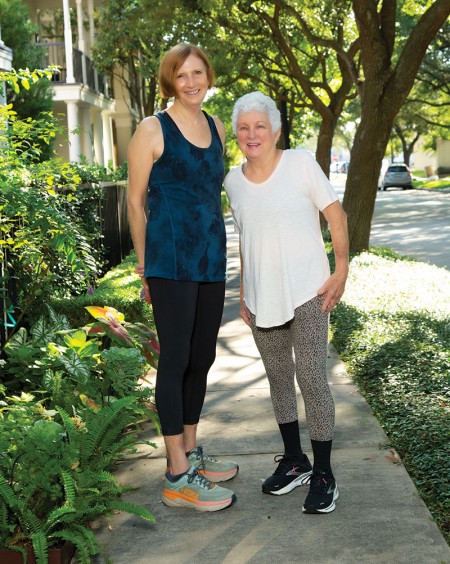 THEY TALK TRASH Pamela Dwyer and Angie Sassard meet every morning to pick up neighborhood debris. Over the years, they’ve kept untold pounds of glass, plastic, and random garbage out of area bayous. (Photo: lawellphoto.com)

The old friends were floating down Buffalo Bayou in a tour boat, trying to enjoy the rare view of downtown Houston. But what made the biggest impression those five years ago, was the plastic garbage bobbing in the water.

That dismal sight, as Pamela Dwyer remembers it, inspired her and Angie Sassard to join the ranks of “ploggers,” an international community of environmentalists who combine regular exercise – walking or jogging – with trash gathering and recycling.

At least that’s one version of the intrepid ploggers’ story.

Sassard thinks they added garbage collecting to their daily exercise routine after they read a story about the trend.

“We started plogging because Pam got so tired of my stories that we had to do something else,” Sassard jokes. “I say, ‘You know what?’ and Pam says, ‘Yes, I already know that story.’ So now we talk trash.” 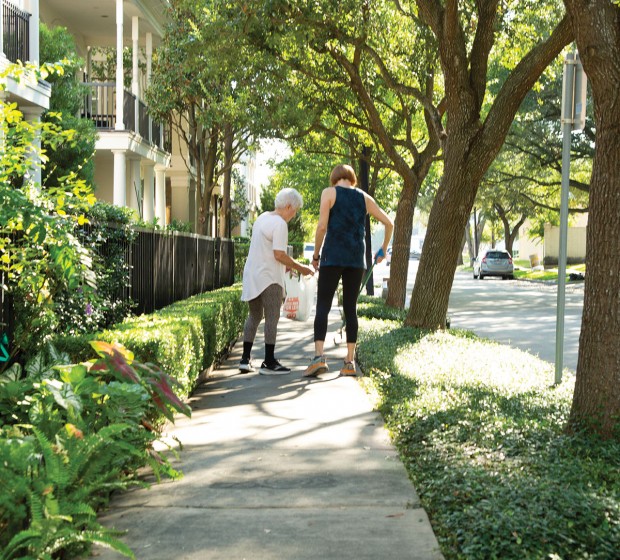 Dwyer is 72. Sassard is 81. They look like action figures when they charge out of their respective houses at 7 a.m., Monday through Friday, rain or shine. This random Tuesday they’re still in their workout clothes – they’ve already been to their respective gyms. Dwyer waves her grabbing tool. Sassard totes recycled trash sacks.

Suddenly Sassard dashes down the street – the octogenarian seems to be chasing a car. When the gentleman behind the wheel eases to a stop, she leans in and gives him a smooch. She and Randy Sassard have been married 57 years.

He is a physician; she is a retired middle school science teacher.

Dwyer is a retired nurse who has fond memories of emergency medicine. For now, she is using her experience to help her significant other recover from shoulder surgery.

“We’re not married,” she says.

Sassard dismisses the not-married thing. What’s important, she says, is her friends have 20 years together and they help each other.

Dwyer and Sassard vary their route from day to day but now they’re striding purposefully down Wroxton, picking up beer cans, discarded lunch wrappers, plastic bags, even Q-tips. Once when they were plogging around Rice University, they discovered a wad of cash and turned it in. They’ve also found clothing, including underwear, and pounds of bottles and plastic, which they recycle.

On Buffalo Speedway Dwyer and Sassed slow down to greet the construction workers finishing the massive street rebuild. They also pause for friendly neighbors and their dogs. But Sassard is particularly looking for Sadie, the tripod or three-legged pooch, who lives on Albans Road.

“She and I shared a similar experience,” Sassard says. “She had cancer and had a back leg, well, maybe it was a front leg, amputated, and I had breast cancer and lost one, so we immediately bonded.”

Sassard carries expensive venison treats that she will share with a few other dogs, but mostly, they’re for Sadie. 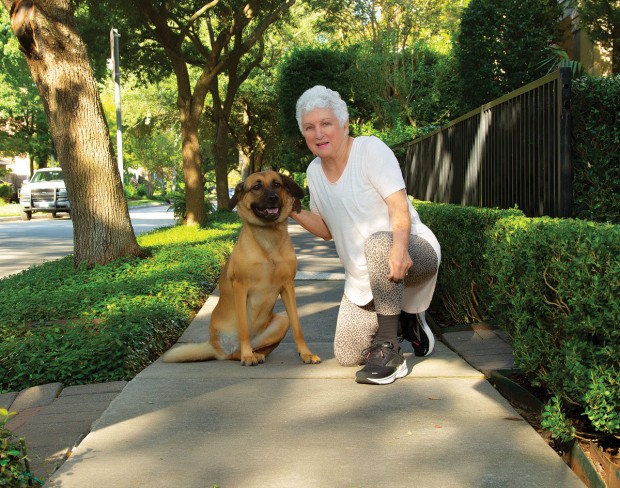 As they work, they keep an eye out for Sadie, their three-legged neighbor. Sassard says she identifies with the dog, as they are both cancer survivors. (Photo: lawellphoto.com)

West University is a city within a city, and it is known for its trees, its security, and its cleanliness. But Dwyer and Sassard just scoff when asked if there is really enough trash to pick up every day. They know all the trash bins, all the public garbage cans on every one of their routes, and they do their part to help fill those receptacles every day. At the halfway point this day, they have filled four sacks of garbage and disposed of them responsibly. While they scan the streets for more trash, they talk.

For example, she vents about significant others who could seem a tad more appreciative for the excellent nursing care they receive.

Sassard vents about impatient drivers and the very occasional neighbor who might question their intentions.

Also, Sassard and her husband enjoy dining out, but Dwyer makes that a smidge complicated because she is a pescatarian. The only thing she will eat that even resembles meat is fish.

“I don’t make a big deal about it,” Dwyer says. “I don’t care if all there is for me to eat is cheese and a salad for dinner. But Angie thinks it’s a pain in the ass.”

Sassard is quiet on that one topic but offers, instead, a precise analysis of her favorite team, the Houston Astros.

“I do think Carlos Correa (the former Astros shortstop who left in search of a fatter contract) was an idiot,” she says. “So now we have this young man named (Jeremy) Peña. He’s already got a good attitude, but he needs to work a little bit on some parts of his hitting.” (Editor’s note: After this September interview, Peña clearly took Sassard’s advice.)

Also, she is excited that the new kid, pitcher Hunter Brown, gets to play on the same team as his hero, veteran and class act Justin Verlander. And she’s happy that third baseman Alex Bregman has settled into his role of husband and father and is, coincidentally, hitting sensationally.

But of all the players on the roster, her very favorite is Jose Altuve.

Such a nice man, she says, and “short like me.”

The hardest part of the route, and also the end, is a strip of businesses on Kirby. By now the rush hour traffic is fierce, and Sassard and Dwyer have to be careful not to get run over. There, in addition to the usual trash, they recover car parts that have been smashed into tiny pieces.

Sometimes, the women say, someone will come out of one of the businesses and offer them water bottles, cups of coffee, or most recently, smoothies.

One man rolled down his window and said the sight of Sassard and Dwyer picking up trash was the sweetest thing he’d ever seen.

“We get a lot of thank yous,” Sassard says, and when one or two people are rude, Dwyer will take care of them.

There was the time, at Sunset and Kirby, that one woman thought they were in her way. “She almost ran us over, and when we asked her to stop, she called us every name in the book,” Sassard says, adding, “When Pam gets mad, her voice goes up about five octaves.”

That time, clearly, Dwyer got mad.

“Most people are nice but some are so rude,” Sassard says.

Sassard does seem a little tired; she’s been up since 4 a.m. In addition to all of her other morning tasks, she’s been cleaning the storm drains to help the neighbors on her block avoid flooding.

“Pam says I have a leaf fetish,” she quips.

She also tells about her cat. She was taking care of the creature for her out-of-town neighbors. Except they never came back.

It’s sort of OK, Sassard says, because her husband really loves the cat.

“It’s work they do quietly,” says neighbor and career coach Tracie Mazzu. “They don’t advertise it. Nevertheless, they have a presence. People notice them. They spread joy in this neighborhood, and they don’t even know it.”

Probably the most famous plogger in the world is author and humorist David Sedaris. He has a garbage truck named after him.

Sassard laughs appreciatively but says she and Dwyer are not looking for their names on the side of a truck.

Editor’s note: For more on the plogging movement, read Going Green: Plogging hits Houston by Tracy L. Barnett, which was published in our October 2018 issue.