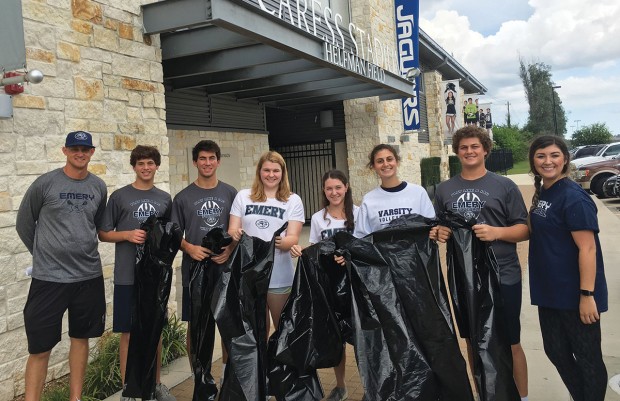 This column is the first in a new series, Going Green, that will tell the stories of Buzz readers who are making the shift to more sustainable lifestyles. If you have an idea for a story, write to us at [email protected].

Never has a movement been more literal. Plogging, it’s called – picking up litter while jogging, a phenomenon that emerged in Sweden in 2016 and began sweeping the world earlier this year. In Houston, the trend is taking on a new level of importance as residents of flood-prone areas are realizing the sometimes painful price of trash-clogged storm sewers.

Cheerleading captain Haley Johnson, a senior at The Emery/Weiner School, first heard about it from her athletic director, Angie Gubitz. Johnson had been flooded out during Hurricane Harvey, as had most of her classmates. So when she learned clogged drains contribute to flooding, and that she could do something about it, she was all for it.

Gubitz was motivated when headmaster Stuart Dow suggested it as a community-service activity for the sports teams. “They kind of looked at me and gave me maybe a similar look to the one I gave to Stuart when he first brought it up,” she said with a laugh. “But as soon as you say anything about Hurricane Harvey or being of service in any way, our kids get behind it.”

Gubitz is encouraging other coaches as well. “It’s an opportunity to do some team bonding and socializing while going out and making this into a community activity. Then maybe some kids will start doing it on their own outside the team; then it kind of catches fire.”

Tamara Sell, the school’s learning support specialist, was the first to join the movement. The Sells, who moved to Houston from the West Coast about five years ago, were surprised at the amount of trash that accumulated in their neighborhood near the River Oaks Shopping Center.

Tamara said the activity fits with the school’s traditional teaching of tikkun olam, meaning “repairing the world.” Now she and husband Mark have incorporated plogging into their workout routine.

“We just enjoying feeling like we’re contributing in some way,” said Tamara. “I just decided – instead of waiting for someone else, I can do this. Why can’t it be me?”

Sara Speer Selber, founder of the Project Management Team, has incorporated trash pickup with her morning exercise since the early days of “Don’t Mess With Texas.” It wasn’t until a friend tagged her on an article that she realized what she had been doing for years had become a trend.

Recently Selber had surgery, and she doesn’t run anymore – but she realized there are other options. “As I get older, I’m told, ‘Keep your core tight, do lots of squats’ – and it was like, perfect! I can ‘plalk,’ and I can do a lot of squats, and it won’t be about steps so much anymore as about squatting, and about being conscious and deliberate about what’s in front of me.

“So that’s how I got excited, and I began to do a lot of homework about it. And now wherever I go, I tap into their plogging community. Like in Mexico City – I was just there for work and to visit a friend, and she had no idea what I was doing. I kept picking up trash and then that night I posted in Plogging México” on Facebook.

She created a Facebook hashtag: #PloggingHouston. She promoted the idea of linking the movement with the Houston’s Adopt-a-Drain program. And she started recruiting others.

Kirby Chenkin was inspired to merge his twin passions: fitness and community service. “I just fell in love with it,” said Kirby. The idea dovetails with the self-improvement movement the marketing entrepreneur and fitness buff recently launched: KirBeBetter.

At first he got strange looks when he collected trash on his runs. Then people began to smile. “What I realized was that it sets a positive example for everyone who sees you do it. They’ll say, ‘Wow…maybe I should stop littering so much.’”

Plogging can be the perfect workout, he realized; technique is key, however, to avoid back injury. He created a video, which he posted on the #PloggingHouston page. Now through his KirBeBetter group, he organizes free monthly meetups with healthy food, live music and a plogging run.

“It all comes back to being natural with the environment,” he says. “It’s not about going to the gym and pumping iron – it’s about getting out there and connecting with your surroundings.”