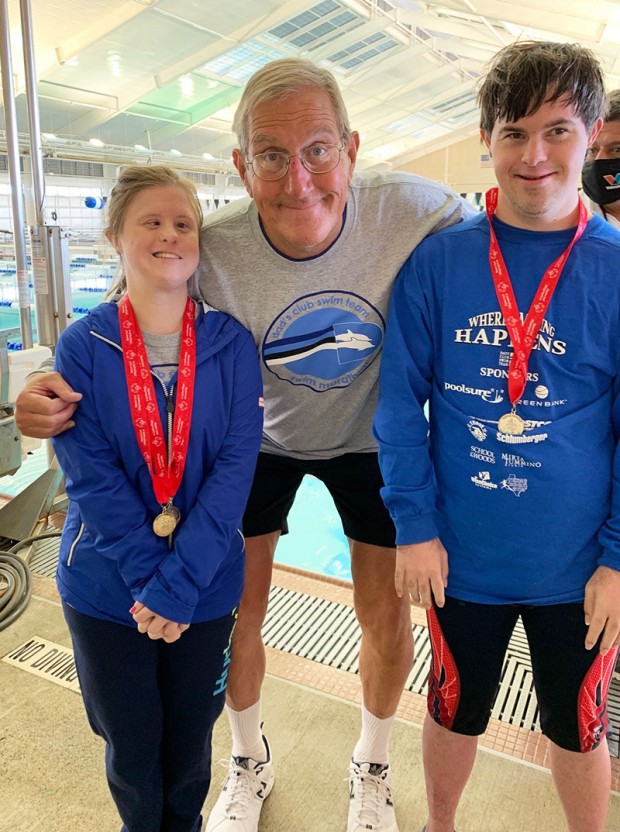 Katie Rutz and Brian Hale are all smiles with Coach Bruce.

The Houston Mavericks Swim Team is known for having medals (and hearts) of Olympic proportions.

Started in 1976, the Mavericks were the first Special Olympics swim team in Texas. The group was founded by Moonyeen “Moon” Weiss, a mom and longtime head coach. She passed away in 2018 and leaves a special legacy. The original team consisted of four members; now, the team has 40 swimmers, ranging in ages from 9 to 70, many of whom have been part of the team for years. 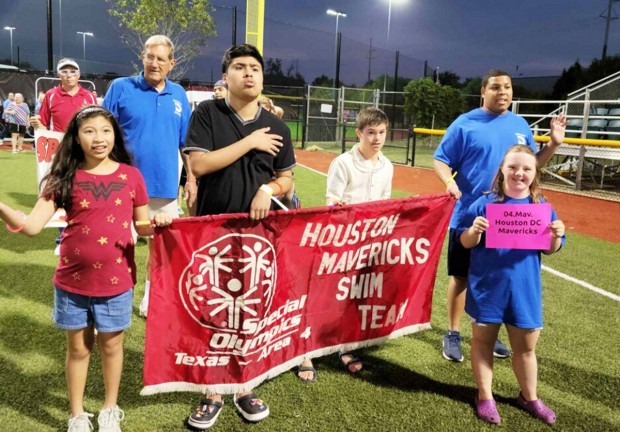 Bruce Rollins, current head coach of the Houston Mavericks, is a big fan of the pledge. “It is touching to me and probably key to our competitors giving it their best and accepting the results. Being brave in the attempt is something I think everyone could relate to in any endeavor.”

Bruce, who’s been with the Mavericks since 2012, relayed some thoughts on coaching the team over the years. “Honestly, it is just a series of highlights for the swimmers and the families. [It’s a highlight] anytime a swimmer learns how to do something better than before – which is not only in swimming, but listening, being a great teammate, sportsmanship, or just smiling because they know we as coaches and parents were watching.”

The team trains year-round, practicing for an hour every Sunday, thanks to pool time donated by Dad’s Club Aquatics in Memorial/Spring Branch. 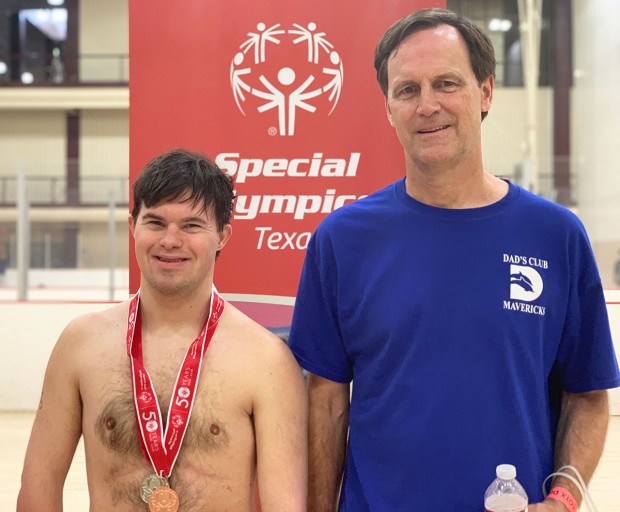 Brian Hale proudly wears his 2019 State Special Olympics medals while posing with his dad, Chuck, who is one of the swim coaches.

Coach Chuck Hale said, “I enjoy working with the swimmers, encouraging their effort and helping them improve. It’s a special reward to see them take pride in their own effort and accomplishments.”

Chuck’s son, Brian, is 33 and has been with the Mavericks since he was 15. Brian has limited vocabulary, so his dad helped share Brian’s thoughts. “My wife, Barbara, and I know Brian likes the swim meets and enjoys being with his team and all the special athletes. There is an atmosphere of excitement at these events because all the swimmers know they have worked hard. The competition is a celebration of their accomplishments, no matter where they finish in the races. When Barbara and I ask Brian about the swim meets he says: ‘Fun’ then he lists his strokes: free style, backstroke.”

Brian’s longtime friend, 32-year-old Katie Rutz, joined the Mavericks in 2000. Katie’s mom, Pat, shared, “Katie loves games and sports but there weren’t many opportunities in her life to get good at any of them. Katie may not be the fastest but is a very good swimmer who has improved at meets and become more confident. She enjoys the sense of belonging to a team and cares about her teammates.” 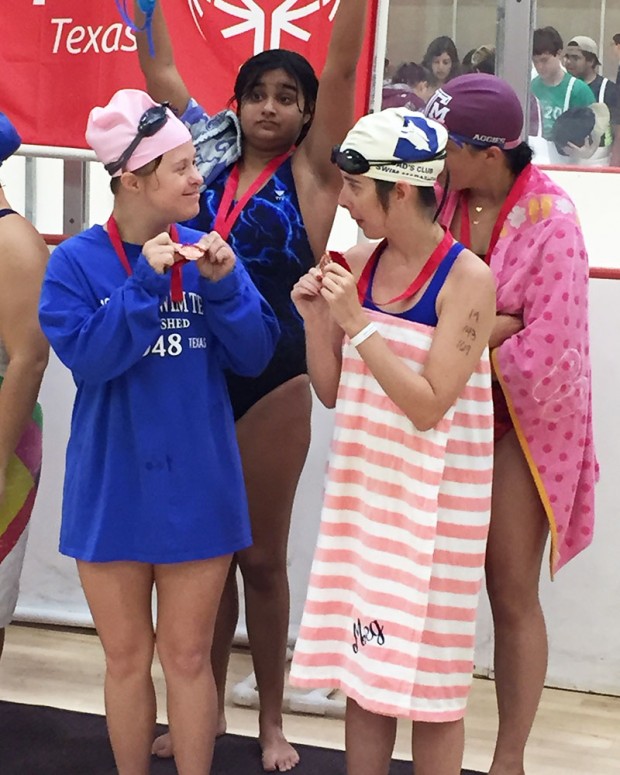 Meg Norman, 39, has been on the Mavericks for 18 years. Her mom, Joan, highlighted some of Meg’s favorite things. “Meg loves the people on the Mavericks. She likes being the 'big sister' to the younger swimmers.” Meg experienced some celebrity moments when she was interviewed on national television as a participant at the National Special Olympics in Lincoln (2010) and Seattle (2018).

Coach Christine Steiner said, “As a coach, it is inspiring when a swimmer who is terrified to do something like placing their face in the water, jumping into a deep pool for a race, or swimming backstroke all the way across without a coach’s hand, etc., and then they do it! And more often than not, they are so excited and it is such a confidence boost that they are ready to tackle the world!” She started volunteering with the Mavericks when she was a 17-year-old student at St. Agnes Academy as part of her senior service project, and is still there, almost 20 years later.

Christine described: “The State Meet [the Fall Classic] is the ultimate end-of-season event. There are prelims, awards and stands packed with cheering people (including Texas A&M ‘celebrity’ swim team members). A huge highlight is Friday night’s Opening Ceremonies. About 500 athletes for swimming alone, as well as participants for other participating sports (softball, golf, and bocce). Teams parade in when their name is announced, and the Special Olympics torch is passed. The celebration revs up with a dance party finale complete with loud music and dance teams joining in the fun.”

Christine laughed, “We dance until we are so tired and decide we better go to bed if we are going to be able to swim well in the morning!” 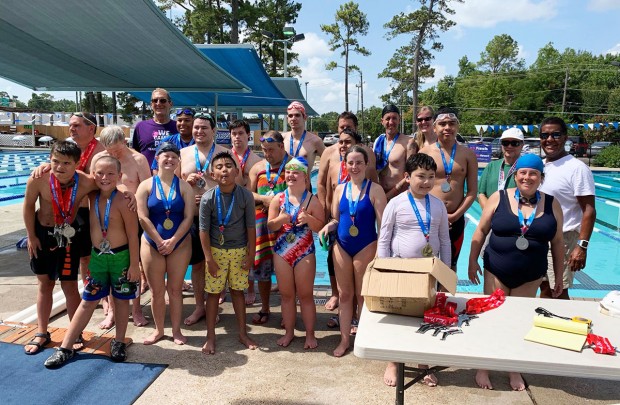 The Mavericks pose for a group photo after at a mock swim meet. Coaches in the photo include Coach Bruce Rollins (back row, on left, wearing purple), Coach Christine Steiner (back row, toward the right, wearing sunglasses), and Coach Jorge Mijares (far right).

Head Coach Bruce Rollins agreed, “We rocked out until I declared I was leaving to go rest for the next day! Special Olympics did a great job of putting The Fall Classic together and the folks at College Station always rise to the occasion.”

This year, Mavericks participated in freestyle, backstroke, breaststroke, butterfly, individual medley, and relay events at the Fall Classic, earning many medals. (The team did not keep track of medals earned overall.) All of the coaches, teammates, and families are looking forward to next year. 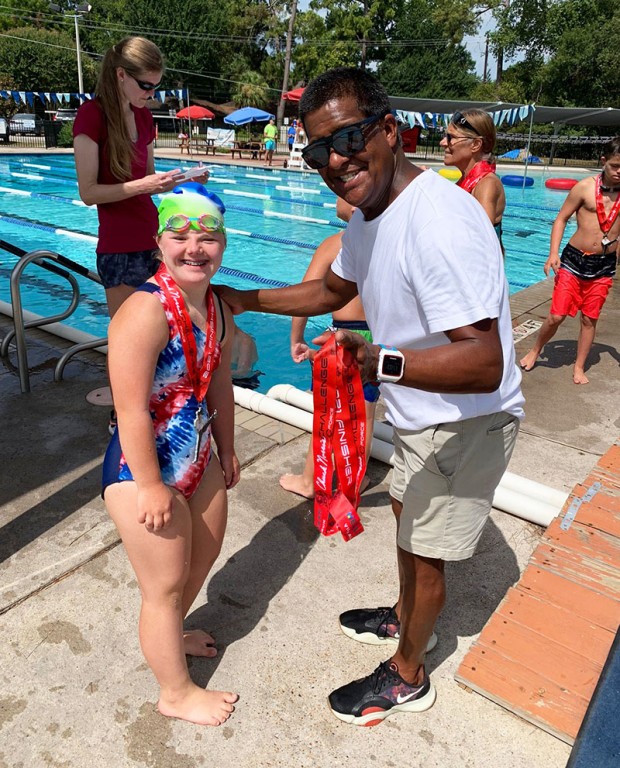 The Mavericks 2022 Summer Mock Swim Meet was a great way to get ready for the fall Special Olympics Swim meet.

Mavericks team swimmers and coaches, keep up the great work and thanks for being an inspiration!