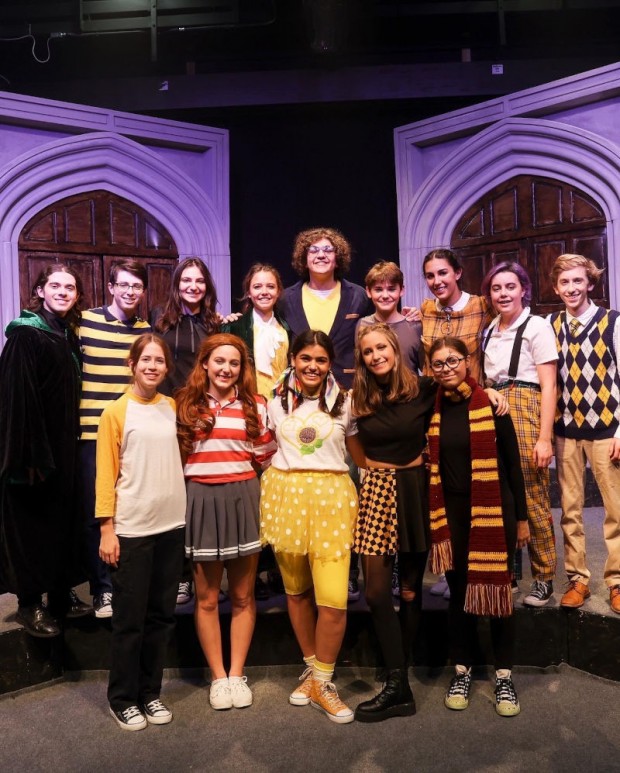 The cast of Puffs poses for a picture before a performance.

At the very head of the theater season, Emery students can always expect the fantastic Upper School Play to kick off the year. Whether it be a modern satire or a classic drama, the cast members always manage to pull together a riveting show, selling out performances in an instant.

This year’s opener was Puffs, a comedic Harry Potter parody centered on the adventures of the Hufflepuffs. It focuses on the life of the protagonist Wayne Hopkins as he navigates life as a wizard, makes friends, and faces off against the evils of the magical world. In other words, it’s a lively, silly, and enjoyable show!

Of course, the play itself was amazing: the combination of the fantastic elevated set, the hard work of the tech crew, and the creativity of the director had the audience at the edge of their seats for the entirety of the performance. The constant rehearsals, set-building, and frantic quick changes behind the scenes really paid off, and the cast was able to enjoy every moment on stage.

Actors Alex Levy, Bella Phelps, and Jack Paransky, among many of the other cast members, were incredibly grateful for this experience, and continue to learn from the theater program at Emery.

Levy, a sophomore, starred in the leading role of Wayne and was absolutely thrilled about his first-ever Emery production. “I was nervous going into the show, I'll be honest,” he admitted, just hours before opening night. “I wasn't sure what it was going to be like [and] I didn't really know too many people in the group.” However, this mentality of his would soon be changed, as Alex found himself loving every minute of rehearsals, performances, and the moments in between. Overall, the actor says that theater at Emery allowed him the “chance to explore a whole new side of [him],” and that thanks to this experience, he has “learned [he] loves acting,” especially when expressing his energy on stage.

On the other hand, Phelps, a junior, who played Harry, is a total theater veteran, having been in every Emery show since the 6th grade. With a whopping 13 shows thus far, she’s not planning on letting up, and Puffs is yet another play to add to her growing repertoire. In her words, “[theater is] pretty much [her] entire personality,” and she has embraced this love for acting wholeheartedly. As a whole, Phelps agreed that being a part of the school’s theater community has “taught [her] a lot of things, like how to be able to engage with people [she] wouldn’t usually want to talk to,” and how to feel comfortable in public speaking.

Similarly, Jack Paransky, a senior, who played the role of the narrator, also feels that theater at Emery has acted as both a space for joy and for developing his passions. “I love the fact that I can improv,” Paransky said in a recent interview, describing one of the multiple characters he played in the show. Jack often adds his own twist to each part he plays, however, if it weren’t for the confidence he built up through his years of theater experience, this would not have happened. “Theater has shown me how much I love to tell stories,” Paransky explained after the last performance. “It gave [him] a vehicle to tell tales that an audience can listen [to] and empathize with,” allowing him to truly be himself, even while acting as someone else.