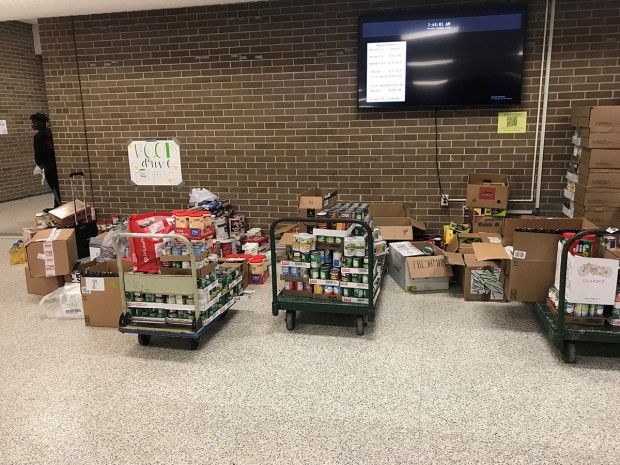 On Friday, October 28, Stratford and Memorial played their annual rivalry football game. Fans showed up and filled Tully Stadium to cheer on their respective teams despite the drizzling rain and Astro’s World Series game being played at the same time.

One rain-soaked fan explained, “It is an annual event for our family, and we wouldn’t miss it for anything.”

Each year as part of the week-long festivities associated with the big game, students from both schools take part in a friendly competition to collect canned goods for local food banks. The competition started back in 2017 and has grown significantly each year.

This year, the schools exceeded all expectations and collected a combined 796,724 cans for donation.

For comparison purposes, Stratford Principal Raymorris Barnes published Stratford’s previous collection numbers, pointing out how Stratford collected 17,502 cans in 2017, a number that rose to over 109,000 cans in 2021. Last year, Memorial added 102,000 plus cans to Stratford’s collection efforts for an amazing total donation in excess of 211,000.

However, this year’s competition met new heights, when Principal Barnes promised Stratford students one fall final exam exemption if they were able to beat Memorial. When the final tallies where announced, both schools had topped 398,000 cans each.

As Principal Barnes reported in his weekly address to Stratford families, “there are no losers in this contest, both schools won; but more importantly, the local food banks and pantries will have almost 800,000 canned items to share with families in need within the greater Houston area.”