The Pull of Tractors 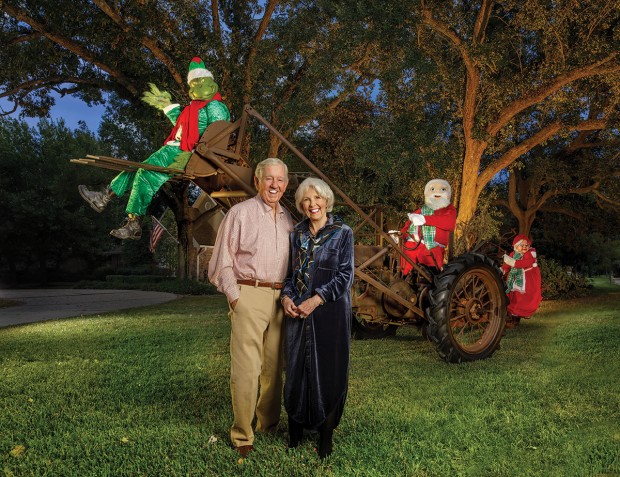 TRACTOR BEAMS Van and Bridget Burkhart stand in front of this year's holiday tractor on their front lawn. (Photo: hartphoto.com)

Van Burkhart’s earliest childhood memories are of his grandparents’ farm, and in particular, of the tractors on that farm. Of the first one he can remember, he says, “I always wanted to ride that tractor, and my grandfather would start it up for me. I had no idea at the time that he had to work so hard to get that big old John Deere tractor going.”

Van, age 77, explains that the tractor, which had to be hand-cranked to start, was what’s known as a “Poppin’ Johnny,” one of the two-cylinder tractors John Deere made from about 1918 to 1960. They get their nickname from the distinctive “pop, pop” sound their engines make.

This year, the same kind of “Poppin’ Johnny,” a 1936 John Deere B, sits on Van’s lawn in Tanglewood, adorned with Christmas lights and the figures of Santa Claus, Mrs. Claus, and in a very rare antique manure loader attached to the front of the tractor, the Grinch. 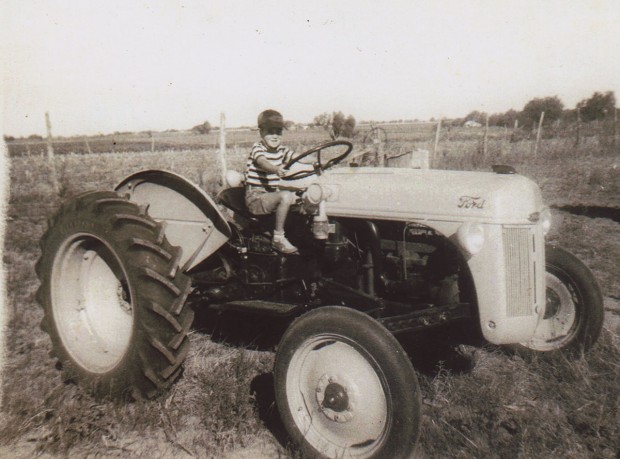 A young Van on the second tractor he can remember from his grandfather’s farm.

Every year, Van hauls a few of the antique tractors and their implements from his collection, kept at his farm in Limestone County, about a 2½-hour drive away, to decorate his yard for the holidays. He’s been doing this since 2010.

People stop to take pictures and ask about the tractors. “Dad loves that,” says Van’s daughter, Lizzy, who lives nearby and helps set the equipment up in the yard every year.

Van tells a story. “I was picking up my dry cleaning and gave the woman behind the counter my address,” he says. “She said, ‘I know right where you are. You’re near that bozo with the tractors in his yard.’” He laughs.

Van has about 25 tractors that are completely restored and roughly about 100 more that he has fixed to the point that they run. (“Well,” he clarifies, “They have run. You can’t just walk out there and crank them up, but they have run.”) Lizzy estimates that he has over 100 more tractors that have yet to run or that he’s using for their parts. He keeps them at his farm outside Groesbeck, stored in several barns. He also has an air-conditioned workshop there to work on them. 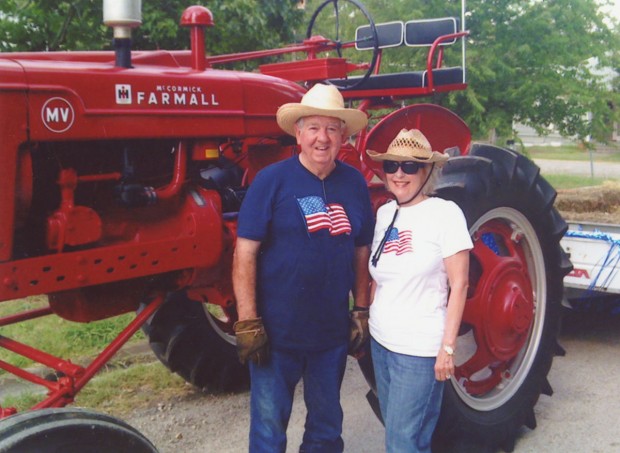 Why is Van fascinated with tractors? Well, for one thing, they remind him of his grandparents’ and parents’ stories about farming. “It was a tough, tough, tough life,” says Van. “My parents could remember my grandparents having mules. In fact, when my grandparents bought their first tractor, which cost as much as a house, they couldn’t keep it running, so they switched back to mules for several years. Tractors back then were just so unreliable.”

But Van is also one of those people who just has an affinity for and an appreciation for machinery. (We call these people “handy” and ask them to help us when something of ours breaks.) This affinity has been a theme throughout his remarkable life.

He was a senior at Baylor University when he went to see an air show performed by the Blue Angels, the flight demonstration squad of the U.S. Navy. “That’s the first time I had ever been that close to high-performance aircraft,” he remembers.

Perhaps not coincidentally, two weeks later, there were recruiters for the Navy’s Aviation Officer Candidate School on the Baylor campus. Van signed up, and after passing both the written and physical exams, he was in. He graduated from Baylor on a Saturday; the following Monday, he reported for duty in Pensacola, Fla. 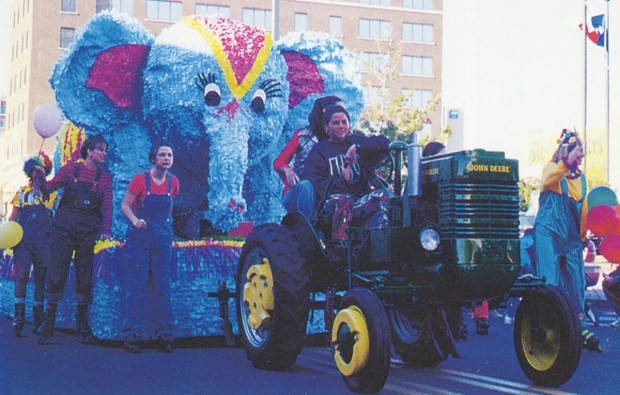 He went through almost 18 months of general flight training to “earn his wings,” then an additional number of months (“four months, at least,” Van says) of training on the aircraft he would fly, the A-3. The A-3, to this day, is the largest aircraft, at about 70,000 pounds, to ever operate on an aircraft carrier. “It’s right at the limits of weight,” says Van. “In fact, it’s the only jet that doesn’t have ejector seats because they were saving on weight.”

His last training requirement was to perform six night-time landings onto an aircraft carrier. Van performed his, on the USS Constellation off the coast of San Diego, on the night of July 20th, 1969, the night of the Apollo 11 moon landing. Van and his fellow aviators were watching that first moon landing on television as they waited their turns. “I thought, ‘Boy, I don’t think that guy (Neil Armstrong, about to walk on the moon) can be any more scared than I am right now,” Van remembers with a chuckle.

Van went on to fly 160 missions during the Vietnam War and eventually became a Navy flight instructor for the A-3. The A-3 plane now on display aboard the USS Lexington in Corpus Christi is a plane that Van flew.

After the Navy, Van flirted with the idea of becoming an airline pilot, or rather, the airline companies flirted hard with him. As an A-3 pilot and a flight instructor, he was the perfect candidate. By now married with a young child, though, Van did not want to be away from home as much as an airline pilot would be. 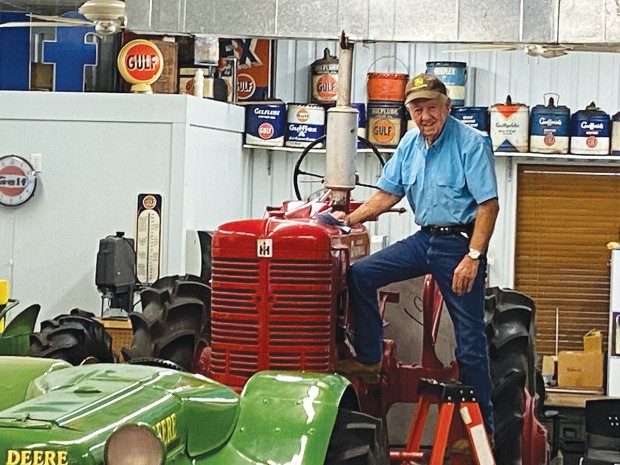 Van working on a tractor at the family’s farm

He decided to come home to the Houston area. One of his brothers-in-law introduced him to the owner of Alamo Barge Lines, a marine-transport company that ran pushboats up and down American rivers. A cousin to tugboats, pushboats, as their name implies, push, rather than tug, their barges. The owner of Alamo invited him to take a two-week ride back and forth from Baton Rouge to Chicago on one of the company’s pushboats to see if he’d like to work for the company.

Van did like it. His job, in operations, included building pushboats from scratch and buying old pushboats and modernizing them. It was his favorite part of the job.

Eventually, he started his own company, Capital Towing. By the time Van retired, his company was running 14 pushboats. “There are very few places on the major waterways in the U.S. that our boats didn’t go,” he says. 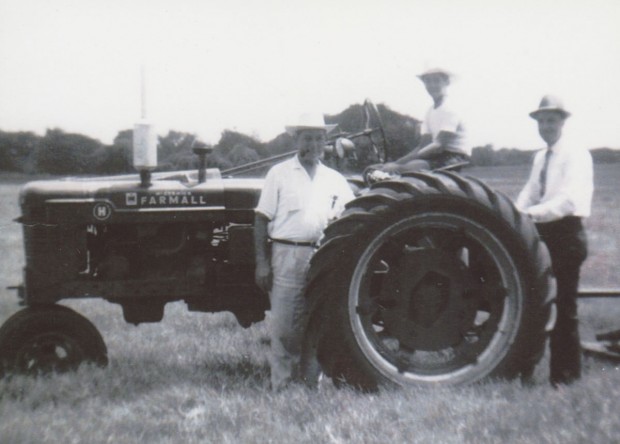 A teenaged Van, on the tractor, with his uncle John Earl Laurence (left), who owned the farm Van now owns.

By the time his children, Lizzy and Jake, were at Memorial High School, Van started to become interested in antique tractors. “I went from jets to pushboats to tractors,” he says with a laugh.

The tractors have been fun for the whole family. They’ve often driven them in parades in Groesbeck. Lizzy and Jake drove them in homecoming parades while at Baylor. “I remember watching Lizzy drive a ‘Poppin’ Johnny’ in a Baylor parade,” says Van. “A man in front of me said, ‘Look at her go! That gal grew up on a farm!’” Van smiles. “That gal grew up in Memorial.”

Van, his wife Susan, Jake, and Lizzy lived in Hunter’s Creek. Tragically, Susan died of cancer in 2001. A few years before, the husband of Susan’s friend Bridget Murchison died of a heart attack. Van remembers being at Spencer’s funeral with Susan. “I would never have thought I’d be there just a few years later for Susan,” he says. The two families had known each other for years, lived several blocks apart; the children of both families went to school together since pre-school. Years later, Van and Bridget met again at a pre-wedding party for some friends of their children. They ended up marrying in 2004 and moved from Hunter’s Creek to Tanglewood. 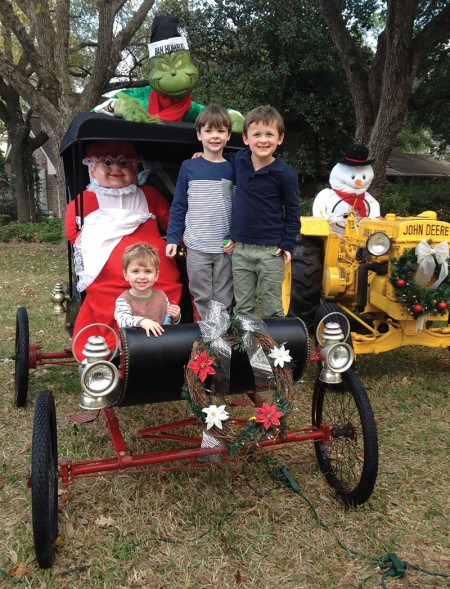 some of Van and Bridget’s grandkids – Jack, George, and Spence Murchison – with a tractor decorated for the holidays

Van is far from alone in his love of antique tractors. While his hobby has more adherents in rural areas in the Midwest than in Houston, there’s a whole community of antique-tractor lovers and experts out there. “With this hobby, I have met so many interesting people,” he says. There are companies that make replacement parts for these antique machines. There are auctions and tractor shows. One of Van’s favorites, held by the Texas Early Day Tractor & Engine Association, takes place in Temple, Texas every October. There are reference books and websites and magazines devoted to specific types of antique tractors, such as The Green Magazine, about John Deere tractors, which are green and yellow, or Red Power Magazine about Farmall tractors, which are red.

When Van first started collecting tractors, he saw that one of a model his paternal grandparents had, a Bull tractor, was going to be sold at an auction in Arizona. Bull tractors are distinctive because they have three wheels, with just a single wheel in the front. “I thought maybe I’ll go out and buy that old Bull because that’s the first tractor my dad could ever remember,” says Van, “but when I got out there, they said the first bid on it was $30,000, so … maybe not.” That particular tractor, which was not fully restored, though it did run, eventually sold at the auction for close to $60,000. 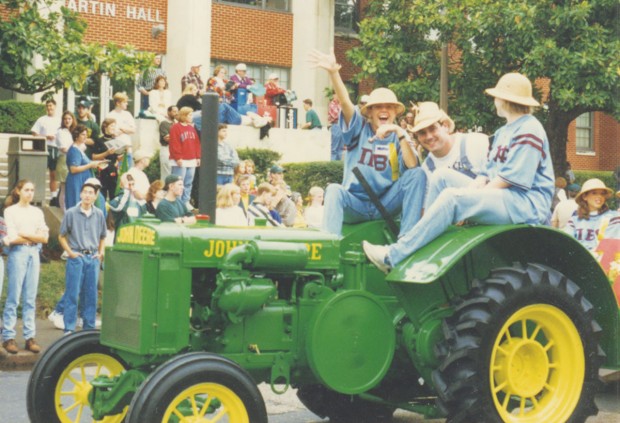 Part of the appeal of his hobby for Van is the tinkering. “It just puts a smile on my face to get something running that hasn’t run in 30, 40, 50 years,” he says. Tractors are particularly satisfying to work on, says Van, because they are “simplicity in its best form.”

Studying all the different variations and developments in tractors and their implements, such as corn binders and front loaders, also fascinates him. “It’s the history, the appreciation for those generations who went from using horses and cutting wheat with sickles to becoming more mechanized,” he says. 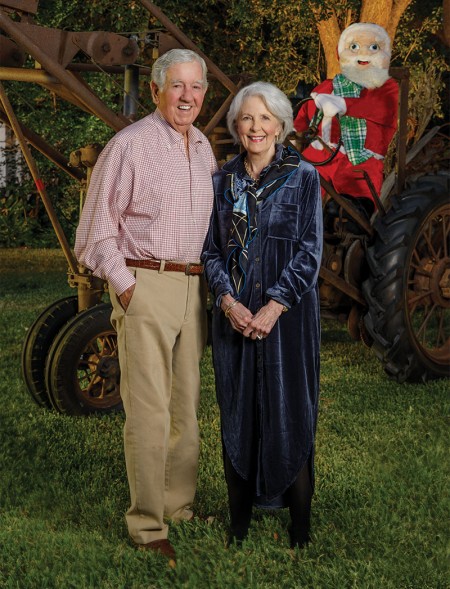 Van Burkhart (pictured, with wife Bridget) collects and restores antique tractors. During the holidays, he decorates and displays tractors in his yard. (Photo: hartphoto.com)

Ironically, when it comes to collecting, some of the rarest and most desirable tractors and implements are the ones that were, well, flops in the marketplace. Perhaps they were too expensive, or they were dangerous to operate, and therefore, only a few were made. In other cases, very specialized tractors, such as ones designed to be thin and streamlined to work in orchards between the trees or a kind of Farmall tractor that was only used in the sugar-cane fields in Louisiana, are rare and desired by collectors.

Van knows that antique tractors are not to be found in rural areas that were close to railroad lines because, during World War II, farmers were encouraged to donate old equipment to scrap-metal drives for the war effort. He can look at an old tractor and know that it came from West Texas because of the way it rusted, or rather, didn’t rust, over the years. He can recognize when a tractor has an unusual set of wheels on it or an unusual transmission, making it more collectible.

The Texas Early Day Tractor & Engine Association, which runs the annual show in Temple, has the slogan, “Saving yesterday for tomorrow.” Van does that as well. He loves bringing them to Tanglewood for people to see.

“People will stop and ask me if they can take pictures of them,” says Van with a smile. “Of course. That’s why I brought them here.”