Not a memoir, Part 2 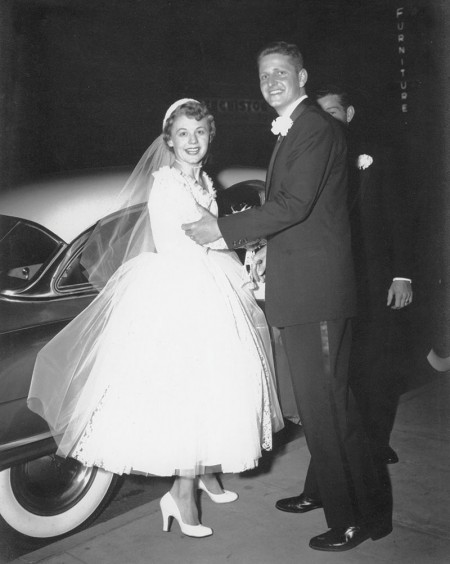 MEET CINDY’S PARENTS Sandra and Clymer Wright on their wedding day, nine months and two days before Cindy was born.

Allow me to introduce you to my sponsors, Sandra and Clymer Wright. It’s their wedding day, February 12th, 1954 in Biloxi, Mississippi. She was 19. He was 21. I would come along nine months and two days from the date of this picture, much to my grandmother’s relief, on November 14, 1954. We three kind of grew up together.

One complaint I have about my parents is that they weren’t travelers.  Typical of who they were, no honeymoon. They were headed to an army base in Ft. Benning, Georgia, where Dad would be stationed for basic training. The Korean War officially ended that summer, yet somehow the army nabbed him. So I was conceived somewhere along the road to Ft. Benning, Georgia. I hope they got a room.

I thought about calling this piece “She Should Have Married the Catholic.” Mom would say it a time or two when she was particularly frustrated with Dad. She was kidding. I think. But the truth is, Mom’s mother, Leola Lee, played an important role in diverting my parents toward one another. I should add her to my sponsor list.

It seems that Mom was engaged to a Catholic boy right after high school. Her Baptist parents thought their daughter’s mortal soul was at stake. They made her wait by sending her to college. In the '50s, it wasn’t common to send your daughter to college, unless it was to get her MRS degree.

My grandmother, Leola, who I would call “Mimmie”, arranged a tour for herself and her daughter on the campus of Southern Mississippi College in Hattiesburg, Mississippi. Mom expressed an interest in journalism, so the student tour guide led them to the journalism department first thing.

There Sandra Lee, my engaged mom, met Clymer Wright, editor of the Student Printz campus newspaper. Leola took one look at this tall, handsome editor, gambled on him not being Catholic, and dismissed the tour guide. “This young man will give Sandra the rest of the tour,” my future grandmother directed, as if she were the college president.

Dad turned out to be Methodist; not ideal, but, in her mind, a hell of a lot better than being Catholic. Perhaps my grandmother forgot about her own mixed marriage, she a Southern Baptist, my grandfather, a Primitive Baptist. Their marriage lasted over 60 years, though they never went to the same church.

After four months of basic training, Dad was shipped off to Korea, then to Japan, while Mom went back to her parents’ house in Biloxi, Mississippi to wait out his tour of duty. He was already overseas when she found out she was pregnant. My father wouldn’t lay eyes on me until I was almost a year old.

The news of his discharge from the army meant they could resume their original plans to move to Rosenberg, Texas where Dad would become editor of The Fort Bend Reporter. His grandfather, A.M. “Ikey” Cohen was a newspaper man, on the advertising side of things. Ikey bought the Rosenberg paper later in his life, with the understanding that he would put my father through college. In return, Dad would come back and help run the paper. His bride Sandra, who had completed her MRS, with two years as a journalism major, was an added bonus.

Mom’s sister Sylvia, “Aunt Sibbie,” was five years younger than Mom. She said the plan was for Mom and her family to caravan the six hours with two stuffed cars, to a tiny garage apartment in Rosenberg. This was way before seatbelts, car seats, air bags, etc. Get this, my grandfather, an auto mechanic, decided to take the entire backseat out of Mom’s car. He put my full-sized baby bed in its place. When I wasn’t in the baby bed, my aunt Sibbie was there to hold me in the seatbelt-less front seat. Aunt Sibbie’s job was to hold me so that Mom could drive, when I wasn’t in my crib chewing on lead-based paint.

Sibbie said Lee (his name was Omar Lee but everybody called him Lee) was appalled at the old Hudson car Dad bought Mom to drive. “You could see the road through the floorboard.”

Last month I said we’d talk about “Knives on the Left, Forks and Spoons on the Right” in this column. But it took longer than I thought to get everybody to Rosenberg. I’m exhausted. I’m still in diapers, cloth ones with giant safety pins, that weren’t so safe. The scene is set. Next month I’ll set the table. Maybe.

By the way, Aunt Sibbie, Mom’s little sis, got married eight years after Mom, in 1962, to her childhood sweetheart, Bob Lee, a Catholic. They just celebrated their 60th anniversary and so far, lightning hasn’t struck anyone.